The description of the walk was:

Following in the wake of the popular south side Quirky Berkeley walk this past summer, we’re now off to discover the quirky side of northeast Berkeley. We promise lots of examples of Berkeleyans expressing their individualism through art, architecture, creative foliage and much, much more. We’ll begin at Live Oak Park and head up the hill in search of the eccentricities that make Berkeley, well Berkeley. The walk will cover just under 4 miles and we will take a break midway at Dorothy Bolte Park.

We met at Live Oak Park. 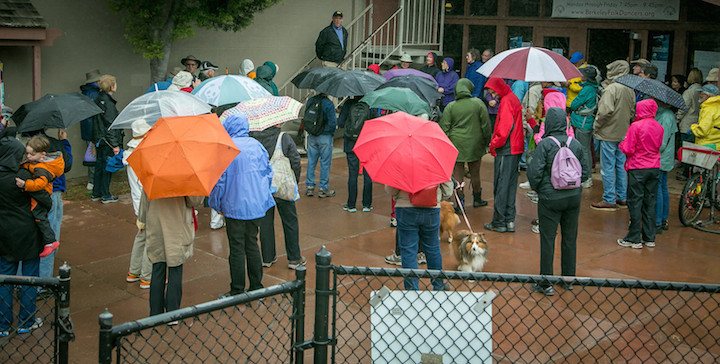 We counted 95 people at the beginning of the walk.  Not bad! 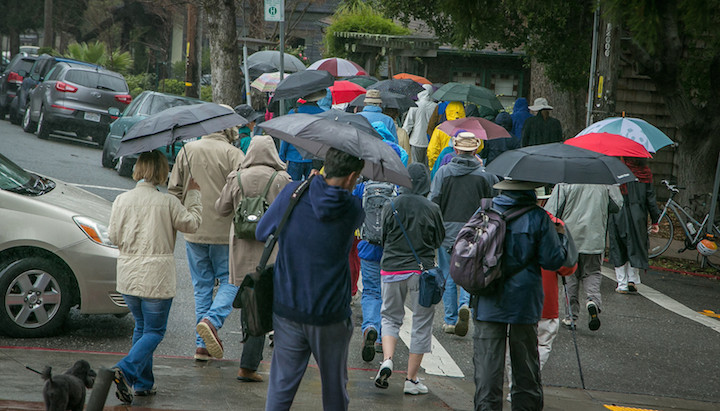 We crossed Shattuck to Berryman.  An army!!!! 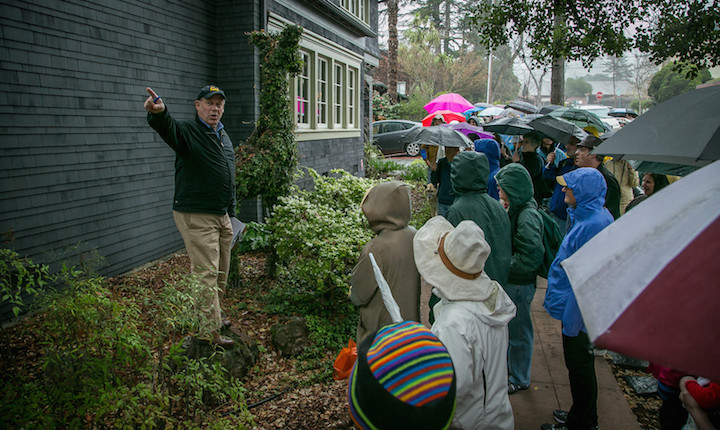 We admired the giraffe topiary and talked about other whimsical topiaries in Berkeley.  My  post about the quirky topiaries of Berkeley can be seen here. 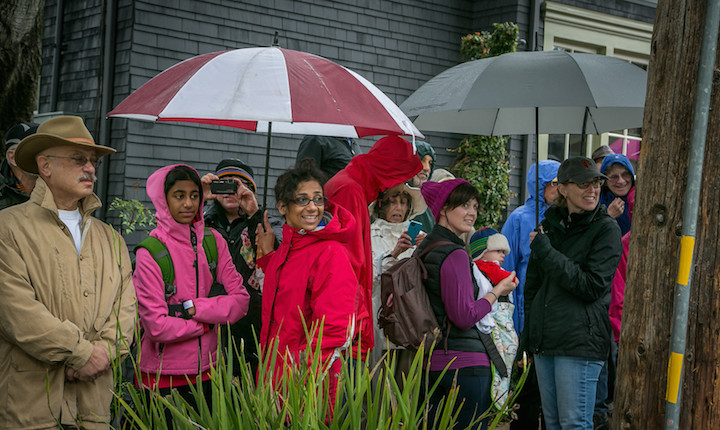 When the crowd turned around and faced south, they saw the biggest peace sign in Berkeley on the side of the Hog Farm Compound.

We walked back through the park and stopped on Walnut Street.  I pointed out the benches, the tile work next door, and extolled the soccer-playing virtues of Emily Lau, now at the University of California at Santa Barbara, from this house. 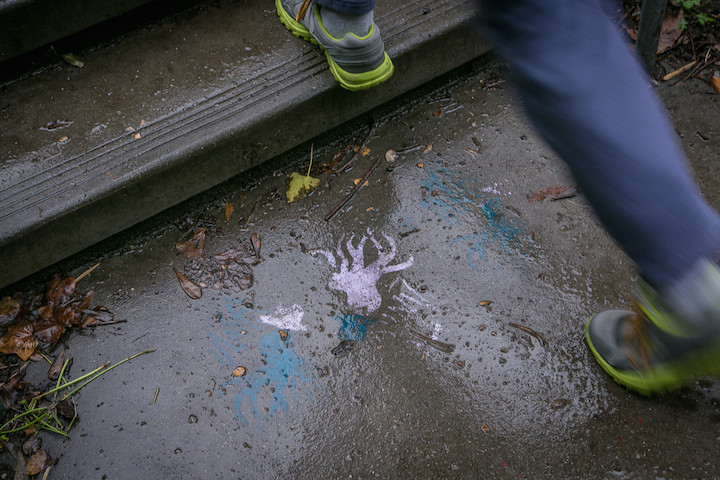 We then took paths east to Oxford Street and then east to Spruce.  It was pretty wet as you can see in this photo of Mr. Pants on the sidewalk.

On Spruce, we admired the monkey over the garage. 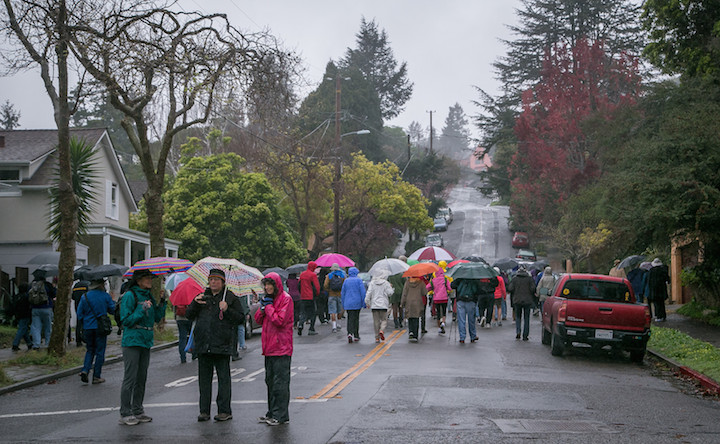 The army then went up Eunice to Arch, north on Arch to the Fierstein Buddhist shrine.  I blogged about the shrine here. 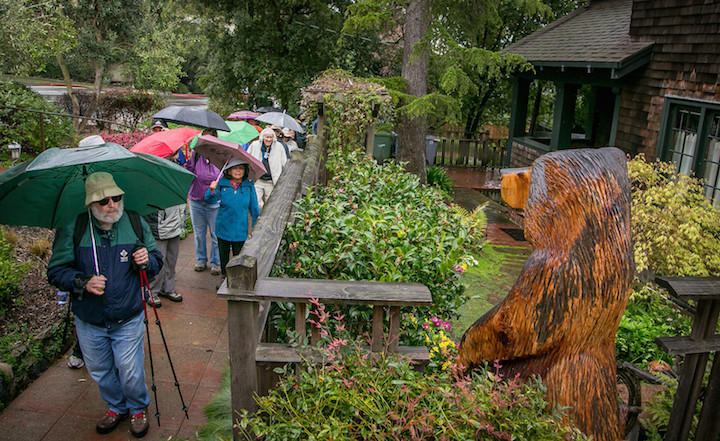 We then began to ascent of Spruce Street.  A carved bear!   I posted about bears here. 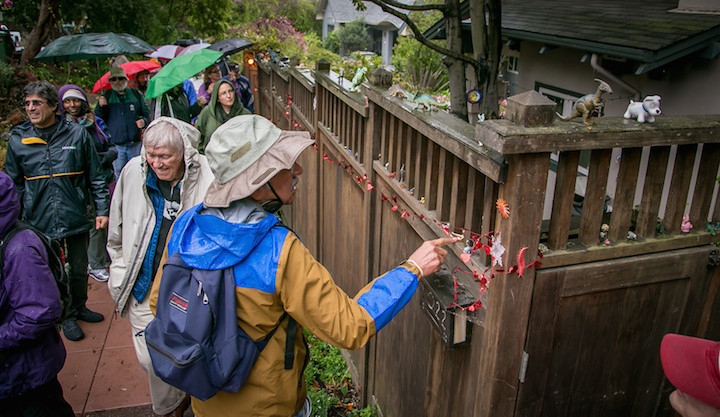 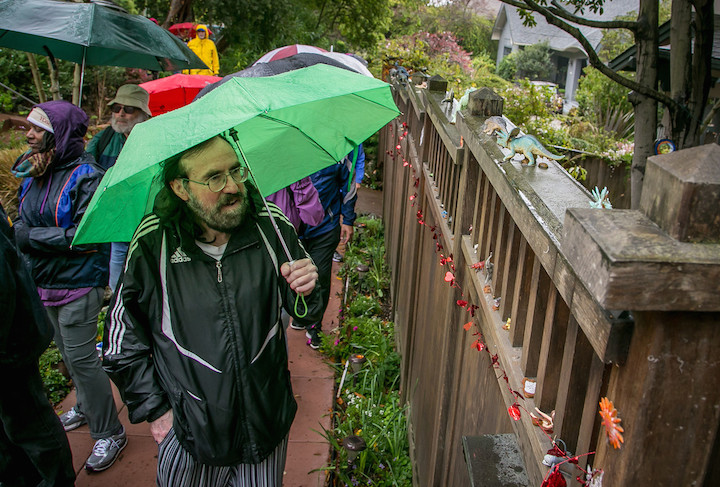 Dinosaurs!  My blog about dinosaurs in Berkeley is here. 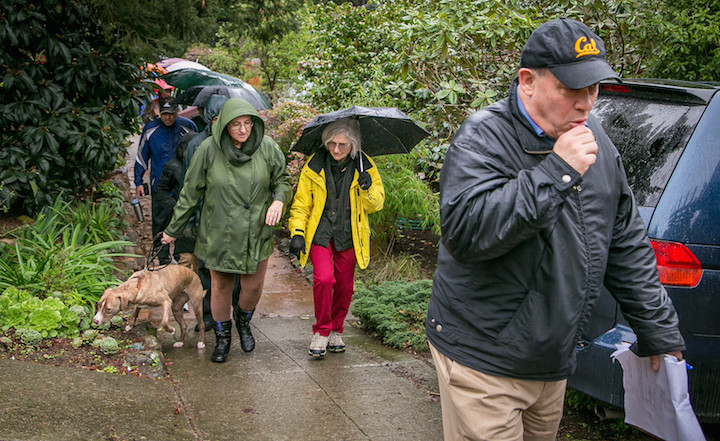 So much to explain!  My clip boarded notes are getting pretty soggy at this point.  That’s okay, I pretty much know this territory.  Although we did come across some quirky stuff I hadn’t noticed before. 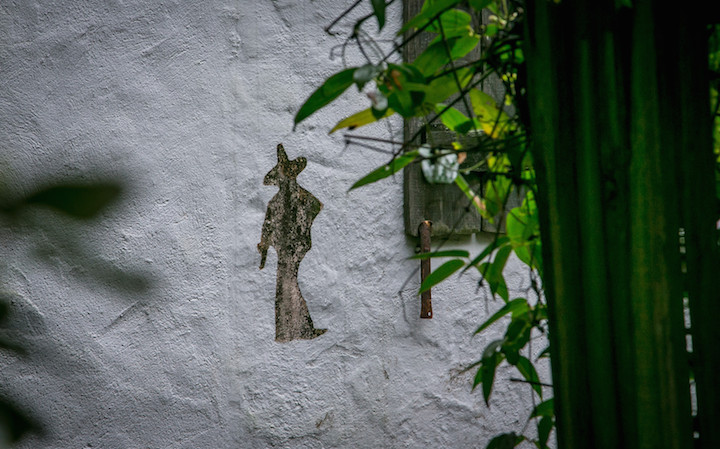 Him for one.  This was the first time I saw him. 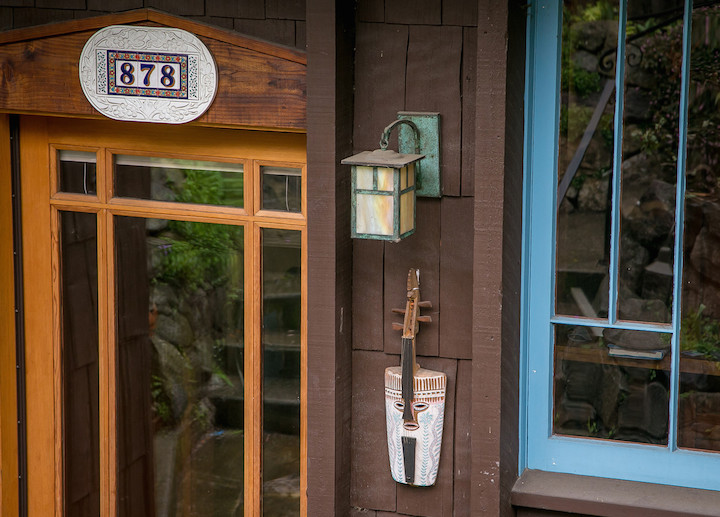 And this little piece of Tiki.  I have a certain fondness for Tiki images, and blog about Berkeley’s Tiki images here. 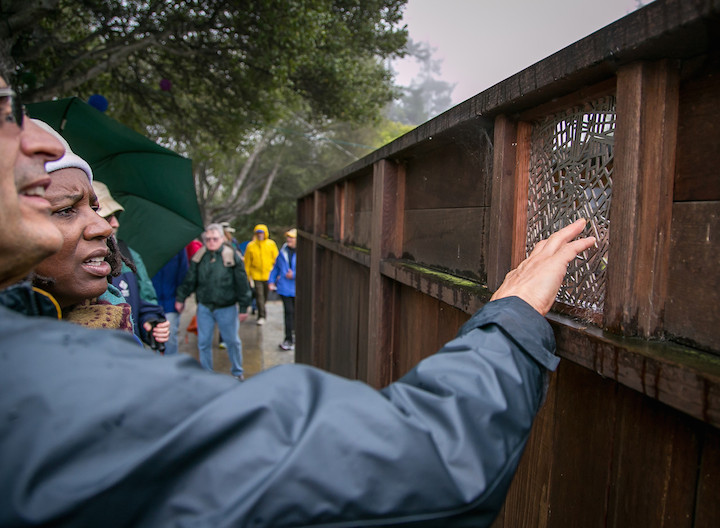 I first saw these vents the week before the walk when I was reviewing the route.  They are exquisite.  One suspects computer-assisted cutting of metal here.

We are near the turn-around point, and the rain meant no picnic in the park as planned. 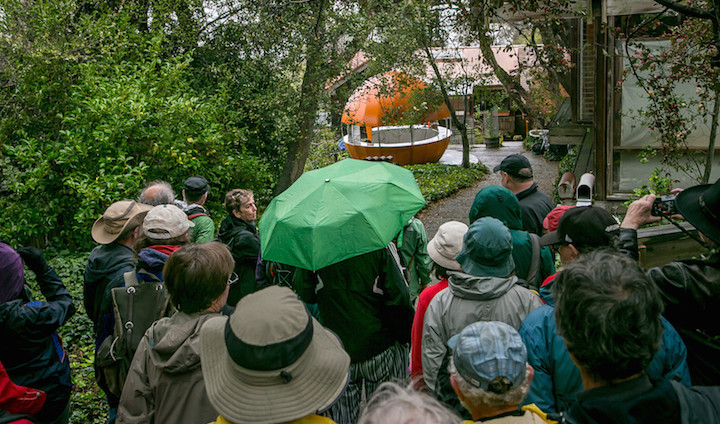 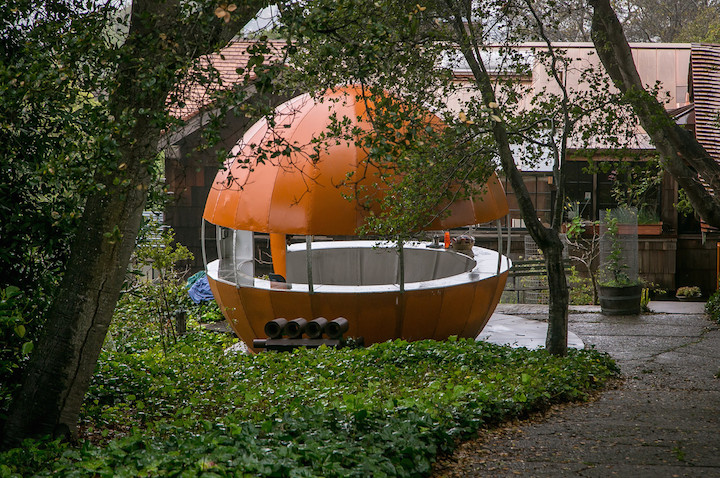 We get up close and personal with Bruce Dodd’s wonderful Giant Orange rescued from Chowchilla and restored by Bruce.  My post about the orange is here. 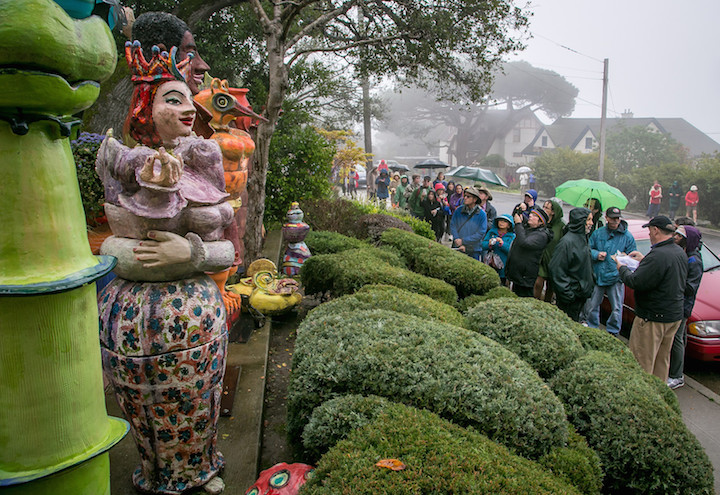 And then a little further up Spruce, on the east side of the street, are Buldan Seka’s giant ceramic freaks.  I blog about them here. 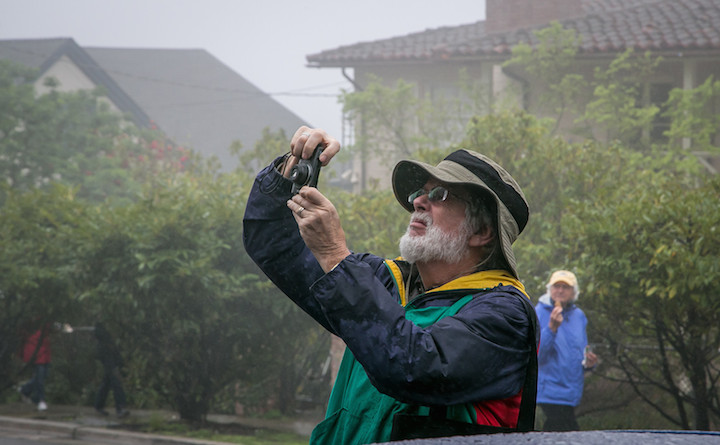 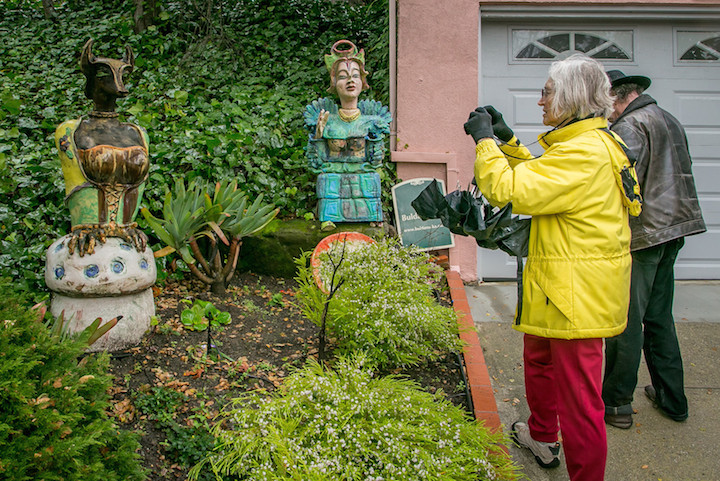 Speaking of photography, at this point in the walk, my photographer friend had to leave.  Dang!  The Official Quirky Berkeley Van dispensed Pepperidge Farm cookies and bottles of water.  Muriel Moore and Debbie Mazzanti and my youngest daughter Charlotte took care of the van and the cookies.

We then headed down the hill, without the Official Photographer.  We went west on Marin, admiring the skeleton playing a saxophone on the north side of the street, and then turned on Shattuck. 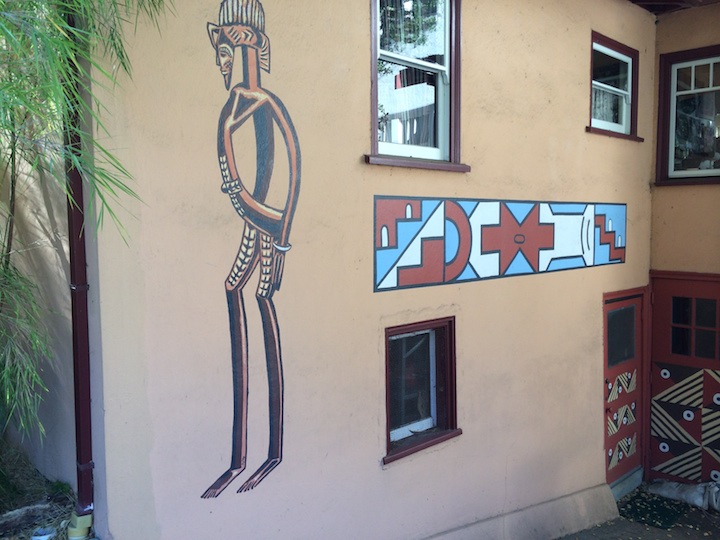 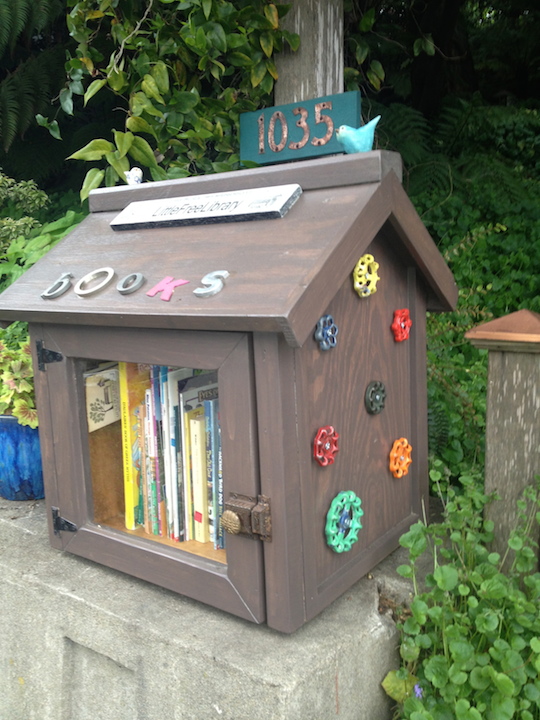 Colleen Neff was our guide for Shattuck, including her African-art neighbor’s painted house and her own Little Free Library.

It wasn’t raining at the end of the walk.  We still had 40 people walking two-plus hours and four miles later. That is really something.