Colleen Neff has played an important role in the Berkeley Path Wanderers.  She is a friend and neighbor, and has gone with me a number of times on my every-block-of-every-street Quirky Berkeley Quest.  She suggested that I lead a walk for the Path Wanderers.  Good idea!

We met near the Ashby BART station.  When we started, we were almost 80 strong. 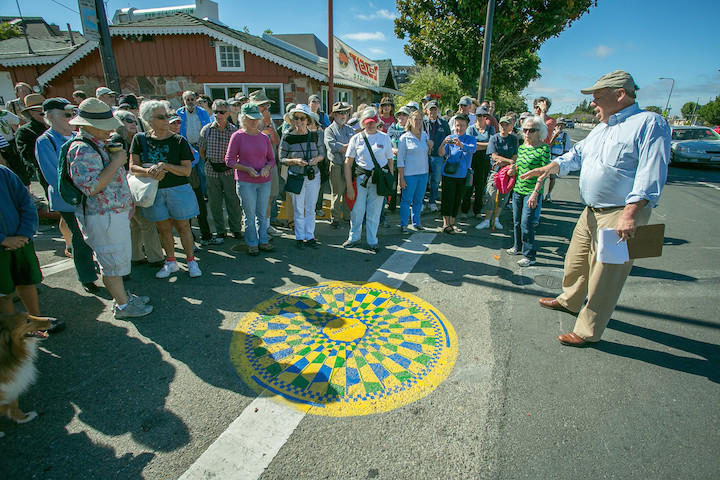 We started at Adeline and Emerson.  On the pavement is a color rendition of the black and white Imagine mosaic from Strawberry Fields, Central Park NY, based on a Greco-Roman design, a gift to New York from the City of Naples.  The Berkeley rendition honors Ignacio “Fito” Celedón who was murdered on that spot in September 2010.  His fiancée Amber Nelson commissioned the painting and created a small beautiful planting along the sidewalk fence. What an amazing and personal plea for peace this is.  I have more photos of it here 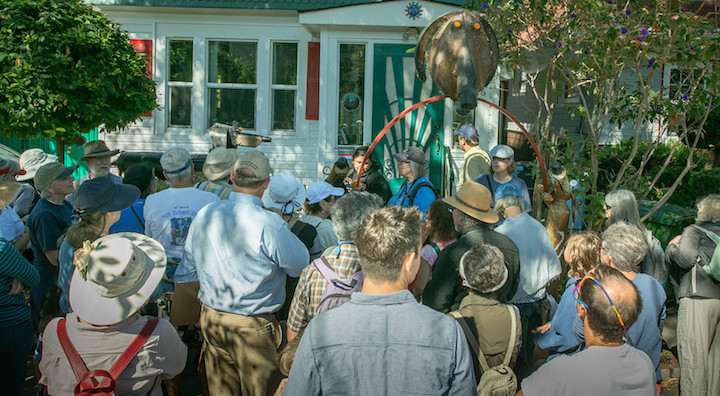 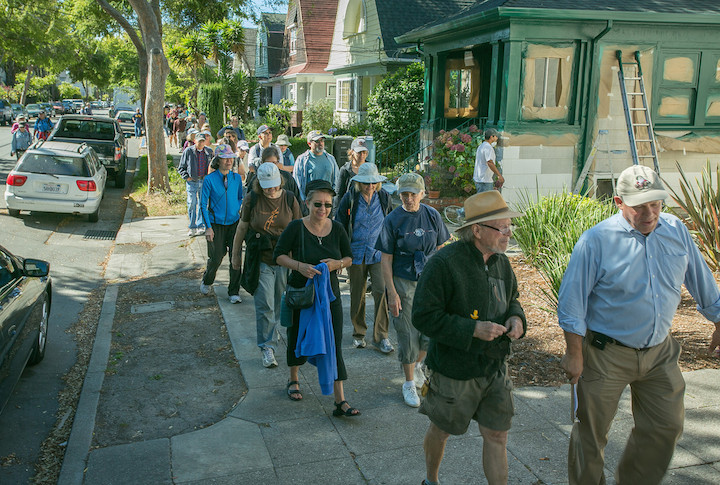 We walked west on Ashby and turned left onto Harper.  We marveled at Eni Greene’s artistic ode to doxies, which I blog about here.  Walking with me in the bottom picture is Ted Friedman. Ted has become a good friend.  He knows as much about Telegraph Avenue as anyone, and he co-lead Walk #3 with me in 2014. 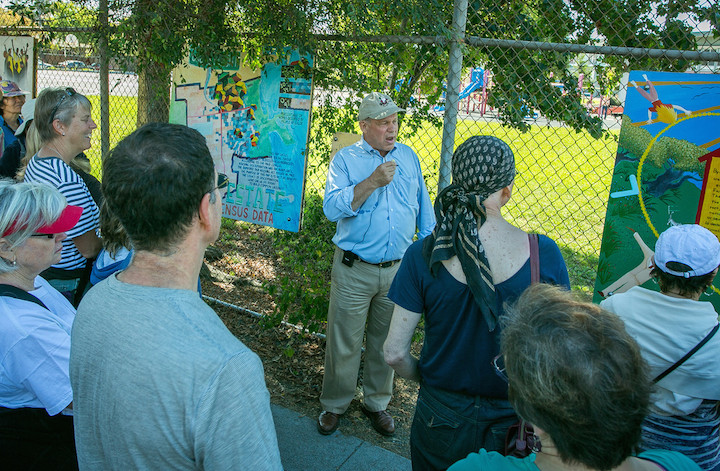 Walking west on Ashby we stopped and admired the small murals on the fence of Malcolm X School.  I did not know then about the steel sculptures in the school garden that Mark Bulwinkle helped students create, or we would have visited them. 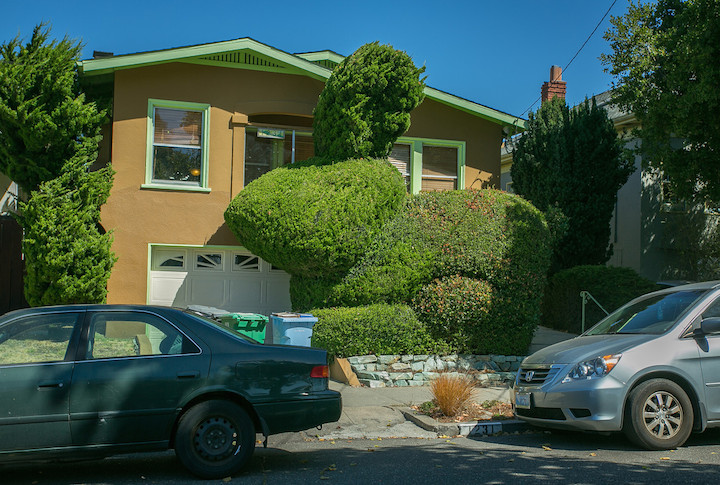 We continued east, stopping to see the bunny topiary at Ward Street.  Kathy Roha is an architect who was on the walk.   I didn’t know about the bunny, but she did.  Group participation!  My topiary blog is here. 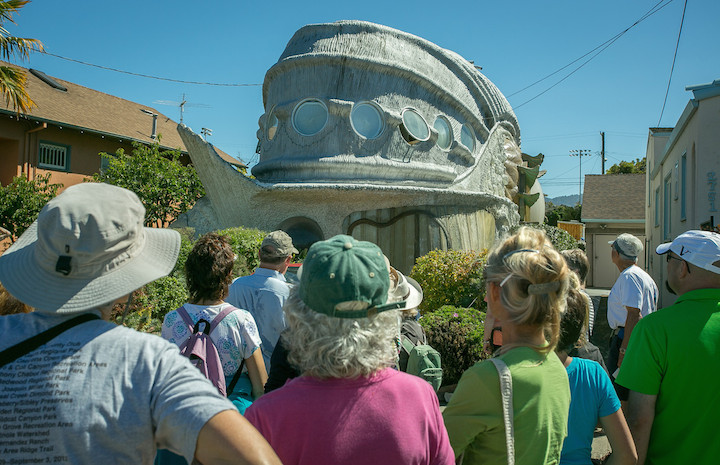 Next stop: the so-called Tsui Fish House on Mathews.  At my blog about it here you can learn that the house is designed as a tartigrade, which is NOT A FISH.  And you can learn more about the house and see more photos. 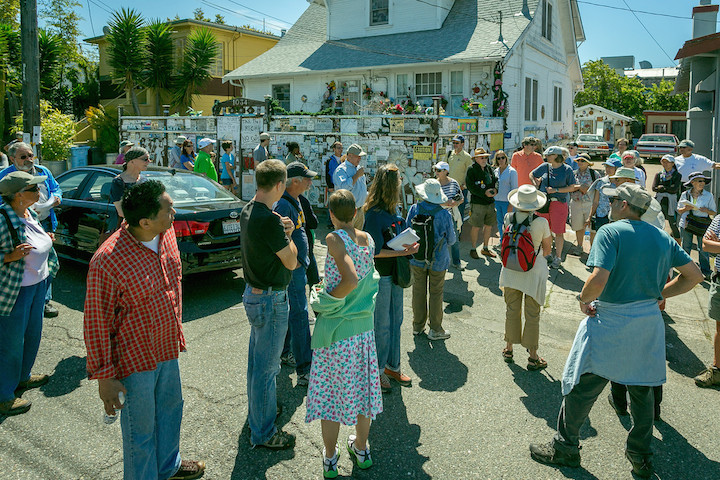 We soldiered down just across San Pablo to the Wall of Democracy on Pardee Street.  That is my name for it and it is named with respect, blogged about here. 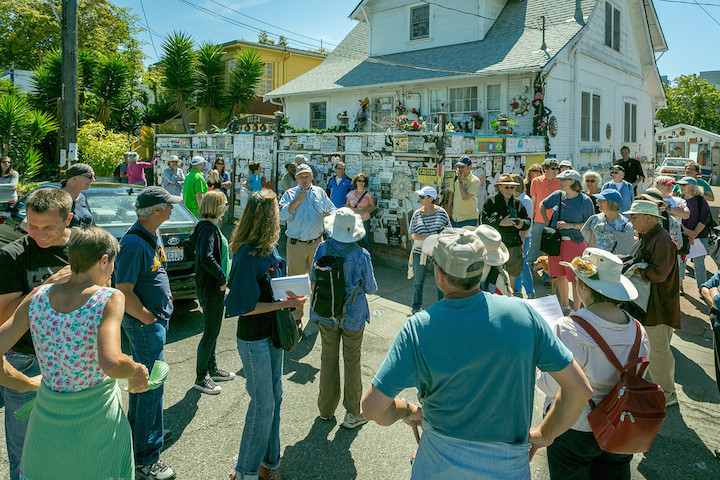 At this point in the walk we engaged in participatory democracy.  I presented two choices to the group – turn around and walk back up or continue east to what I termed a “dark satanic mill.”   Actually, William Blake coined that term – I just applied it to where I was suggested we go next if the group had energy.  The vote was unanimous and shouted out – “DARK SATANIC MILL!”

We walked west to our destination.  I had been inside the old foundry several times.  The artists with work spaces inside were as friendly and quirky as could be.  I found the old industrial architecture inspiring. 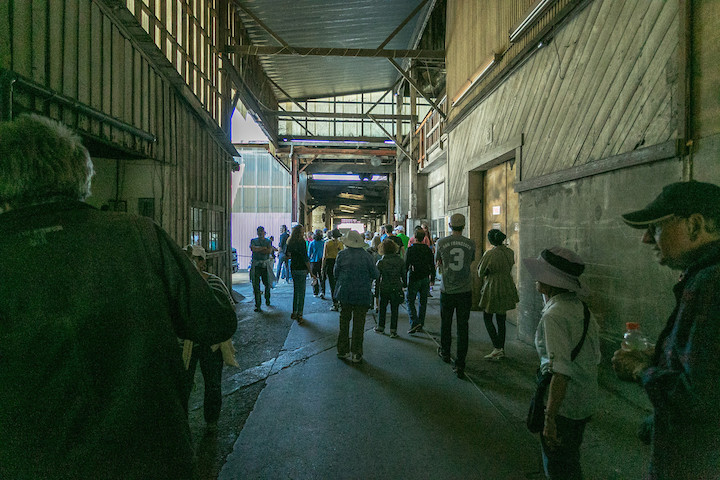 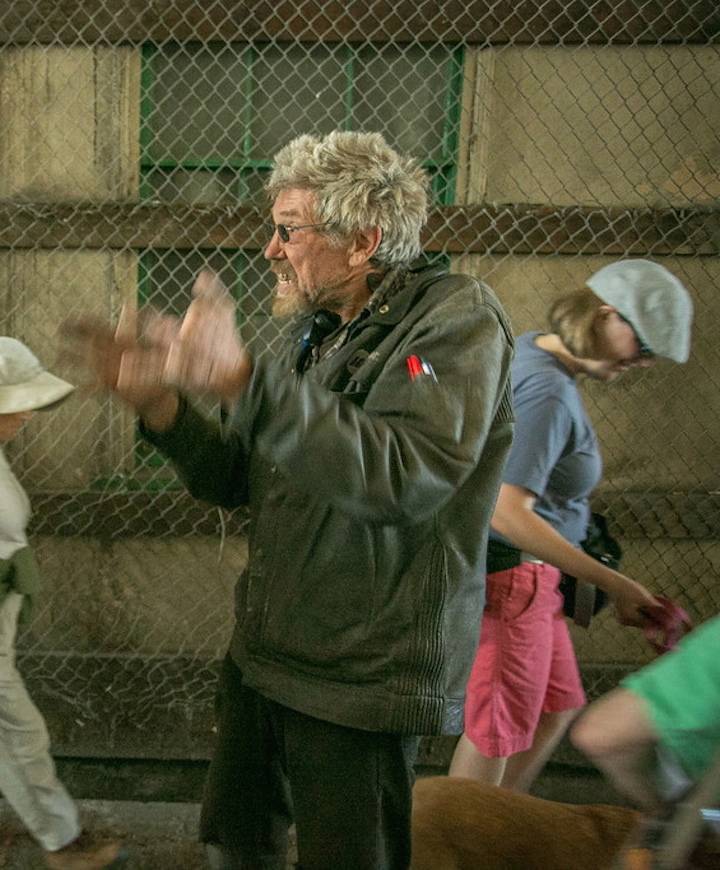 A subject-matter expert emerged from the shadows and started telling me about the abandoned foundries of West Berkeley.  He was very informative. 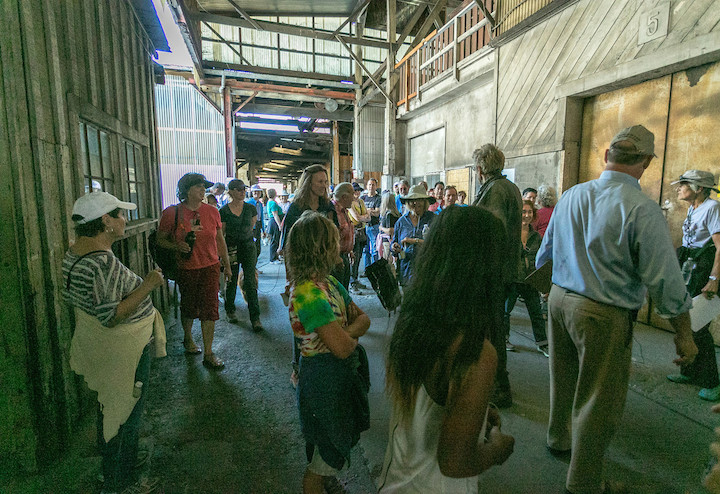 Then from the back of the foundry emerged an angry man.  He demanded that we leave.  He referred to me as a clown.  My daughter Charlotte is in the foreground of this photograph. She was pretty interested in the confrontation.  We all left.  The group was elated. They suspected me of setting up the confrontation.  I did not. 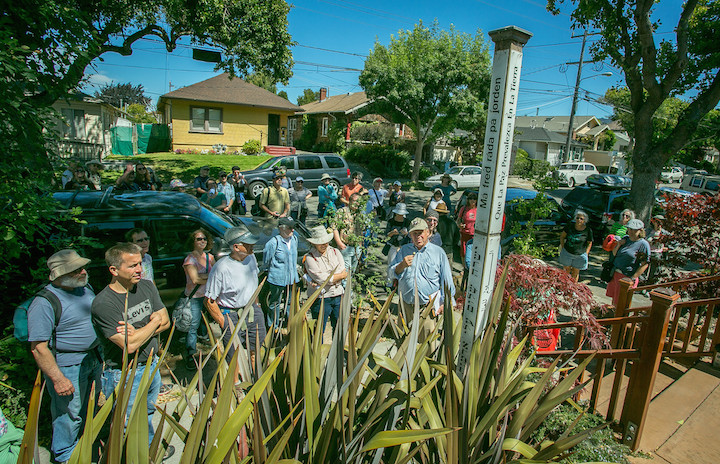 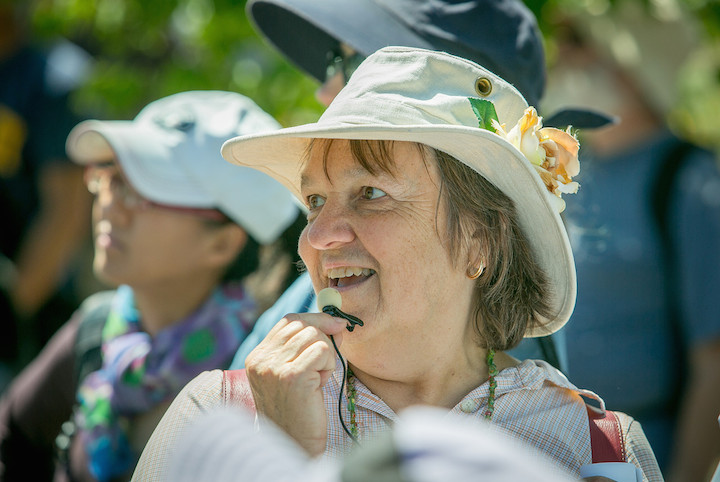 At this point, Kathy Roha who had shown us the bunny topiary had something else to show us. 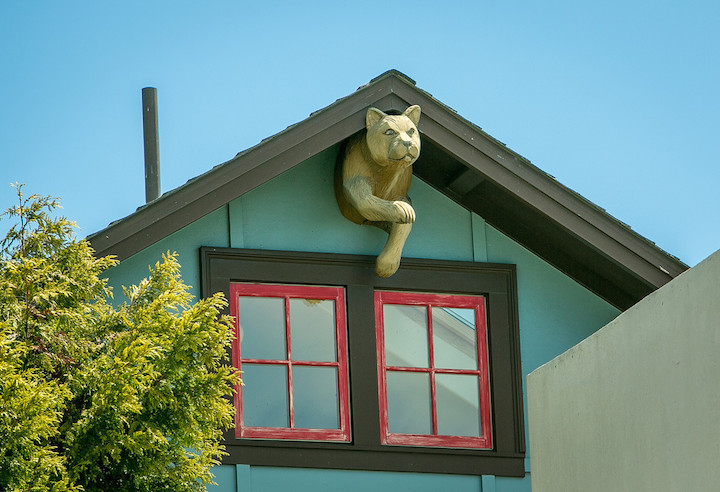 Wow!  I had never noticed this.  It is three stories up and I tend to look for quirk at ground-level. 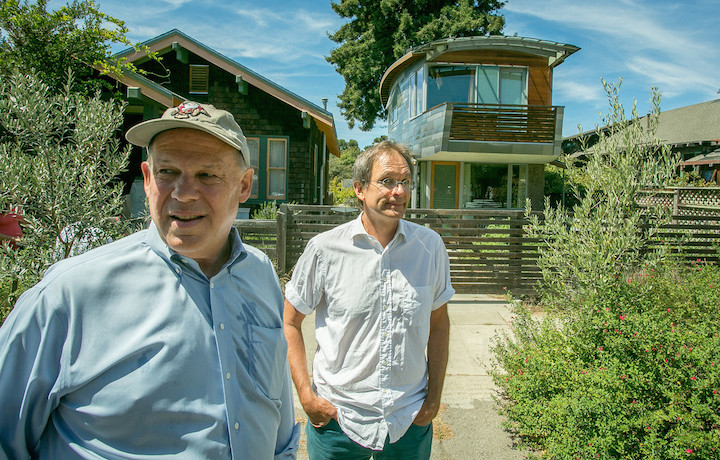 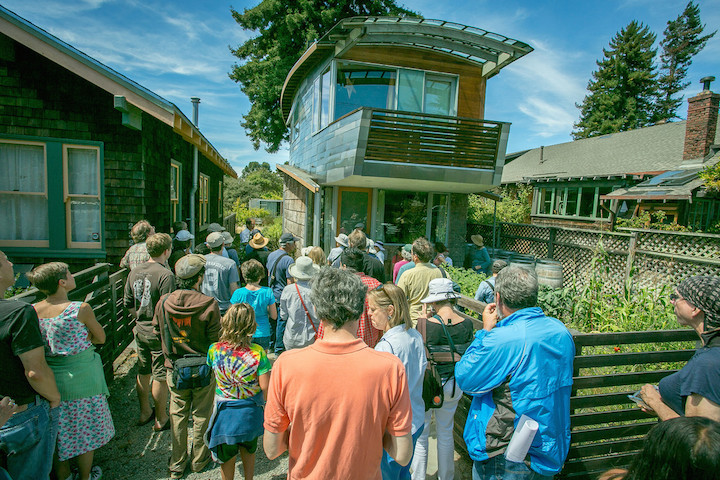 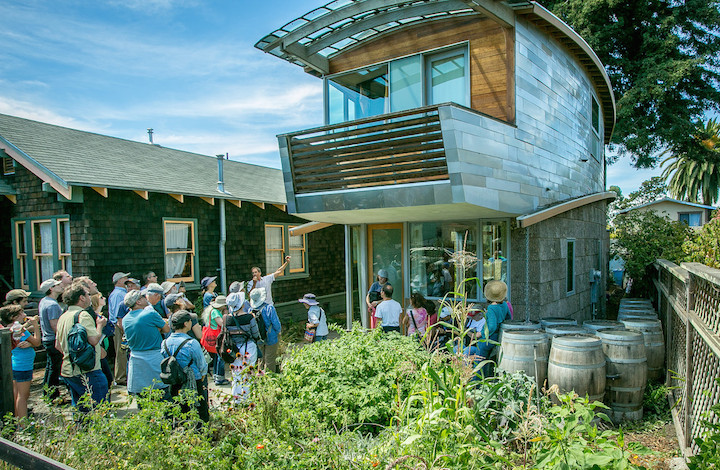 Next stop was on McGee, at the home of architects Karl Wanaselja and Cate Leger.   Karl greet us and gave us a tour.  This was in stark contrast to the lack of hospitality which we had experienced at the foundry.

I blog about this home and the building they designed on Dwight and King – the next and last stop on the tour – here. 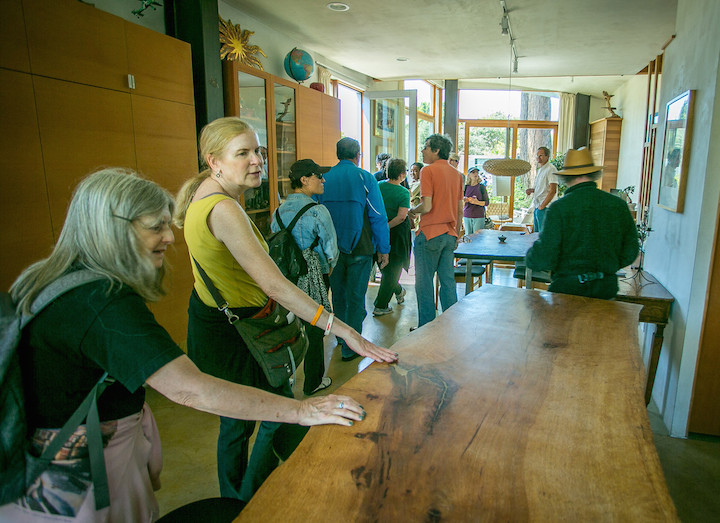 They went so far as to take the 50 of us still walking through their house to the shipping container offices in the backyard. 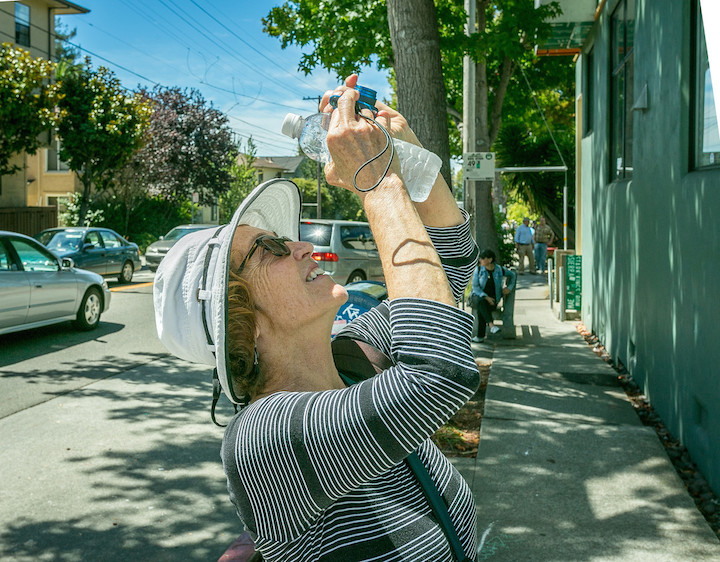 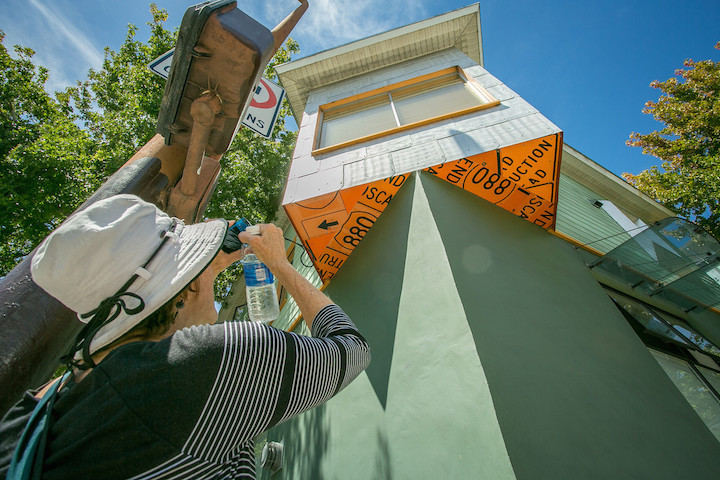 Our final stop was the aforementioned multi-use building at King and Dwight.  It, like most of what we saw, is very photogenic.

It was a warm day.  We still had 40 people walking at the end – amazing!  It was a great first big walk.