In the beginning of Quirky Berkeley, I was not sure if I would include graffiti.  After a few months, it was clear.  Graffiti is material culture.  It may be ephemeral, it may be invasive, but it is there.  We aren’t the graffiti capital of the world, but what we have adds to the mix. 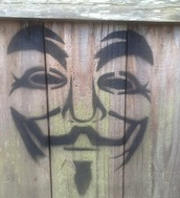 From Anonymous/Guy Fawkes shown here to Banksy tributes to Mr. Pants squid not the sidewalk to Dick Cheney and Ronald Reagan and Sarah Palin on walls – the stencil graffiti of Berkeley.

Graffiti along the railroad tracks

The vestigial industrial Berkeley lining the Union Pacific tracks is a graffiti canvas.  Near Addison and near Gilman graffiti reigns.  It is private property.  Trains come by fast.  It is a dangerous place.  Don’t go. Look at these photos.