These are called “Provincial Realism” or “Mother Goose Houses” or “Storybook Houses” or my favorite, Hansel and Gretel houses.  They charm. They are quirky.

Googie is shorthand for coffee shop moderne, the rage of the 1950s.  We don’t have a lot, and what I call Googie might be nothing more than debased modernism, but it is here and quirky..

I expected to find a fair number of domes in Berkeley.  I didn’t.  So I settled for buildings not reliant on right angles.  Just not right!

Karl Wanaselja and Cate Leger designed a masterpiece of quirk at Dwight and King Way.  Their home on McGree is also a testament to whimsy.

The Tsui Fish House on Mathews

In actuality it is not a fish house, it is a tardigrade, a small, water-dwelling, segmented animal.  Fish or not, the quirk gun is set on stun here. 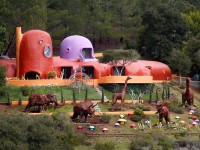 A rule-breaking visit to Hillsborough to see what is new with the “Flintstone House.”  Son of Berkeley Eugene Tssui has been hired to do work on a quirkier-by-the-day  house in Hillsborough.

It was built in the 1920s, evoking the character of European villages as experienced by Americans fighting in the Great War.  Construction continued until the 1950s.  It is magical. 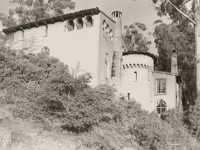 After a discussion of Coleridge’s willful suspension of disbelief, I present three castles from our Berkeley, as well as two from other Berkeleys.  With disbelief suspended, these are splendid, quirky Berkeley castles. 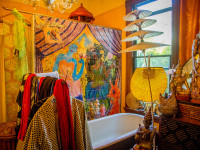 For the first post of 2016, I ignore the cardinal rule of Quirky Berkeley and go inside houses.  Inspirational bathrooms for the DIY crowd. 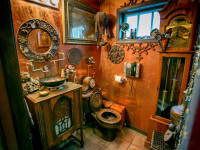 The Quirky Berkeley year is winding down.  Here for your admiration and – I hope – emulation – is another batch of quirky bathrooms.  Be inspired! What’s meant to be will always find a way. 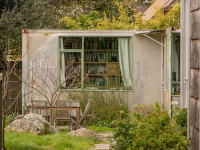 After an explanation of the calculations that go into the total quirk rating, an exploration of the use of shipping containers in Berkeley’s yards – thanks to a tip about one on 5th street that made enough to post. 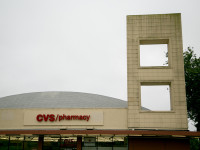 Raymond Loew – a great industrial designer – created the tower design for Lucky’s.  This two-square Loew tower is at the Shattuck and Rose CVS, a former Lucky’s. Squares to the sky! 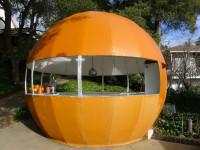 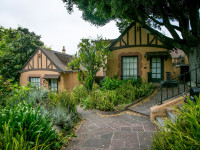 I find bungalow courts to be inherently quirky.  I realize that not all would agree.  Here are some – not all – some of Berkeley’s fine class of bungalow courts. 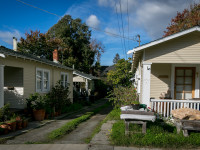 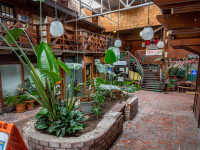 The early 1970s indoor mall at Telegraph and Blake is a magical time capsule, encapsulating a Berkeley that is slipping away.  It’s facing the wrecking ball.  Can’t we do better? 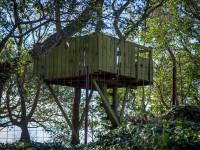 A sampling of Berkeley’s tree houses, markers of childhood and innocence.  They evoke.  They make me smile. 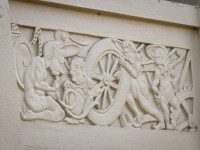 A posting on relief sculpture in Berkeley. Some of it is on its face quirky.  All of it is an intrinsically quirky part of our fabric. 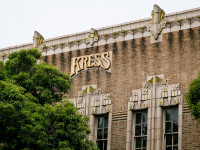 Join the flaneur as he walks six blocks south from University on Shattuck, documenting  relief sculpture and facades, beauty for the sake of beauty. 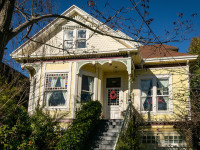 Back to Old School Quirky Berkeley – the third and not final installment in photographs of houses with polychrome decoration that embellishes or enhances architectural details. 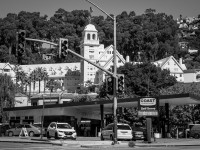 We got out the black and white camera for a tour of Berkeley gas stations, old and former.  Example – this almost-Googie Coast Gas station in the shadow of the Claremont.  Going, going, gone.