This walk was not a typical Path Wanderers walk – very urban, no paths – and it represented something of a mission creep for Quirky Berkeley.  My focus is quirky material culture in yards and on houses, but I submit that it is humanly impossible to say “Quirky” and “Berkeley” and not visit Telegraph Avenue.  I led this walk with Ted Friedman, Telegraph Avenue Scholar and Fixture.  He wrote about the walk here. 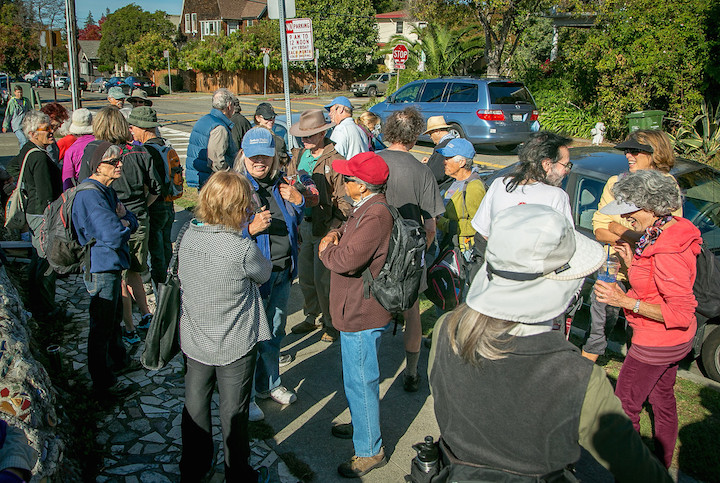 We met at Willard Park, known once and occasionally still as Ho Chi Minh Park, at the Berkeley Potter’s Wall bench by Andrew Werby (1978).

To set the tone for the walk and to explain my approach to Telegraph Avenue, I read from John Steinbeck’s prologue to Cannery Row:

Cannery Row in Monterey in California is a poem, a stink, a grating noise, a quality of light, a tone, a habit, a nostalgia, a dream. Cannery Row is the gathered and scattered, tin and iron and rust and splintered wood, chipped pavement and weedy lots and junk heaps, sardine canneries of corrugated iron, honky-tonks, restaurants and whore-houses, and little crowded groceries, and laboratories and flop-houses. Its inhabitants are, as the man once said, “whores, pimps, gamblers, and sons of bitches,” by which he meant Everybody. Had the man looked through another peep-hole he might have said: “Saints and angels and martyrs and holy men,” and he would have meant the same thing. 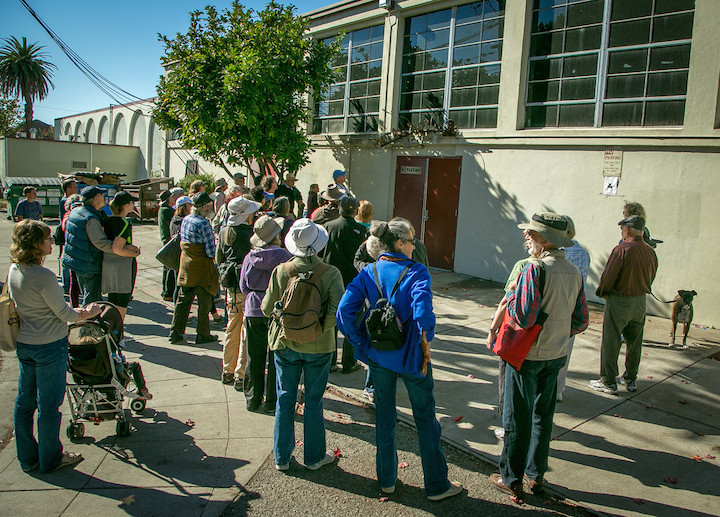 After admiring the bench and talking about Ho Chi Minh Park, emphasis on the pro-SLA rally held there on June 2, 1974, in which Kathleen Soliah openly declared her support for the SLA, we walked south to the back of Willard School and the Metal Shop Theater.  The sign over the door is the work of Mark Bulwinkle, and it is widely known that I worship at the altar of Mark Bulwinkle art. 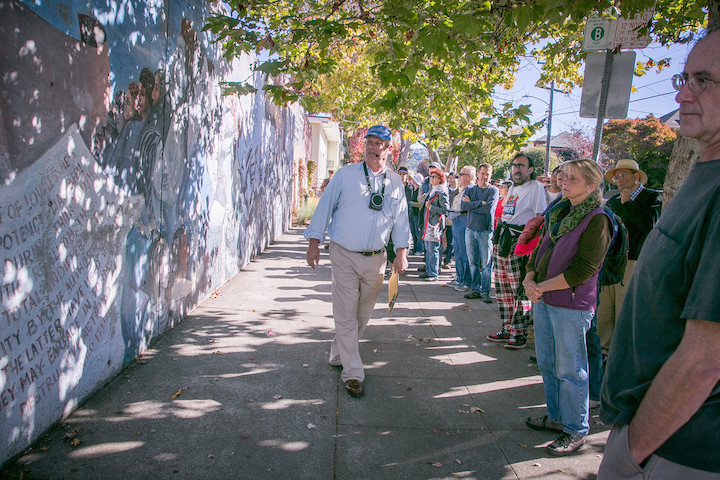 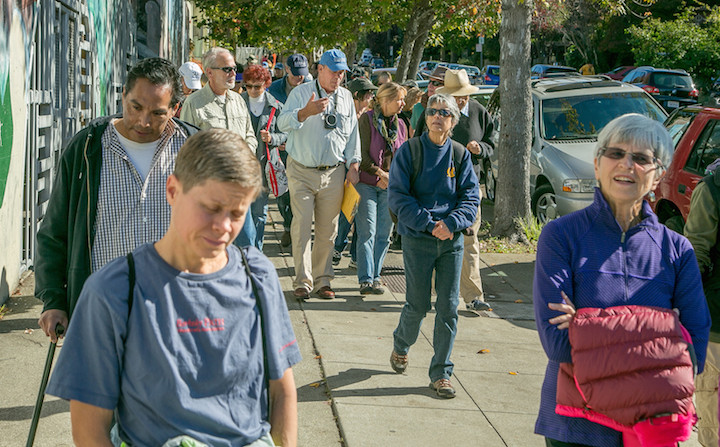 We walked south to Stuart and then turned right.  We admired the 1987 mural by Malaquias Montoya that depicts heroic, multicultural figures in struggle and a dystopian vision of American, Soviet, and British robot dogs. 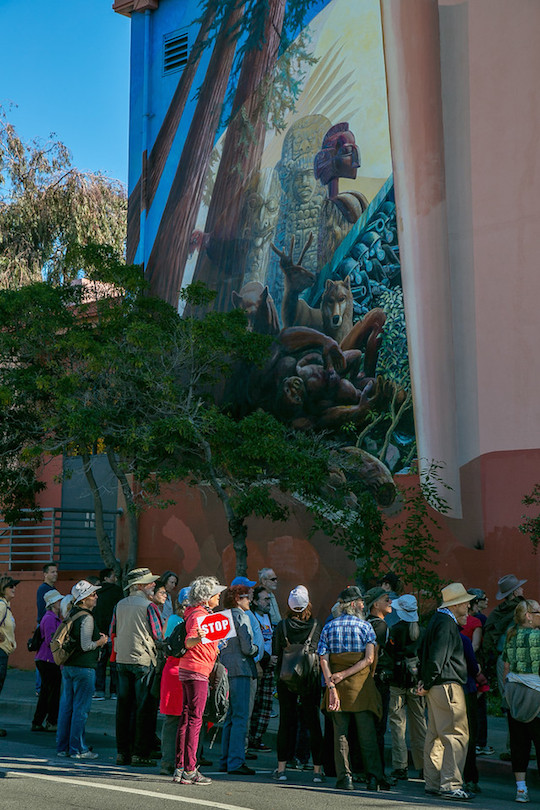 We walked down to Telegraph and started north.  We admired the remnants of Osha Neumann and David Galvez’s beautiful huge mural on the front wall of Willard, much of which was painted over by the BUSD. By mistake they say. 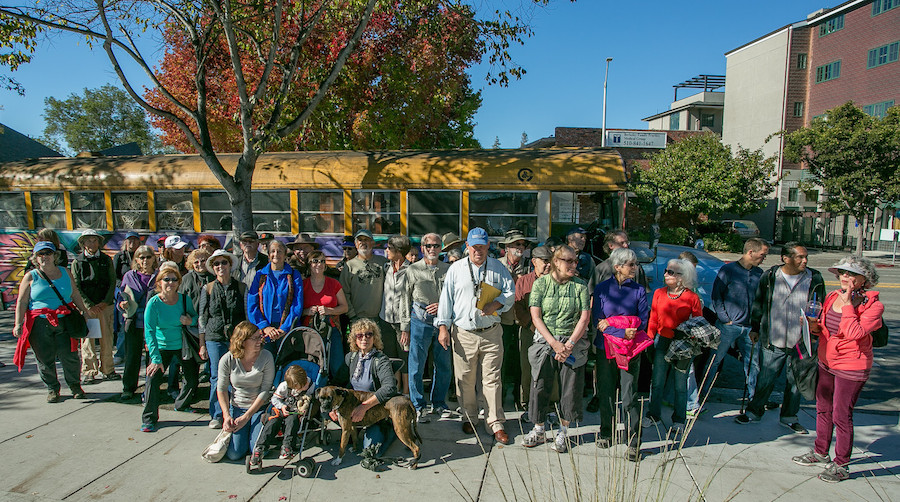 Photo Op!  This is most but not all of the group.  Traveling Bob got out of his bus to pose in the picture with us. 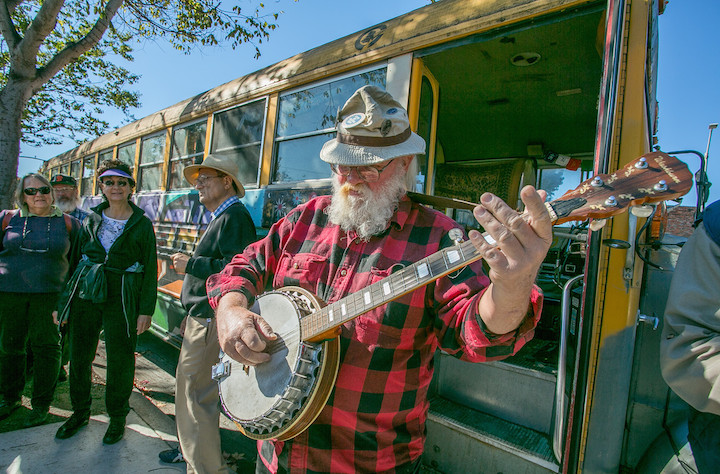 He is a banjo busker.  He played for us! 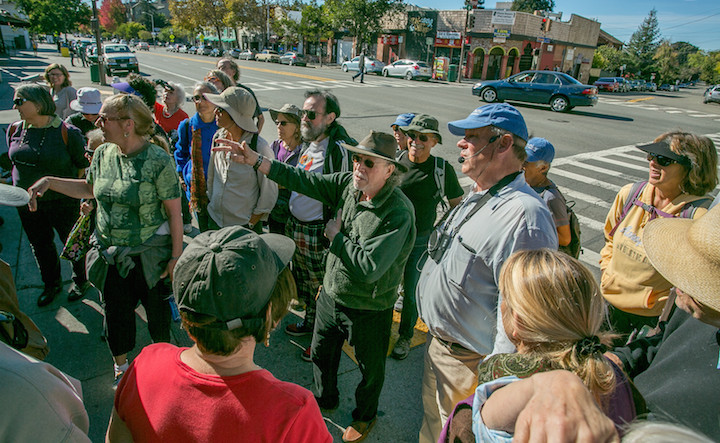 At the Center for Independent Living Ted talked about the labyrinth in the courtyard as well as the Telegraph Repertory Cinema. 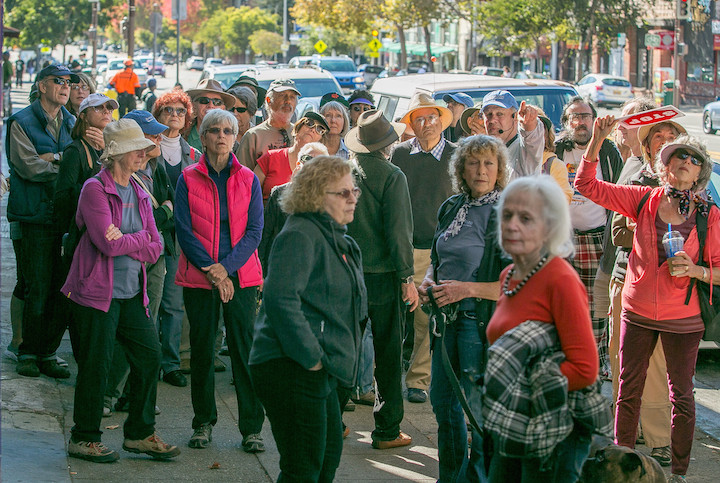 I pointed to the roof where James Rector was standing when he was shot and killed during the People’s Park demonstrations in 1969.  At the time the store was Granma, a Trotskyist bookstore. 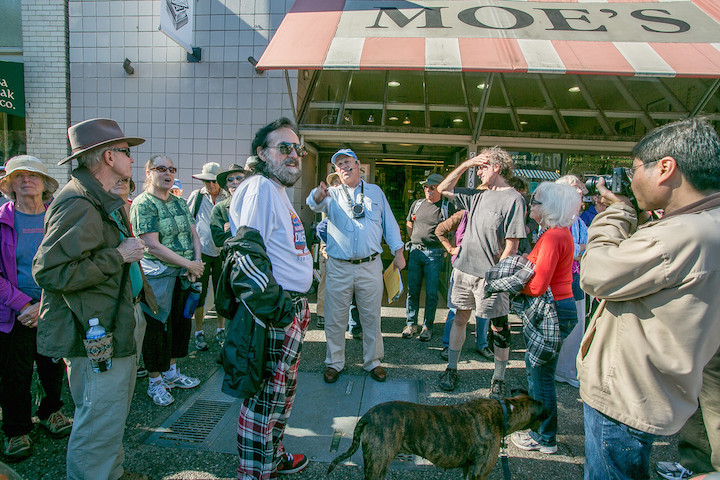 We stopped in front of Moe’s and talked about Moe’s migrations, Cody’s migrations, the Cafe Med, and the progression of Lucky’s to Espresso Forum to One World Family to Villa Hermosa to Amoeba Records.  We briefly talked about the Berkeley Inn, also known as the Heroin Hotel.  It is long gone. 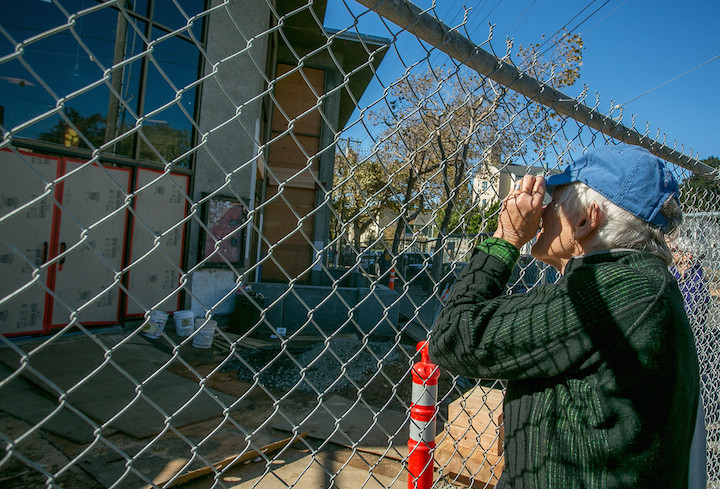 We tried to peek inside the old Cody’s building that is soon to be the Mad Monks Anachronistic Media Center, with art by Mark Bullwinkle. We couldn’t really see. 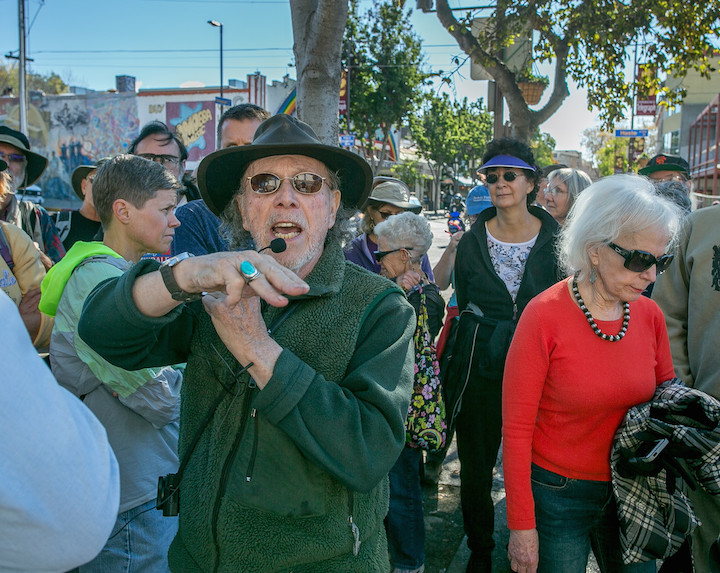 Ted told us the history of the movie theatre that now has the Rasputin sign on it.  He knows about all the movie theaters along and near Telegraph – five of them, all closed. 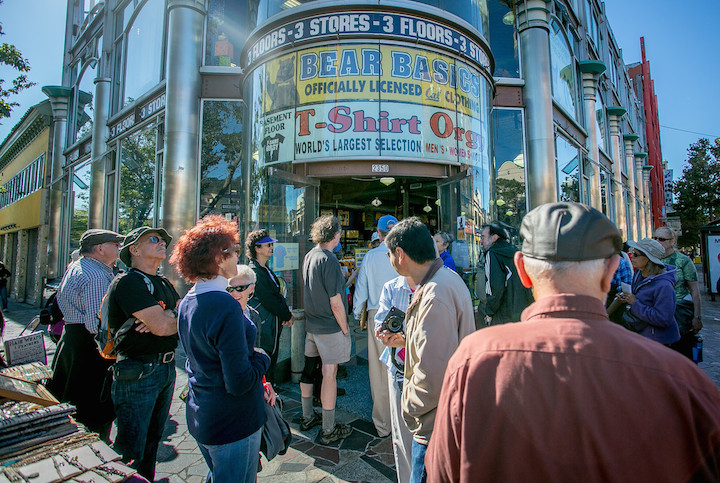 At Durant, I sent the group into Bear Basics to admire the many sculptures by Mark Bullwinkle, commissioned when the store was the original Rasputin’s. 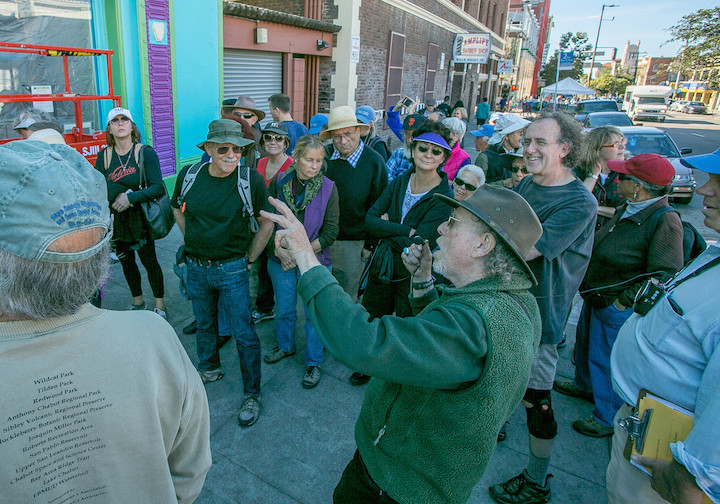 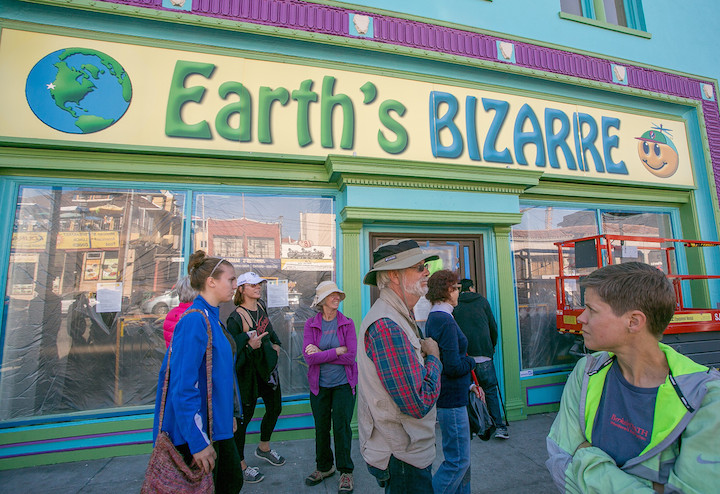 We walked up Durant to see another old movie theater.  Ted promised us that when it opens back up, the interior will blow our minds. 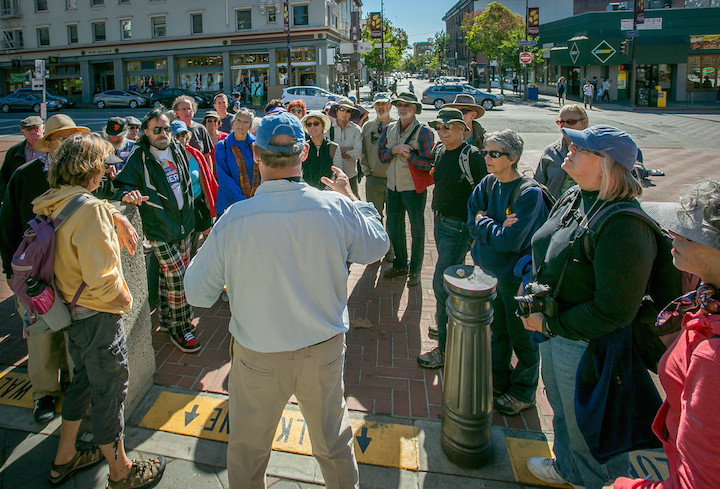 We stopped at the entrance to Sproul Plaza.  I talked about Mario Savio and Holy Hubert and the Moon Man and Ludwig the dog. 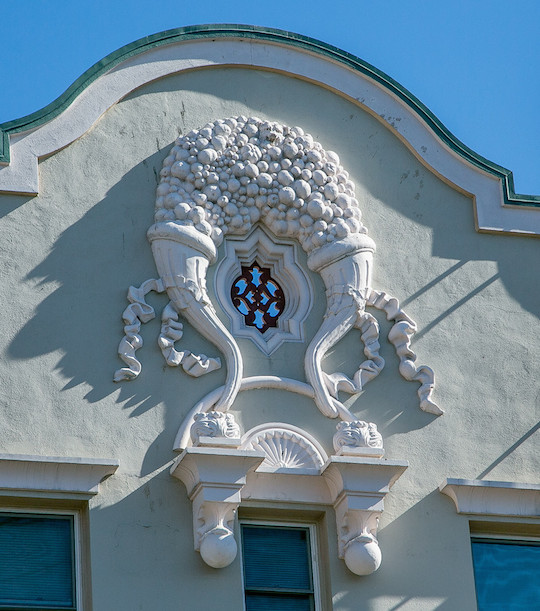 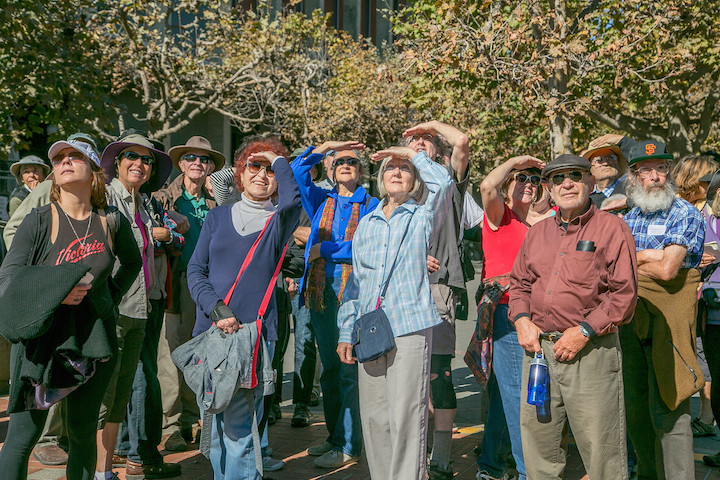 One of the walkers pointed out the refurbished Granada Building on the southeast corner of Bancroft and Telegraph.  We looked up and saw the little bears in the ornamentation 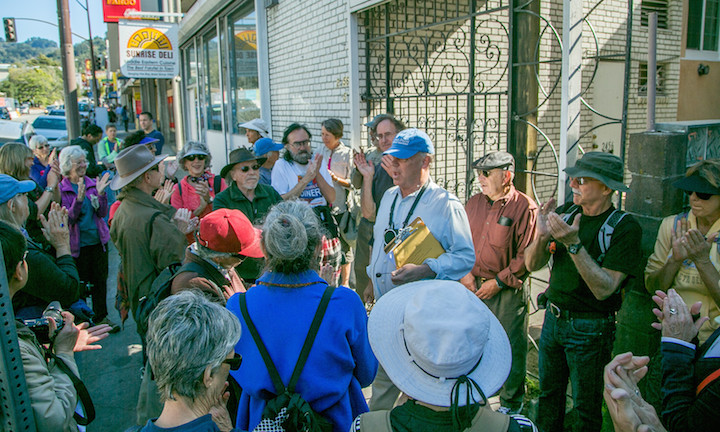 We finished at 2440 Bancroft.  Ted showed us the fifth and final closed theater, and on the roof showed us the fly rig that is still there, that lifted the screen.  We ended the walk and we all clapped for each other.

The following Saturday, November 1, 2014, Linda Rosen and I led a walk along Telegraph for the Berkeley Historical Society.  We started at Sather Gate and ended at People’s Park.   It was the day that the Wooley house was moved from Haste to Dwight.

I have two photos from the walk: 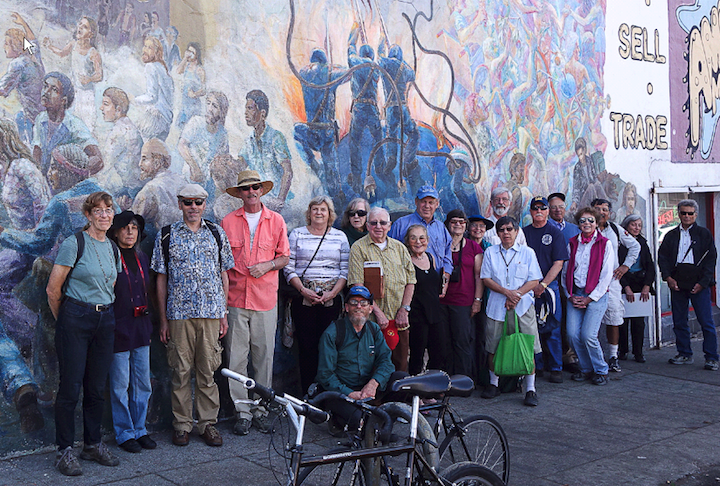 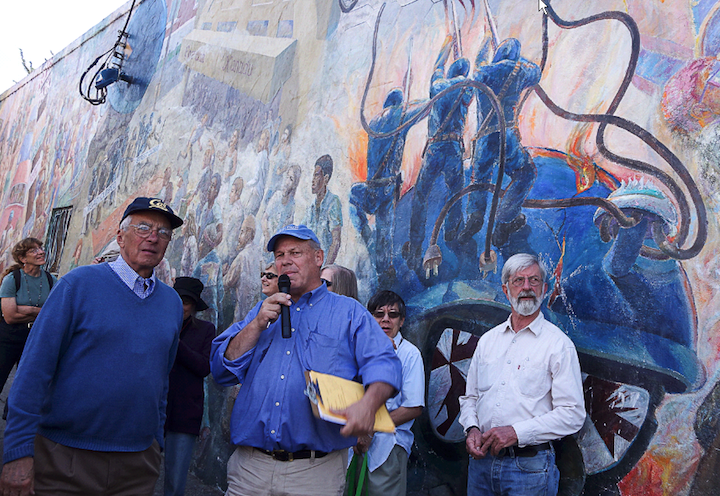 There was stirring and informed audience participation and contribution.  The focus was on the Free Speech Movement, opposition to the Vietnam War, and People’s Park – the political Telegraph.