When John Storey first saw Normandy Village, he said, as if by reflex, “Carmel.”  He has done enough for Quirky Berkeley to earn the right to an opinion, but – that said – Carmel?   Seriously?

He says he means nothing bad with the comparison, that he is just commenting as a photojournalist.  I am overjoyed at his comparison for an ulterior reason that he is only learning here.  Berkeley is not mentioned in many songs.  One of the not many in which it is mentioned is Simon and Garfunkel’s “Cloudy,” with the line (at 1:09) –  “My thoughts are scattered and they’re cloudy / They have no borders, no boundaries/ They echo and they swell/ From Tolstoy to Tinker Bell/ Down from Berkeley to Carmel.”  How perfect is that?????

And so that is the silver lining inside a cruel comparison.

Normandy Village, aka Thornburg Village, is a cluster of apartments, some of which have been converted to condos, on the first block north of campus on Spruce Street.  It was built in the 1920s, evoking the character of European villages as experienced by Americans fighting in the Great War.  Here is a good historical description of the project by Daniella Thompson – who is the best that there is – from its inception the 1920s through the final additions in 1955.

To me, it has always been magically quirky, and quirkily magical.  Especially on a foggy or misty evening or night, or during the magic hour, the final light before sundown. Maybe I am a sucker, but I find it quirky, in an old weird America kind of way.  I don’t see it and think – oh, I’m in Normandy, or oh, I’m in the Paris Hotel in Las Vegas (joke!).  I see it and think – oh, I’m in Berkeley just before the bank crash and Great Depression, when things were happily different.

Enough, words – here are pictures (made by John Storey of Carmel comparison fame). He is a great photographer and it is very photogenic: 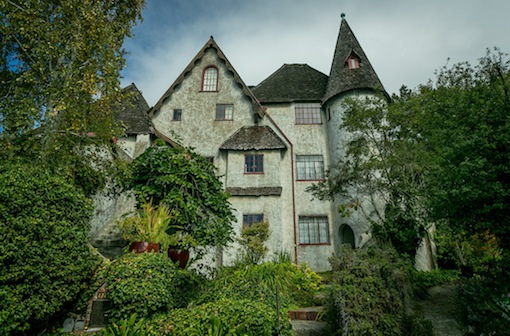 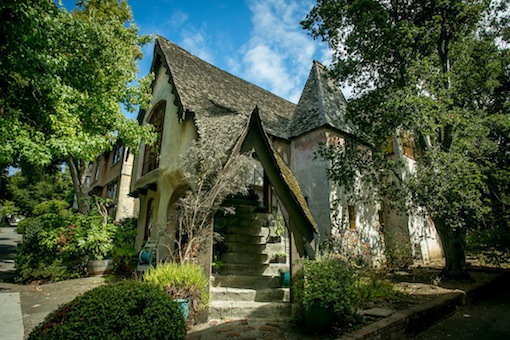 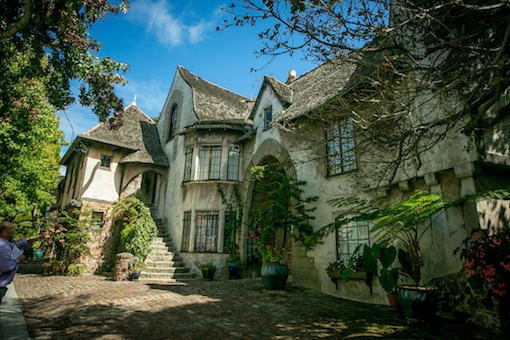 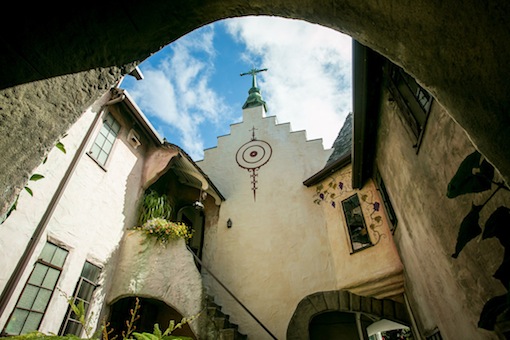 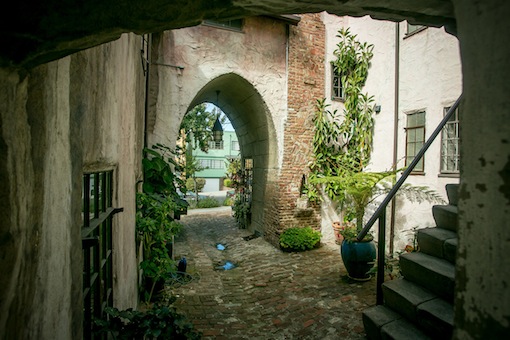 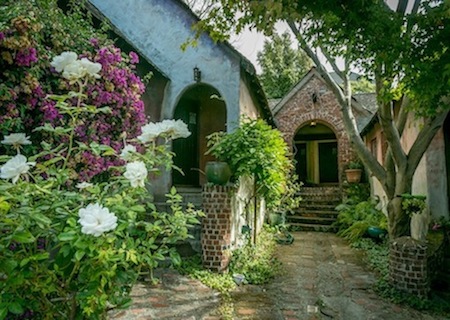 Fading but there, some refreshed some not, coats of arms, painted flourishes: 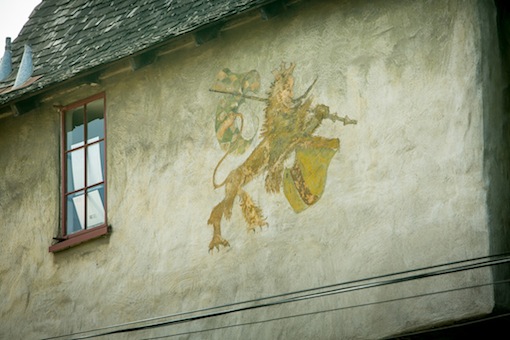 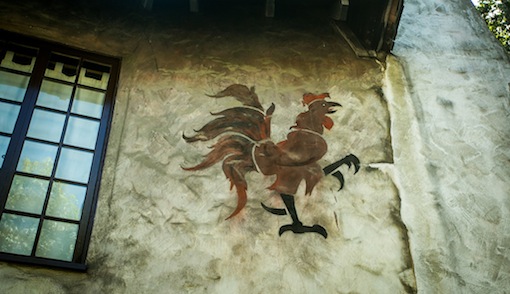 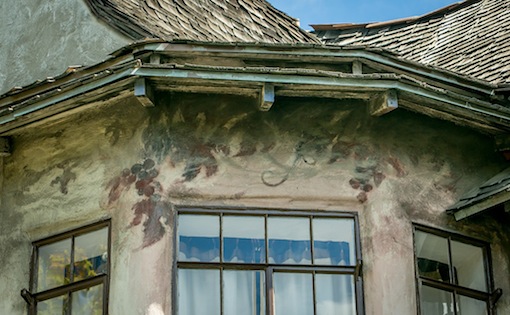 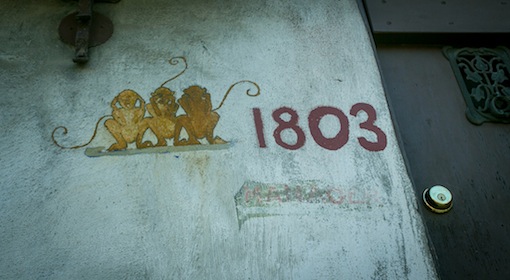 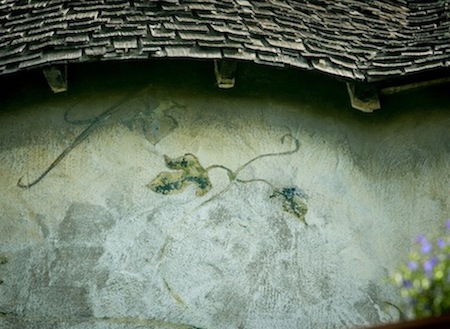 Paul Simon sang to us about angels in the architecture.  The point is – when you look up and down and all around, you see things that you miss every day.  Like these details at Normandy Village: 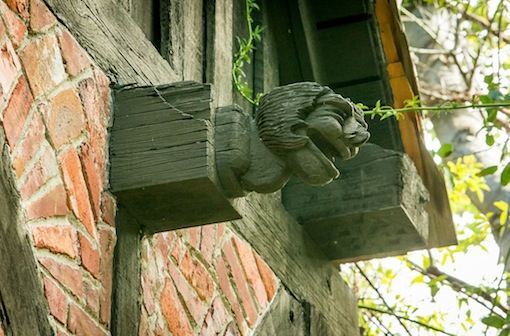 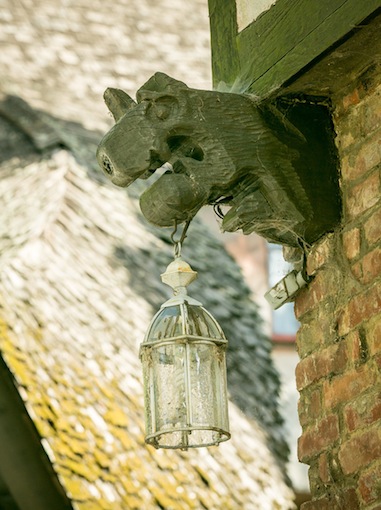 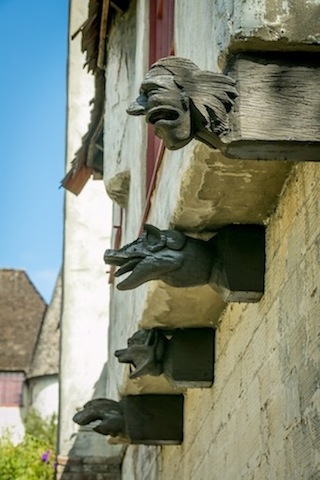 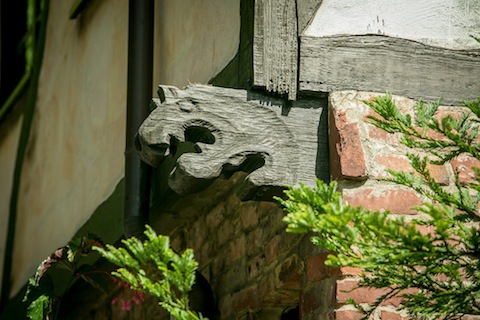 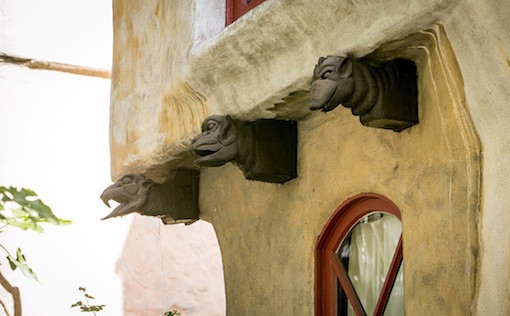 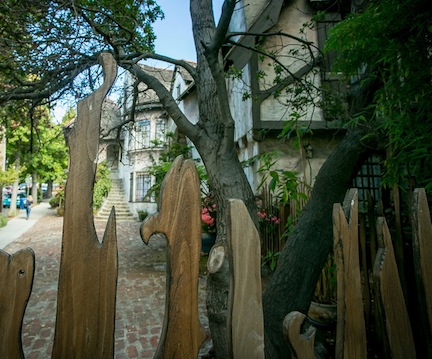 And a couple of tiles.  I didn’t see others, but there may be: 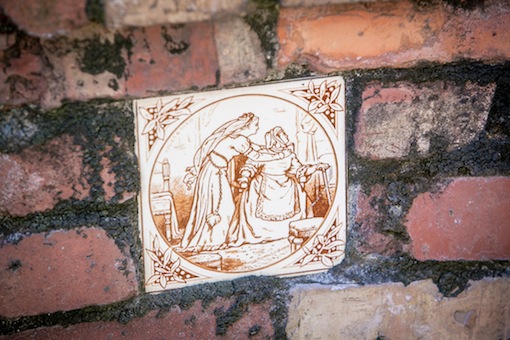 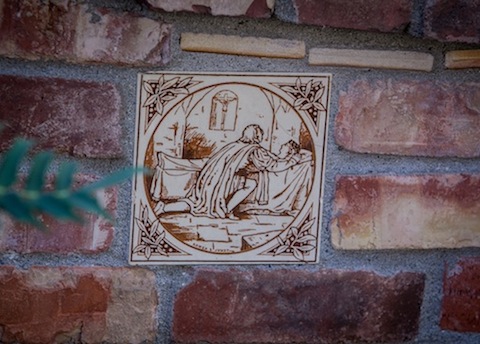 And a special door for little people who live under the building.  Check out the carved hinge strap: 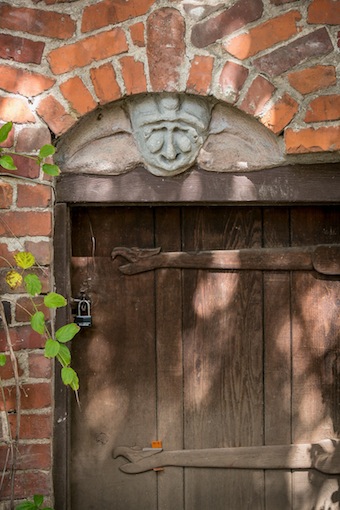 Julius Shulman was an architectural photographer best known for his photos of mid-century modern houses. 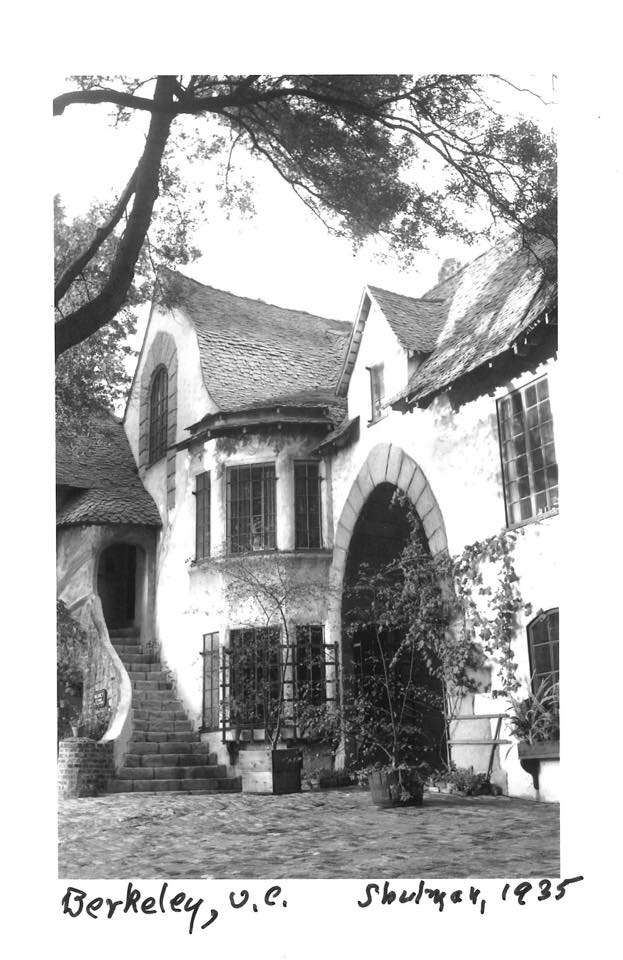 He made this photo of Normandy Village in 1935.  Exquisite.

When I showed my friend these photos, he giggled.  He has a Very Specific memory of Normandy Village in 1971, as specific as the circumstances permit.  He has a strong association with one particular apartment there and Elton John’s  “Tiny Dancer.”

He sees the window of the apartment in one of the photos, and says:

P.S.  About Carmel: I bristled at the comparison but owe Carmel more than my bristling.  I have good memories of visits there between 1969 and 1979.  Robinson Jeffers is my favorite poet, and I consider his Tor House in Carmel to be a Sacred Place. 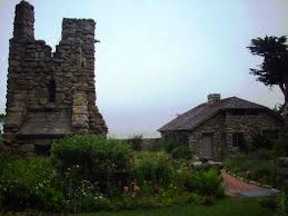 And, to be fair, Carmel does have its share of fairy tale architecture.   So John Storey wasn’t wrong.  It just sounded a little snarky.