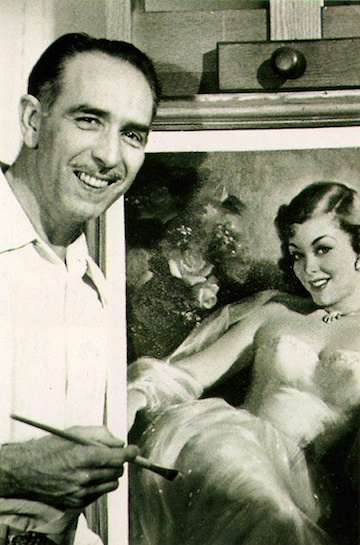 Frahm was a successful, conventional calendar and advertising artist. 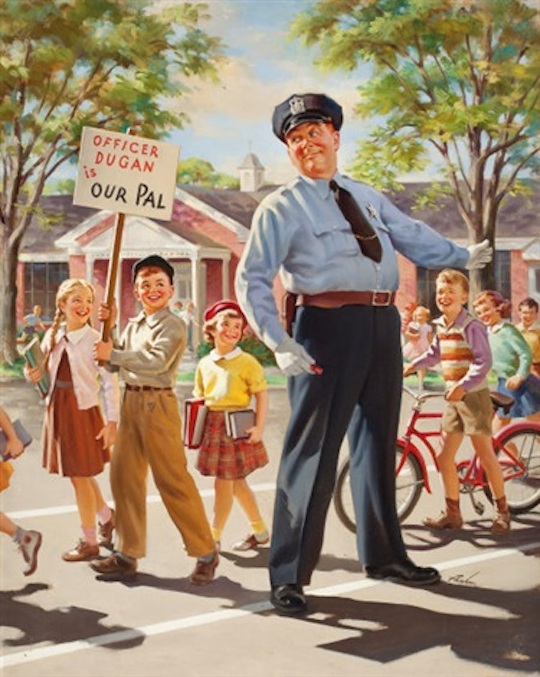 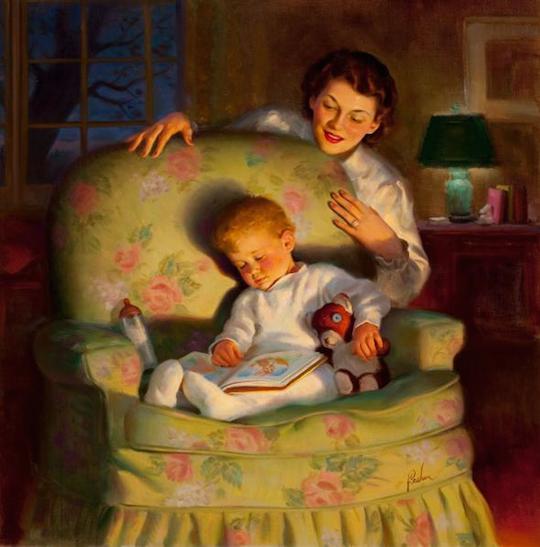 He was as good at innocence and happiness and safety and 1950s serenity as anyone. 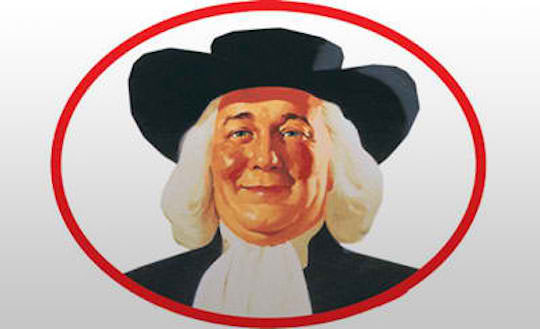 And he had some serious success with logo art, as in the Quaker. 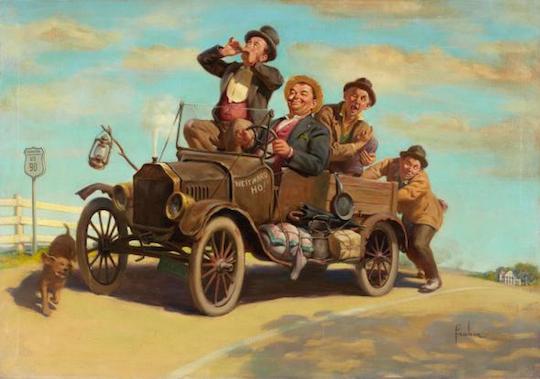 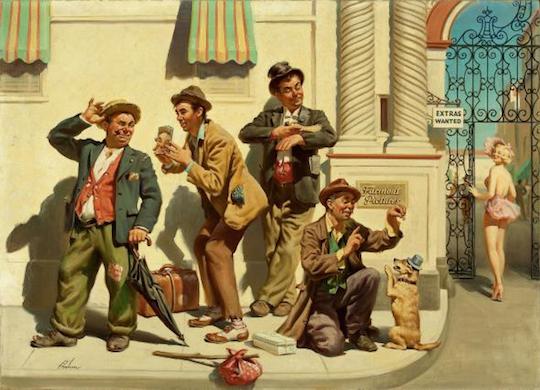 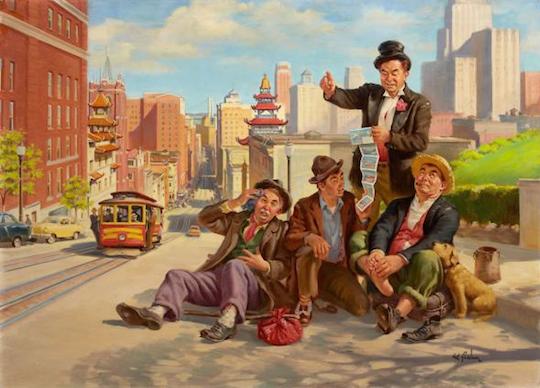 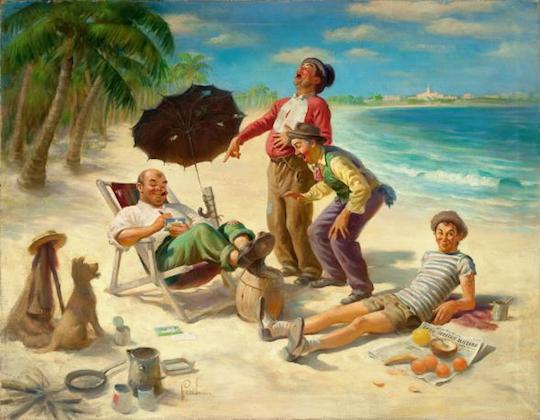 He painted a series of hobo scenes, all very romantic visions of poverty and homelessness.

Frahm took a walk on the walk side with his happy Rockwellesque style in a series of paintings named “Panties Falling Down,” originally found on calendars. An attractive young woman suddenly find her panties fallen to her ankles as she boards a bus, waits to cross the street, or walks past a construction site, the wind in each instance acting in cahoots with the collapsed elastic of the panties to tease the woman’s skirt or dress upward, threatening to show what was not shown in the 1950s. 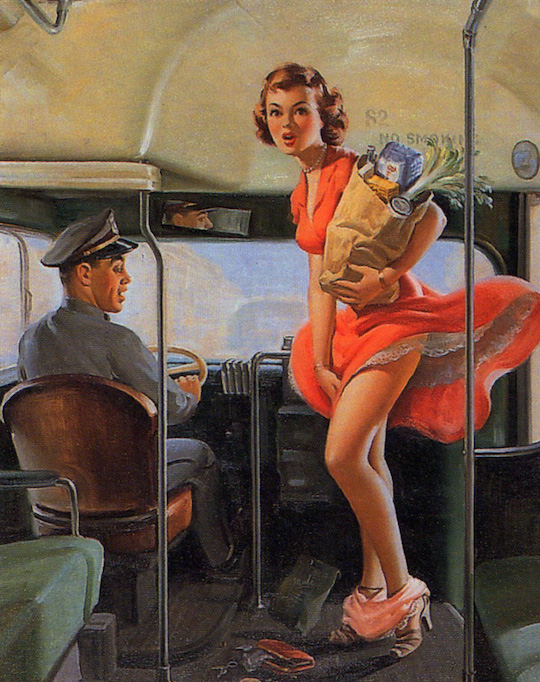 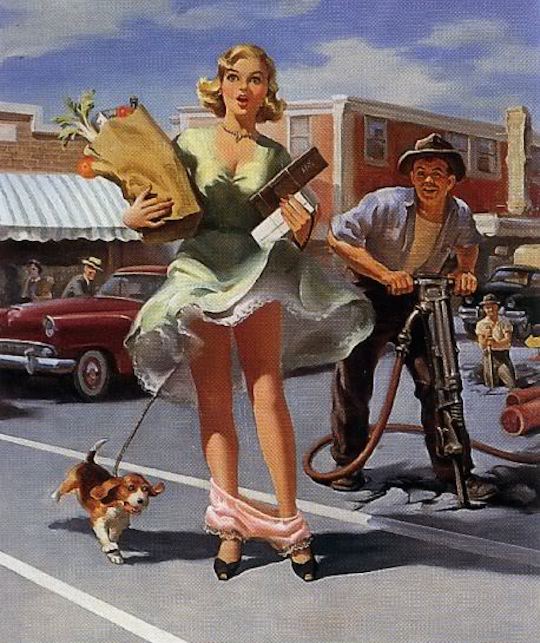 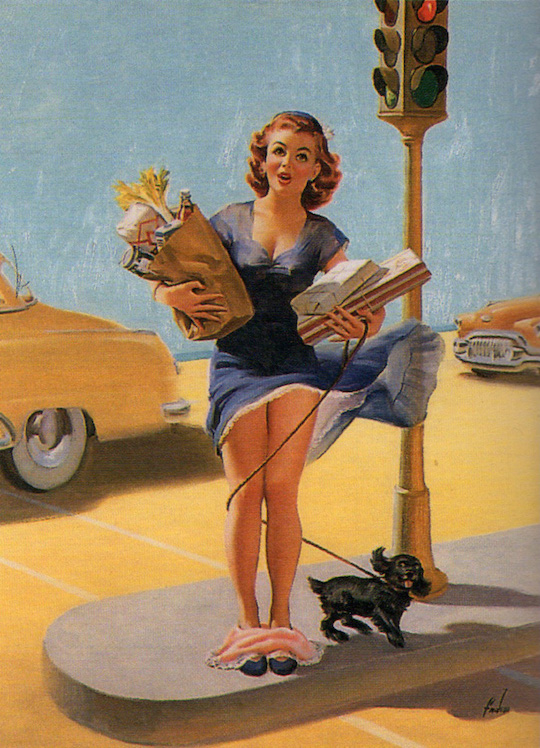 No Time to Go 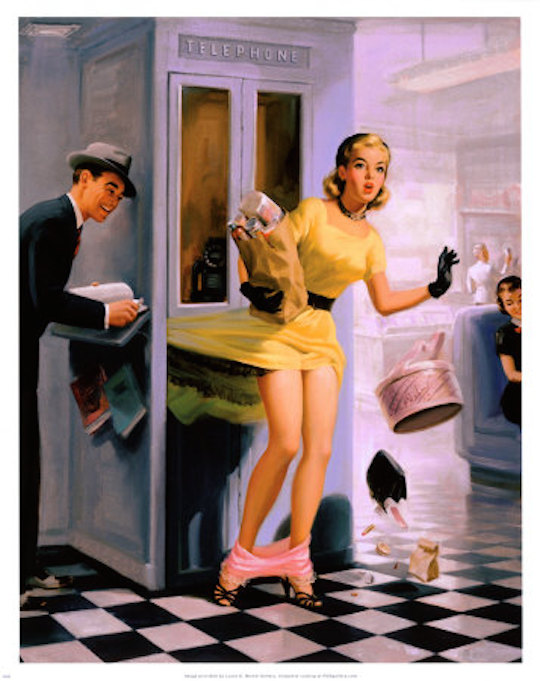 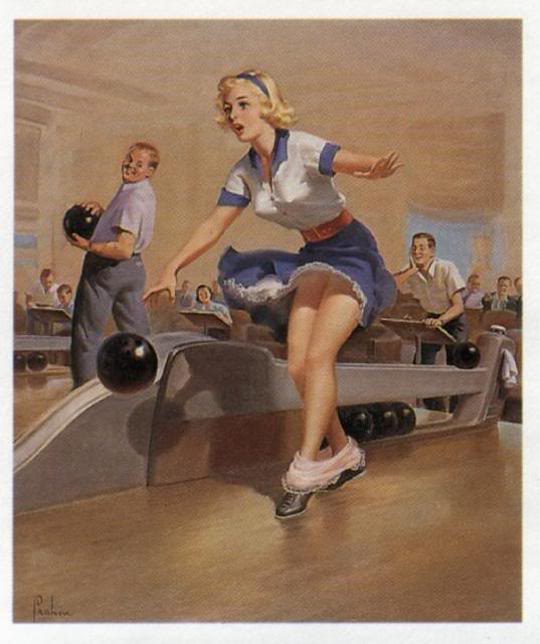 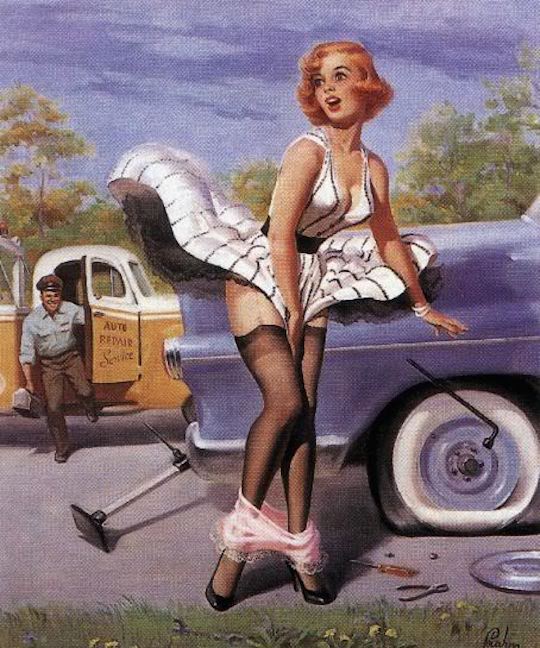 In Need of Help 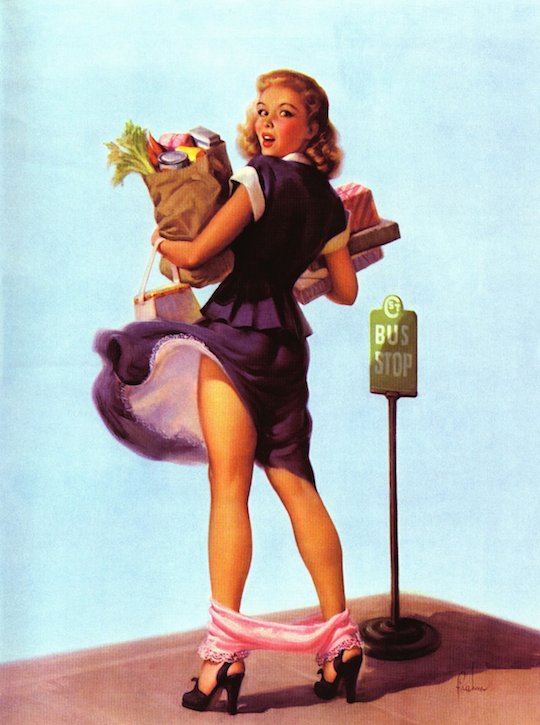 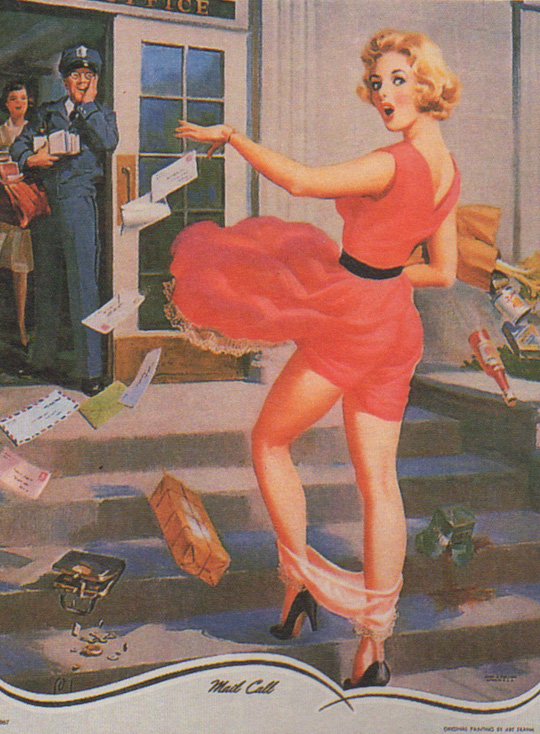 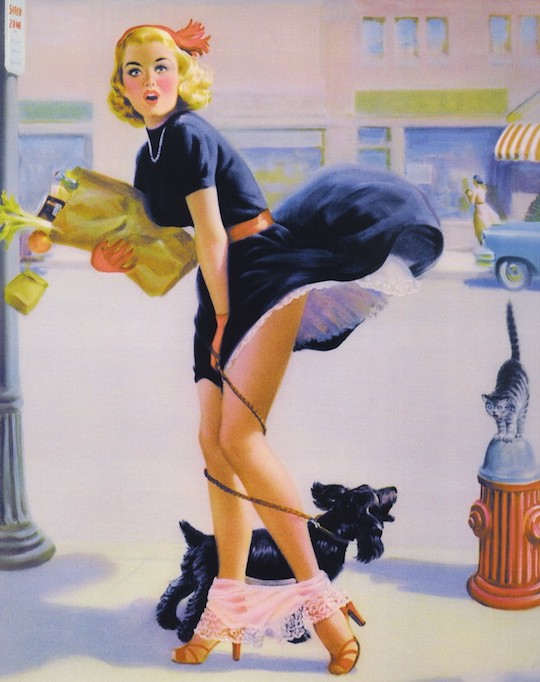 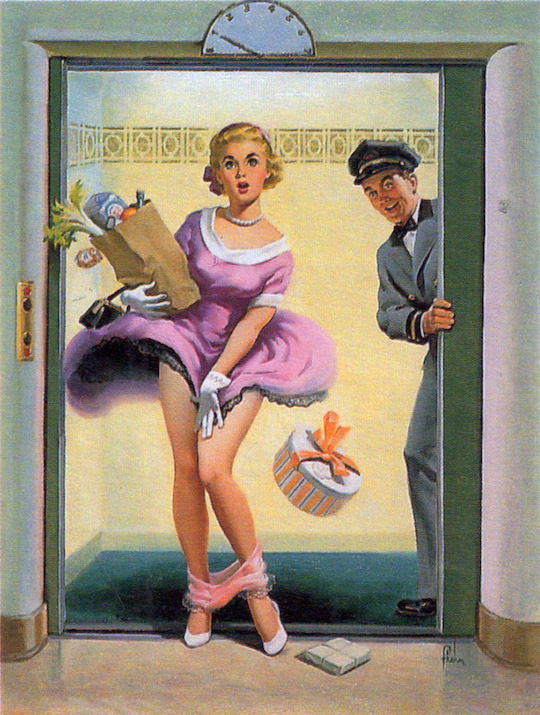 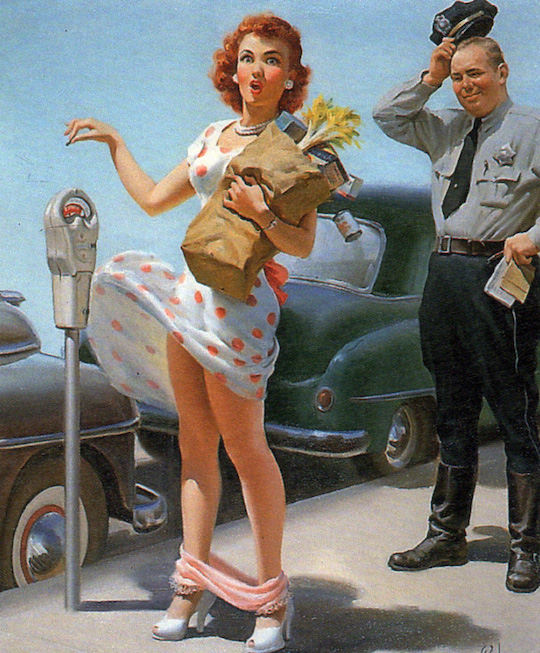 No Time to Lose

In all my years, I have never seen this happen.  Maybe it was there and I missed it.  I don’t think so though.  And I never knew that celery was so popular.

Side note: The falling down of panties was a theme that at least other painter picked up from Frahm,  Jay Scott Pike. 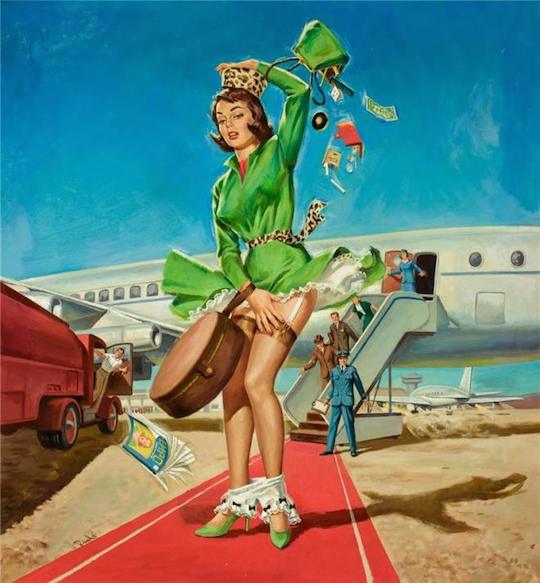 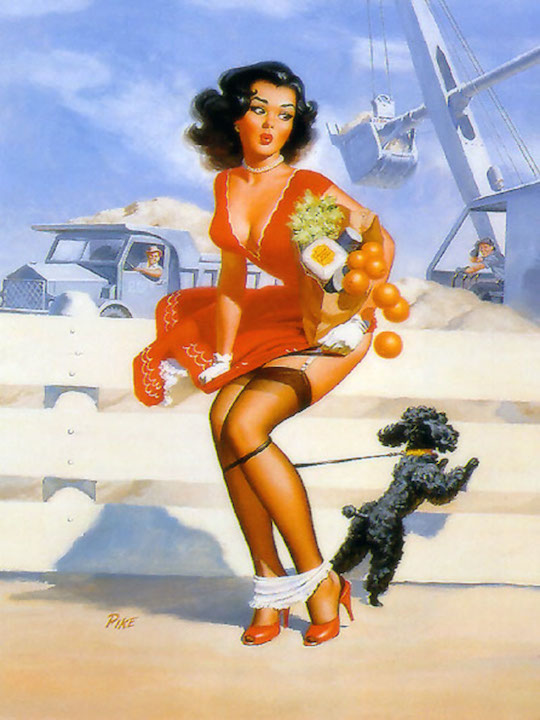 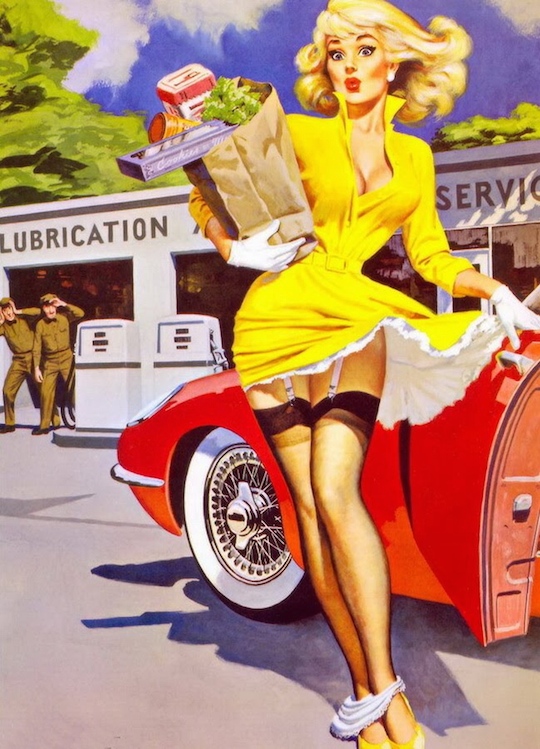 I think that Frahm’s paintings, like the Maidenform ads, suggested – by seeing underwear that we don’t normally see – the possibility of seeing the parts of the body we normally don’t see.  Just a little more breeze and there we would have been.  (But weren’t).

My friend knew that I was working on Art Frahm and mentioned it to Gabby.  Gabby said he’d send us something special and my friend asked that I hold off on this posting until Gabby’s package arrived.  I held off and it was worth it.  This is what Gabby sent: 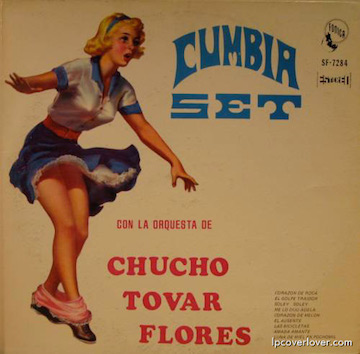 That was worth waiting for.  I asked my friend about the photos.  He said, “That was was some weird stuff in the fifties.  I was 14 when the new Coppertone ads came out. I was no genius but I thought this was a sicko idea.  Just me?” 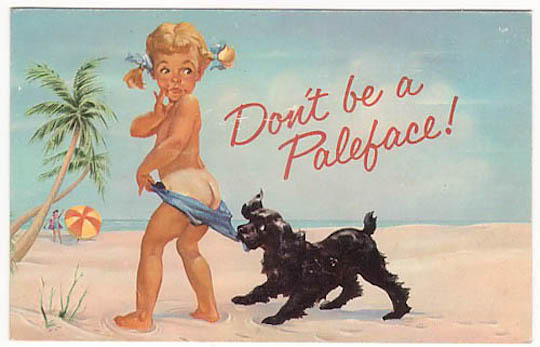 “Do you remember the Coppertone signs?  The mechanical ones, the ones that moved?” 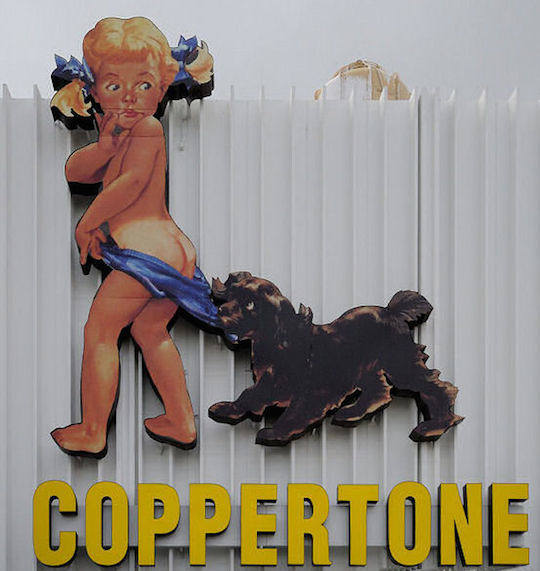 “There is still one in Miami.   Creeped me out then, creeps me out now.”

I agreed.  My friend had a point.  The 1958 Coppertone girl was painted by Joyce Ballantyne. 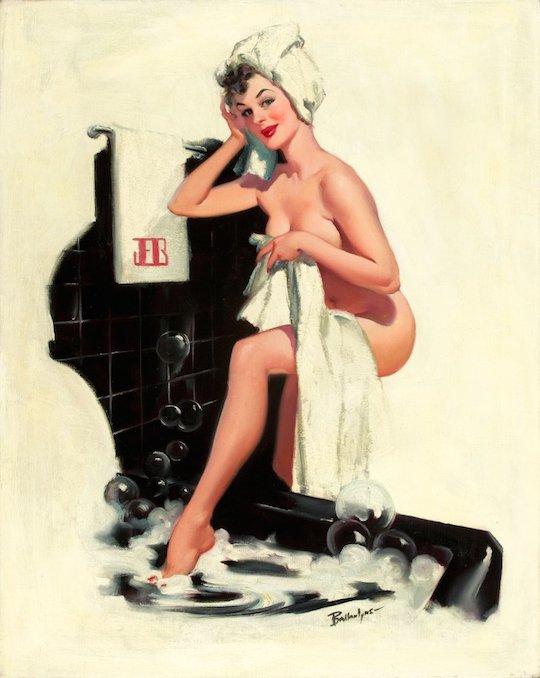 Ballantyne had done a lot of art work in her life, including her fair share of pin-ups.  Are we cynical with our retrograde extrapolation of 21st century sexual attitudes to a simpler and more innocent time, or was there something going on there?  Cute and naughty or fetish?  Is there a difference?  The adult fetish stuff is one thing.  The heart wants what the heart wants.  Not so sure about the Coppertone girl.

Anyway – the thing is – I asked my friend how would he describe Art Frahm’s paintings of panties falling down?