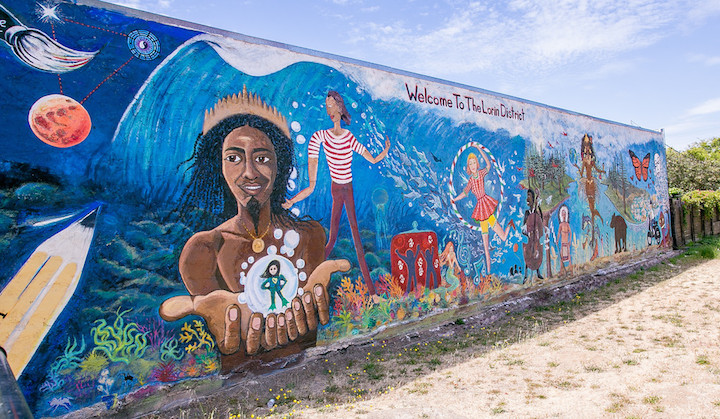 Art is not eternal.  Murals are intrinsically temporal – they come and they go.  We seem to be in no danger of losing our mural identity, but over the last year we have lost more than a few murals.   The “Welcome to Lorin” mural above has been overshadowed by a new building in what here was a vacant lot – gone are these images.

Speaking of overshadowing, the new Stone Fire Building at the corner of Milvia and University has now completely blocked the north-facing windows of the Tioga Building at 2020 Milvia,  The second and third-floor windows featured post-it art, now obstructed: 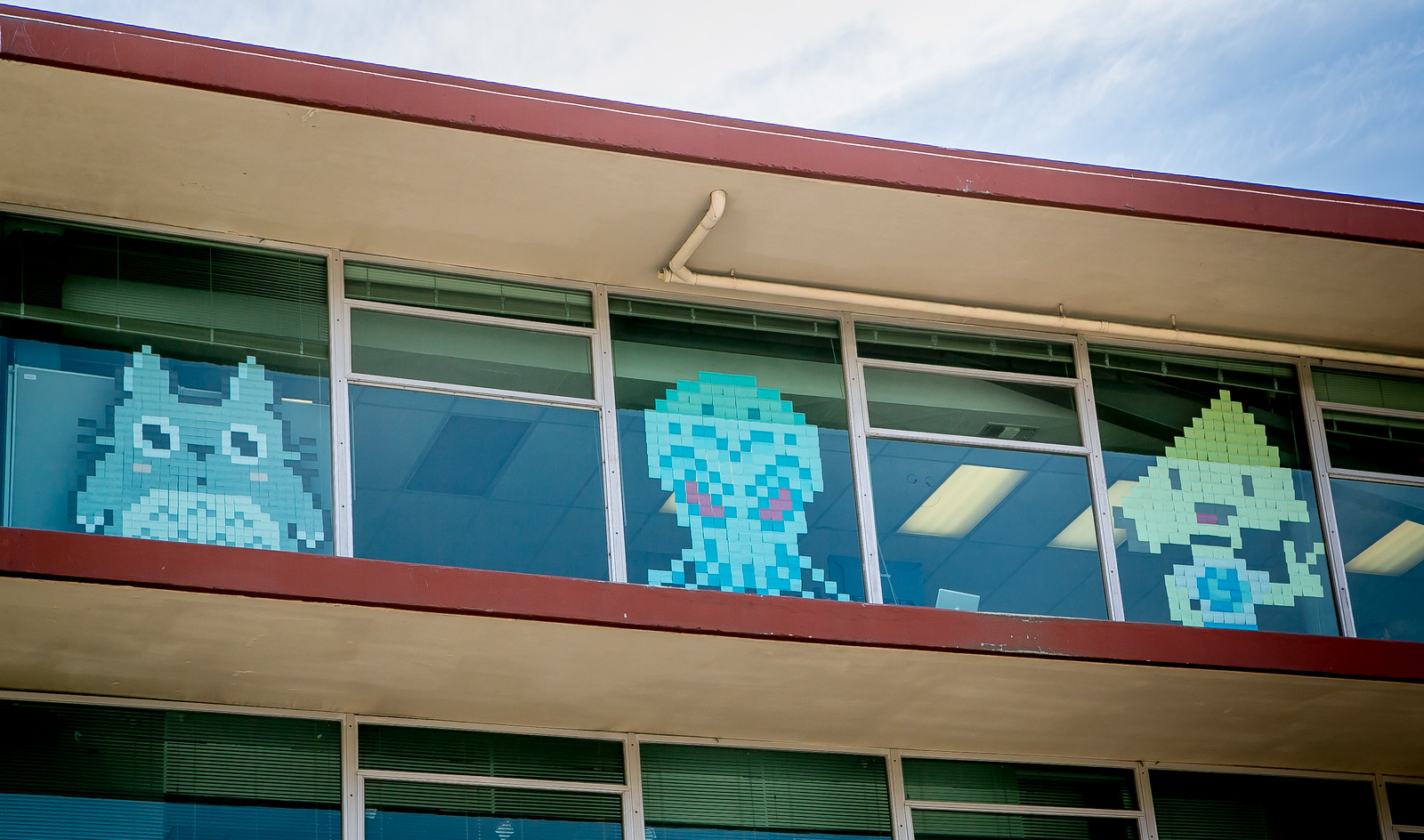 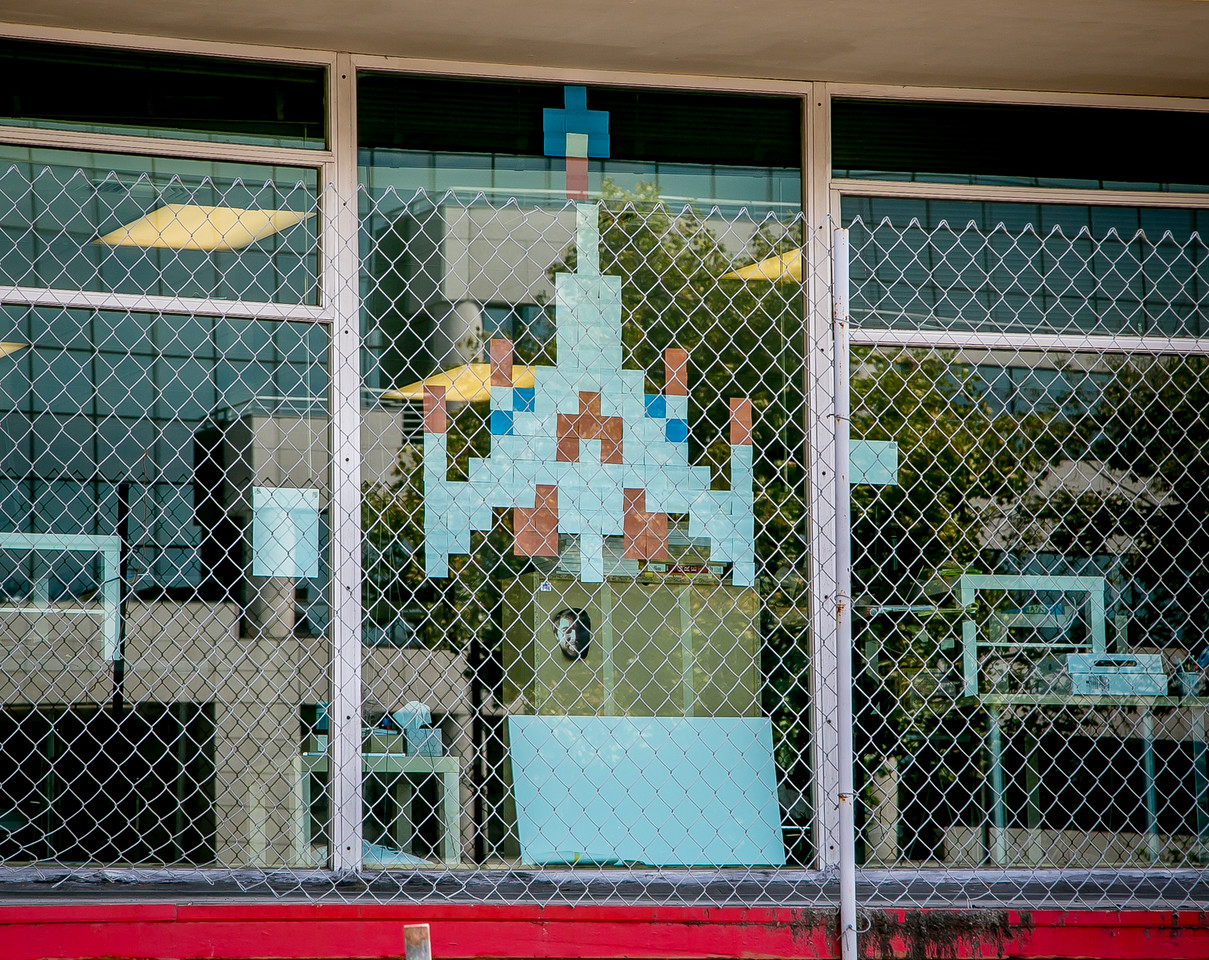 Also relocated to the dustbin of memory: 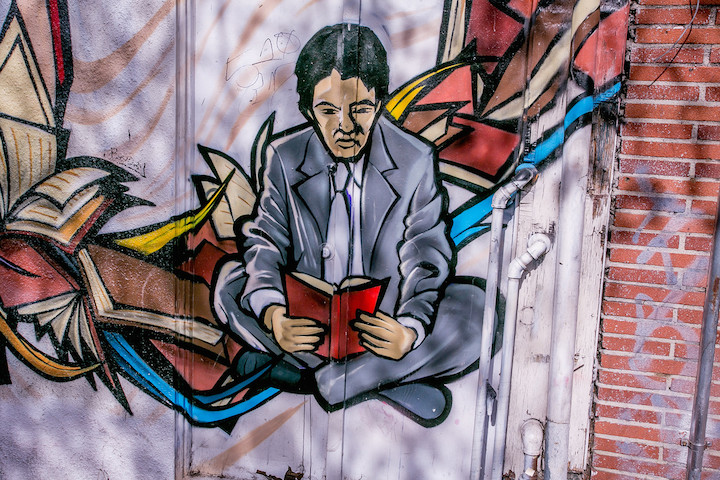 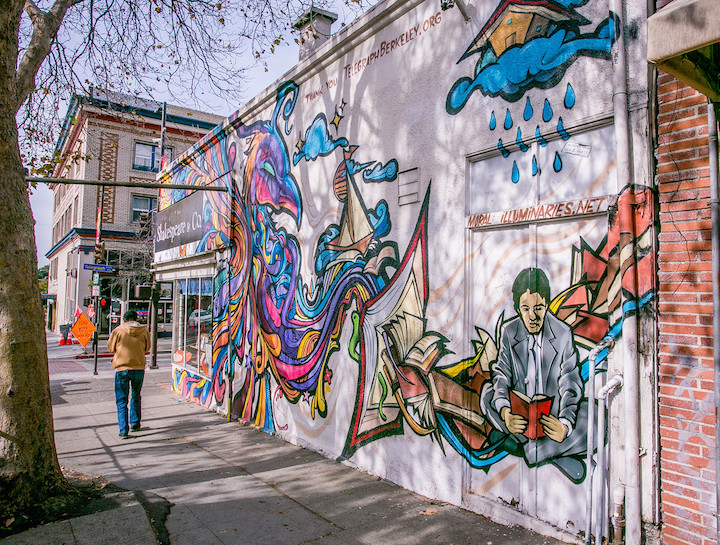 The mural was spray-painted in 2013 by Tim Hon and Steve Ha of the Illuminaries art group.  Shakespeare Books closed in 2015, and when reconstruction began on the entire northeast corner of Dwight and Telegraph, we lost the mural. 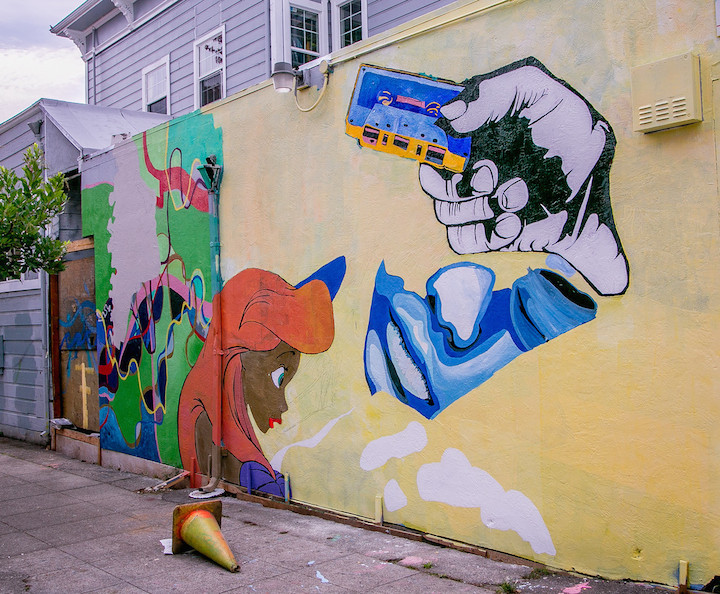 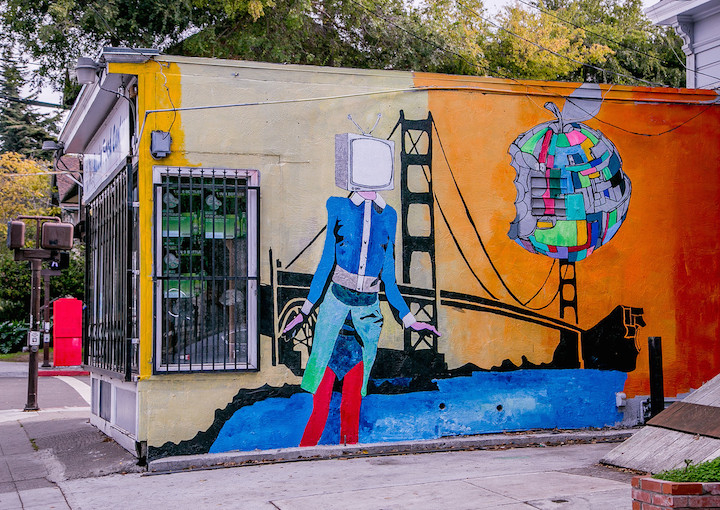 The Roxie Food Center at Dwight and Ellsworth was until the last year a little neighborhood bodega.  There were several generations of murals on the building.  My favorite may be a false memory – it was on the east-facing wall and it was a horn of plenty filled with soda, beer, candy, and cigarettes.   The Roxie is no more, back to residential.  And the murals are no more.

No far from these two: 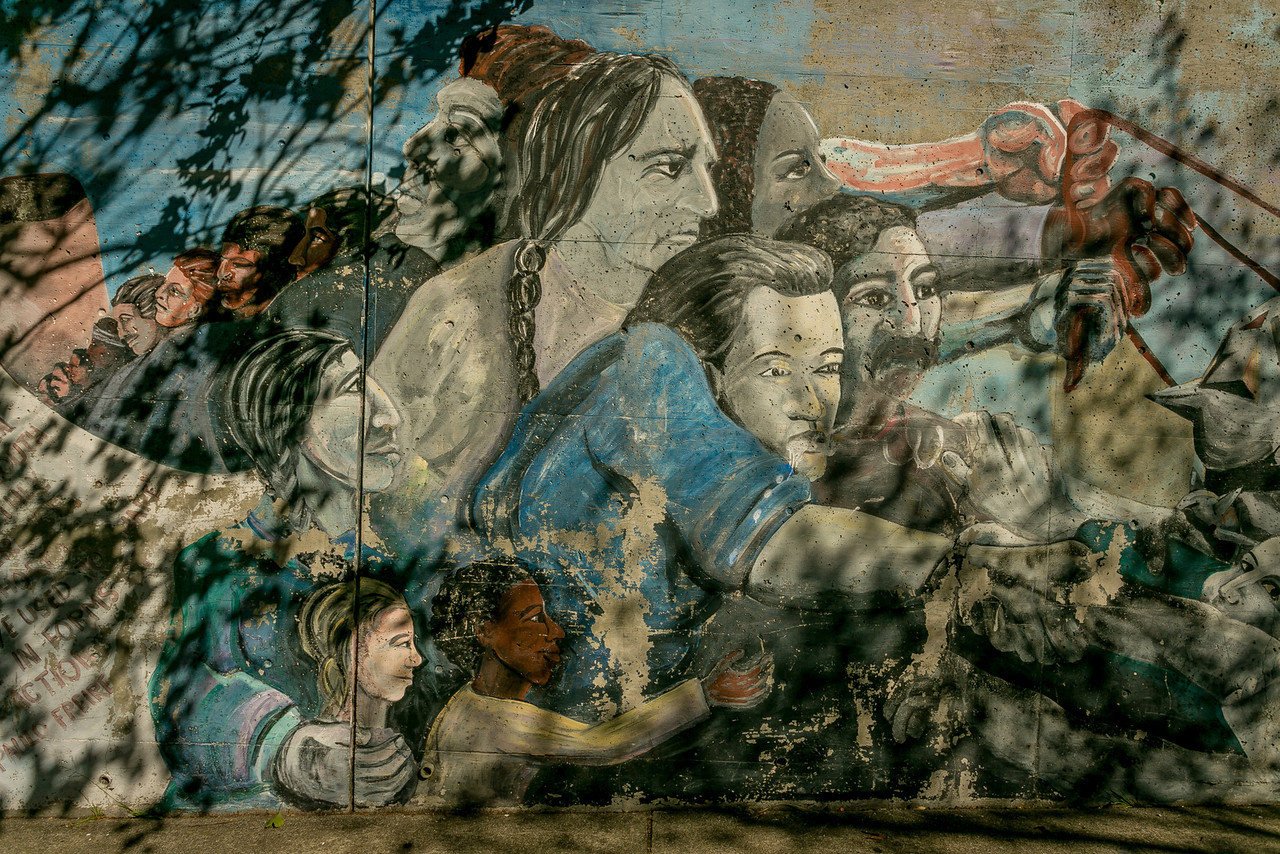 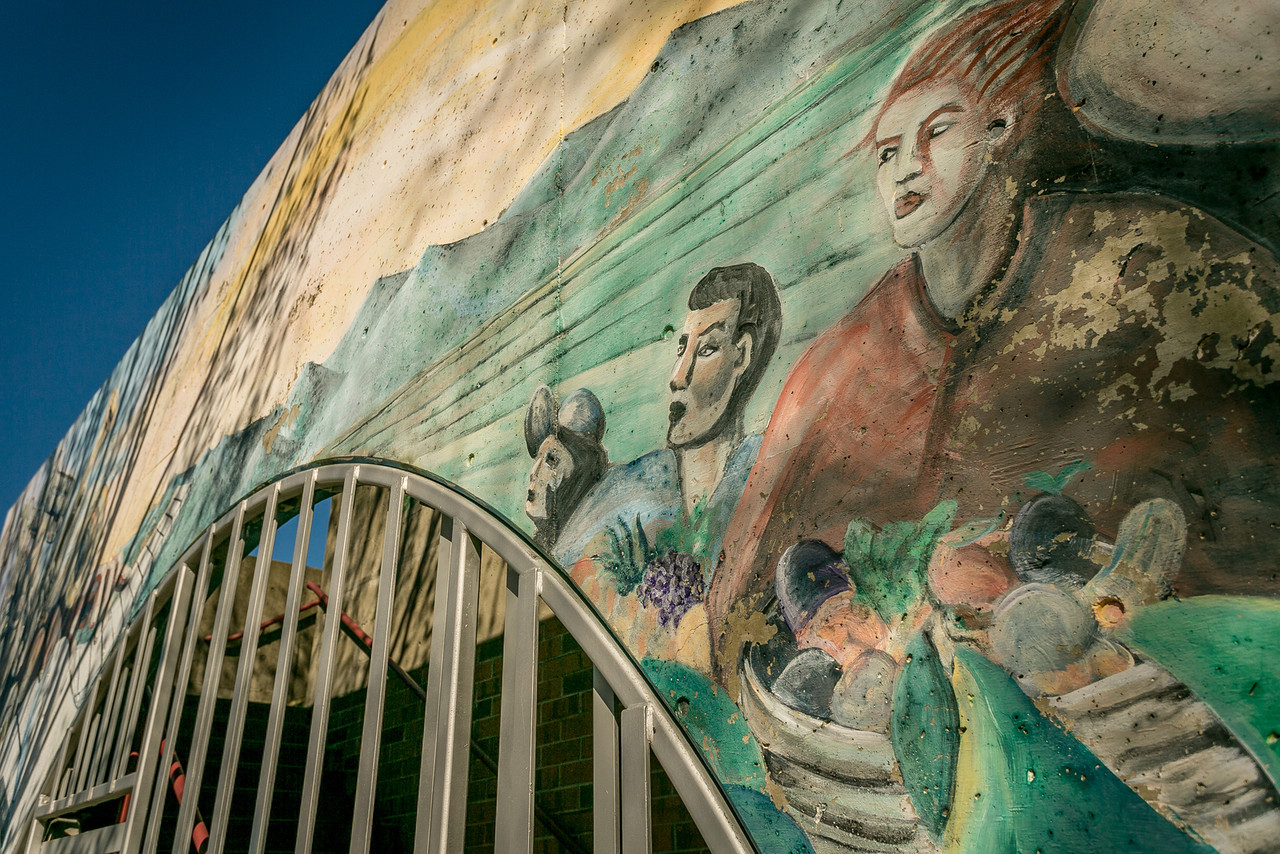 On the south-facing wall of Willard School on Stuart Street, there was a mural designed and painted by Malaquias Montoya in 1987 with help from California College and Arts and Crafts in Oakland.  It depicted heroic, multicultural figures in struggle and a dysptoian vision including American, Soviet, and British robot dogs.

The western end of the mural is still there, but this summer a more cheerful, colorful, apolitical celebration of Willard students replaced the Montoya dystopian vision. 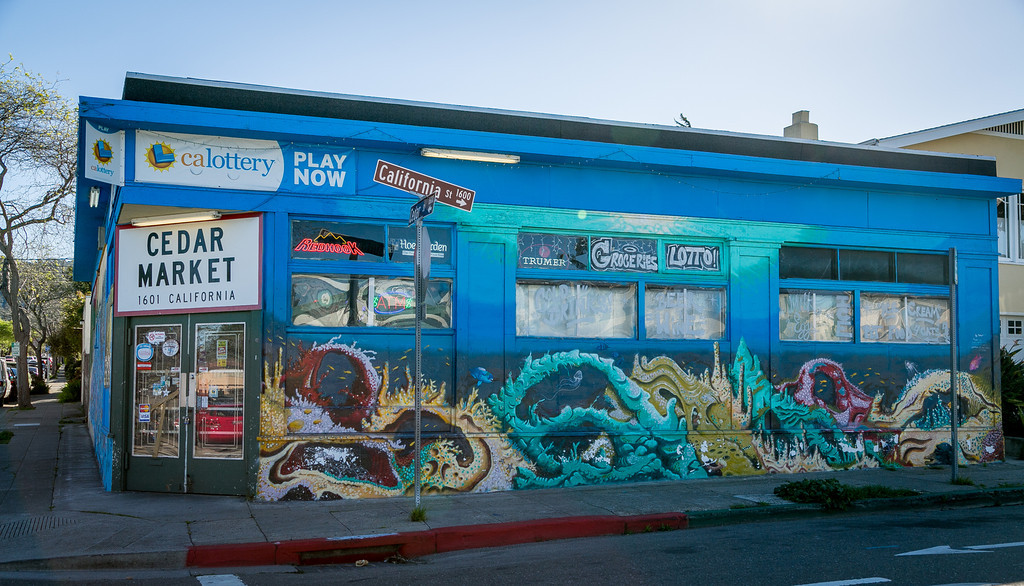 The west-facing mural of the Cedar Market at 1601 California is gone. The store reverted to its original design, with large windows looking out onto California and letting light into the store.  The north-facing GOOD VIBES mural along Cedar is alive and well.  I liked the west-facing mural, but the re-introduction of windows and daylight in the store are a good thing.

The next ones hurt.   Popeyes Fried Chicken at 1776 San Pablo for a while broke the corporate mold and had small murals depicting Cajun musicians. 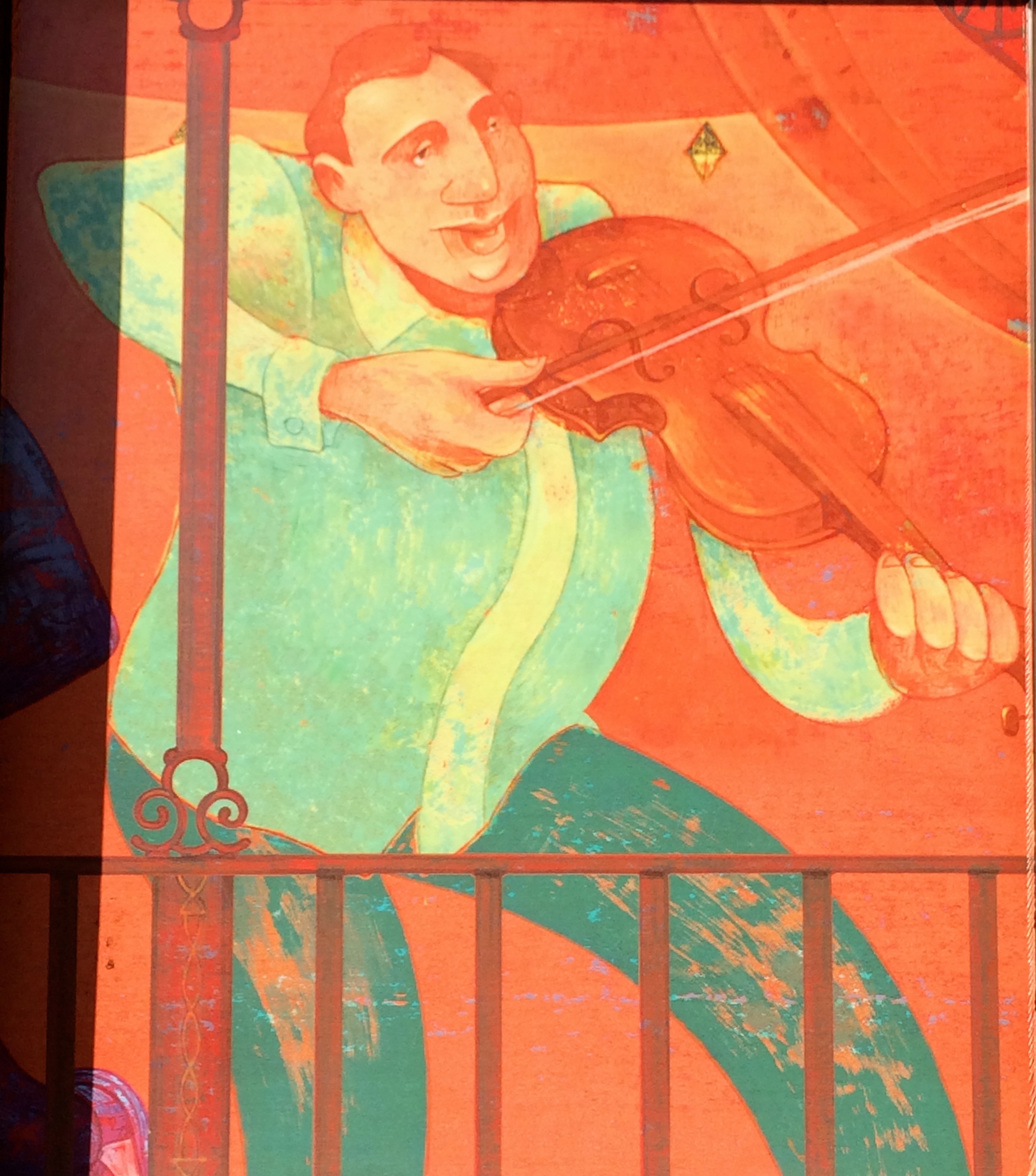 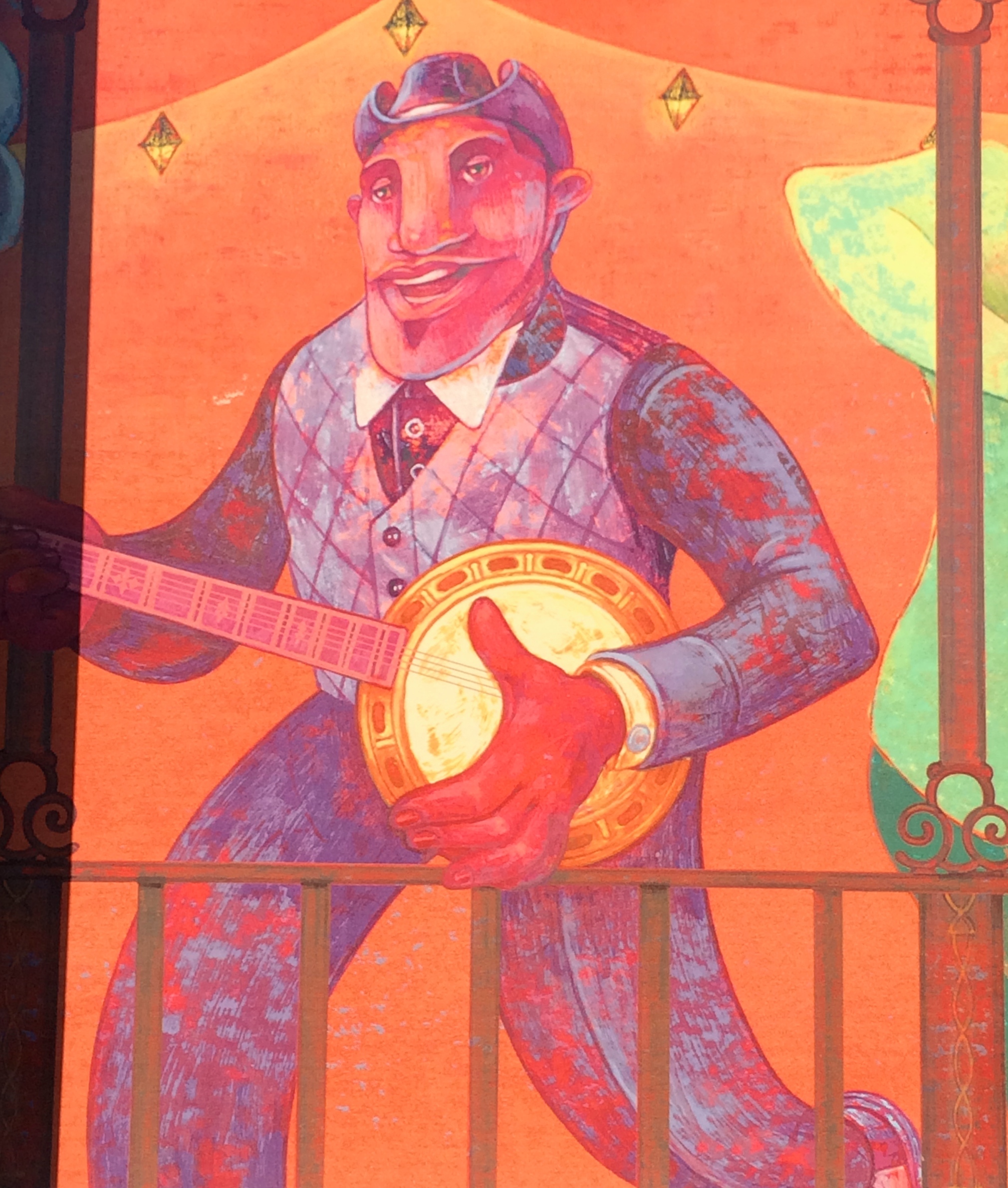 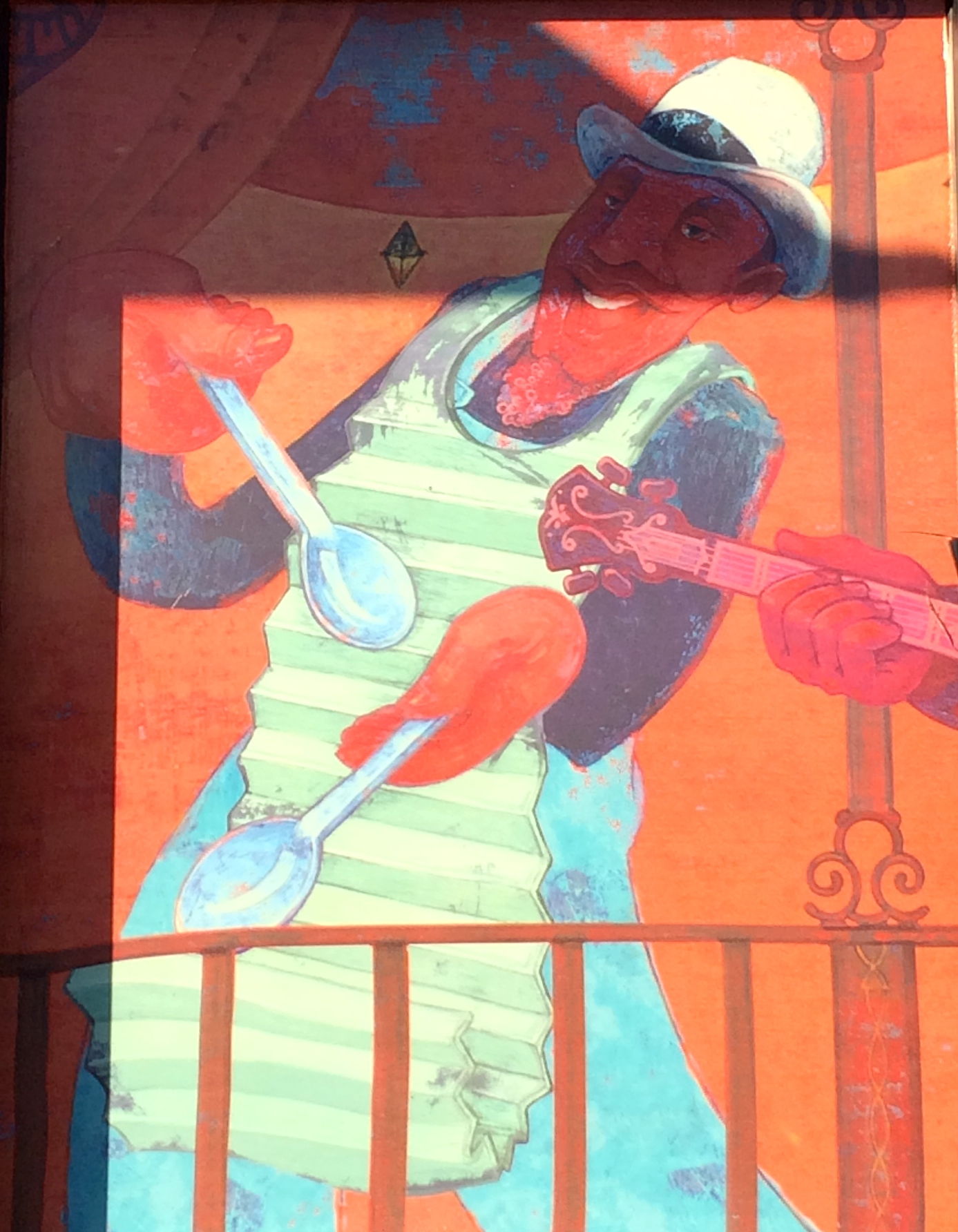 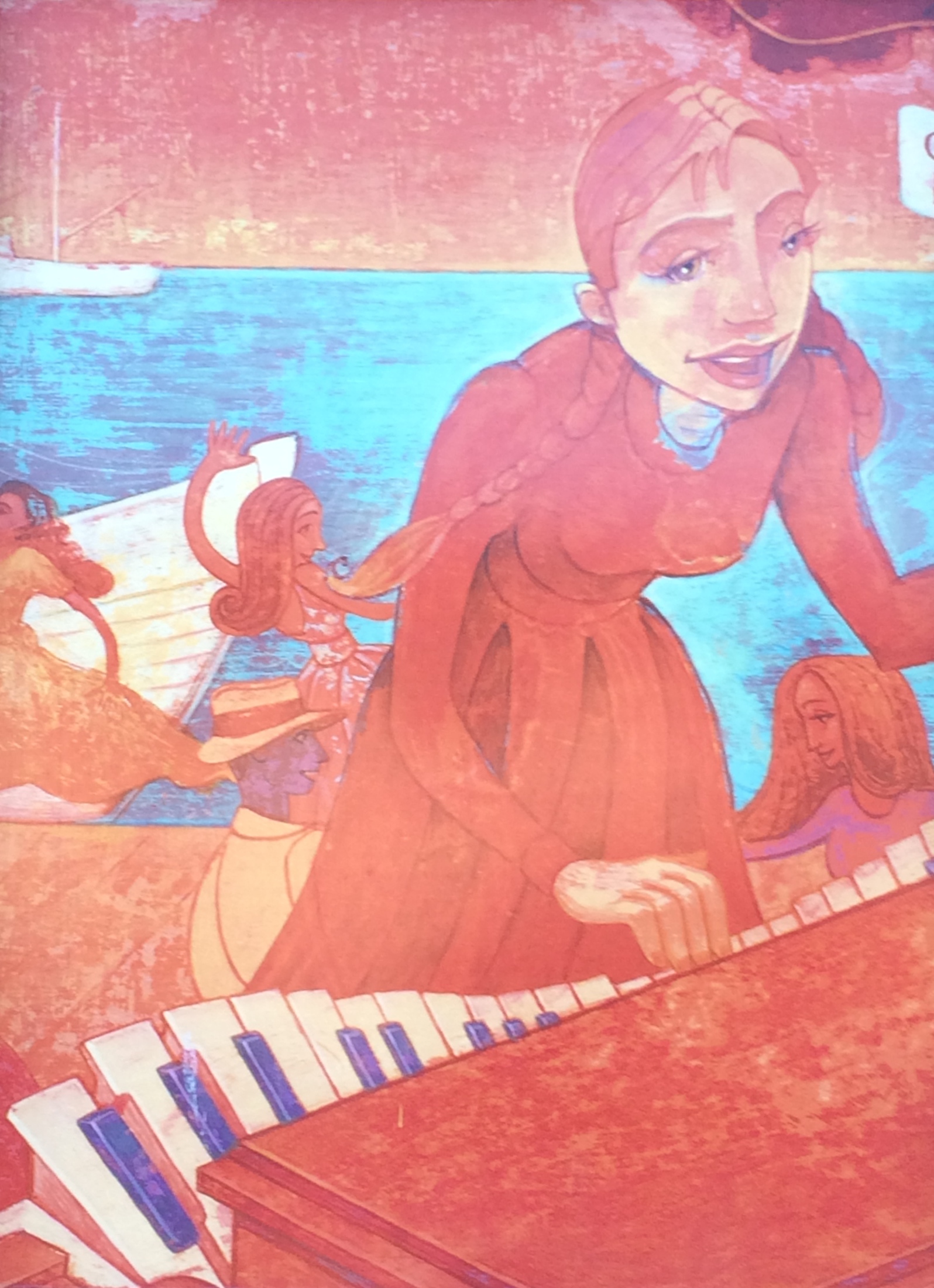 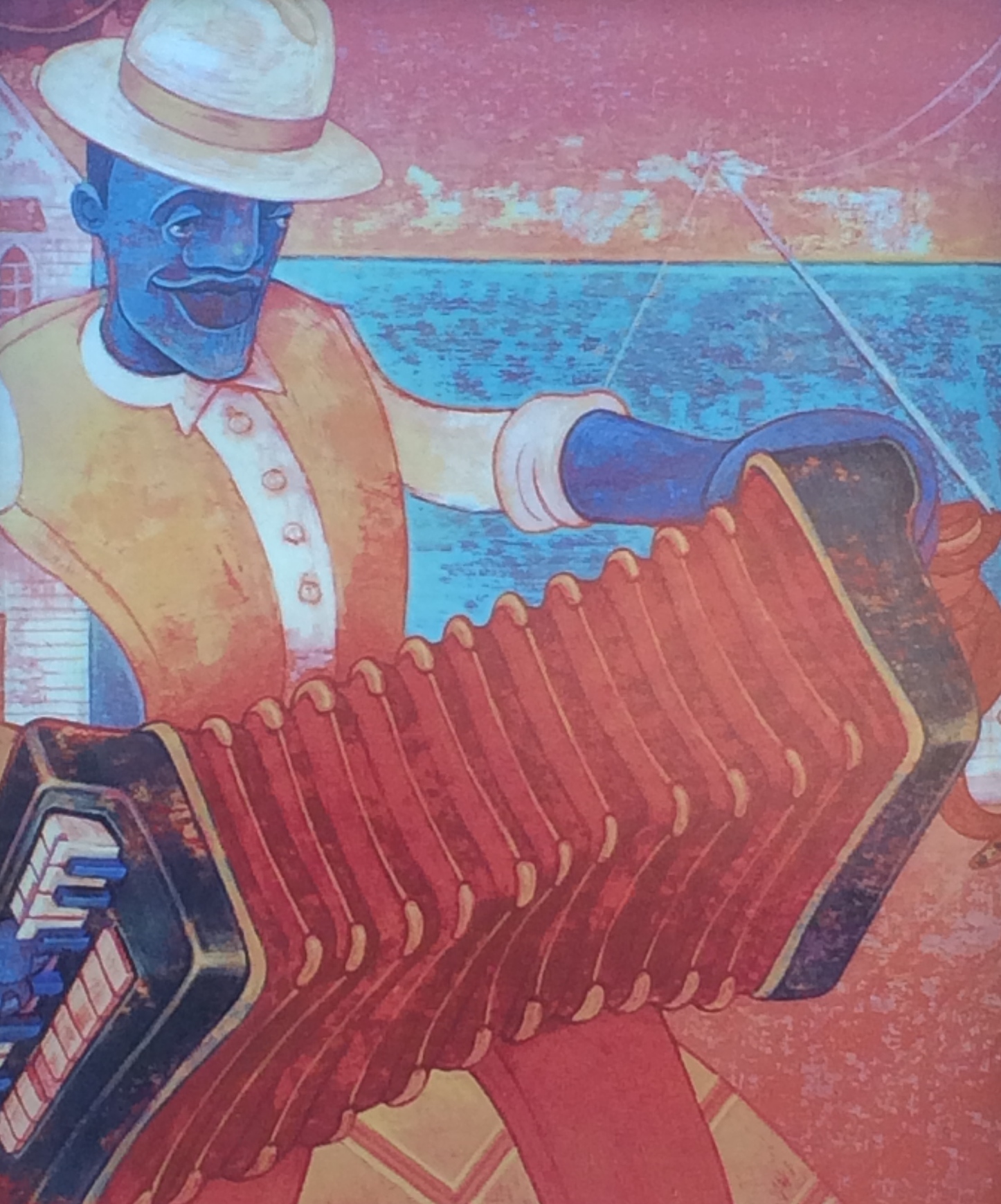 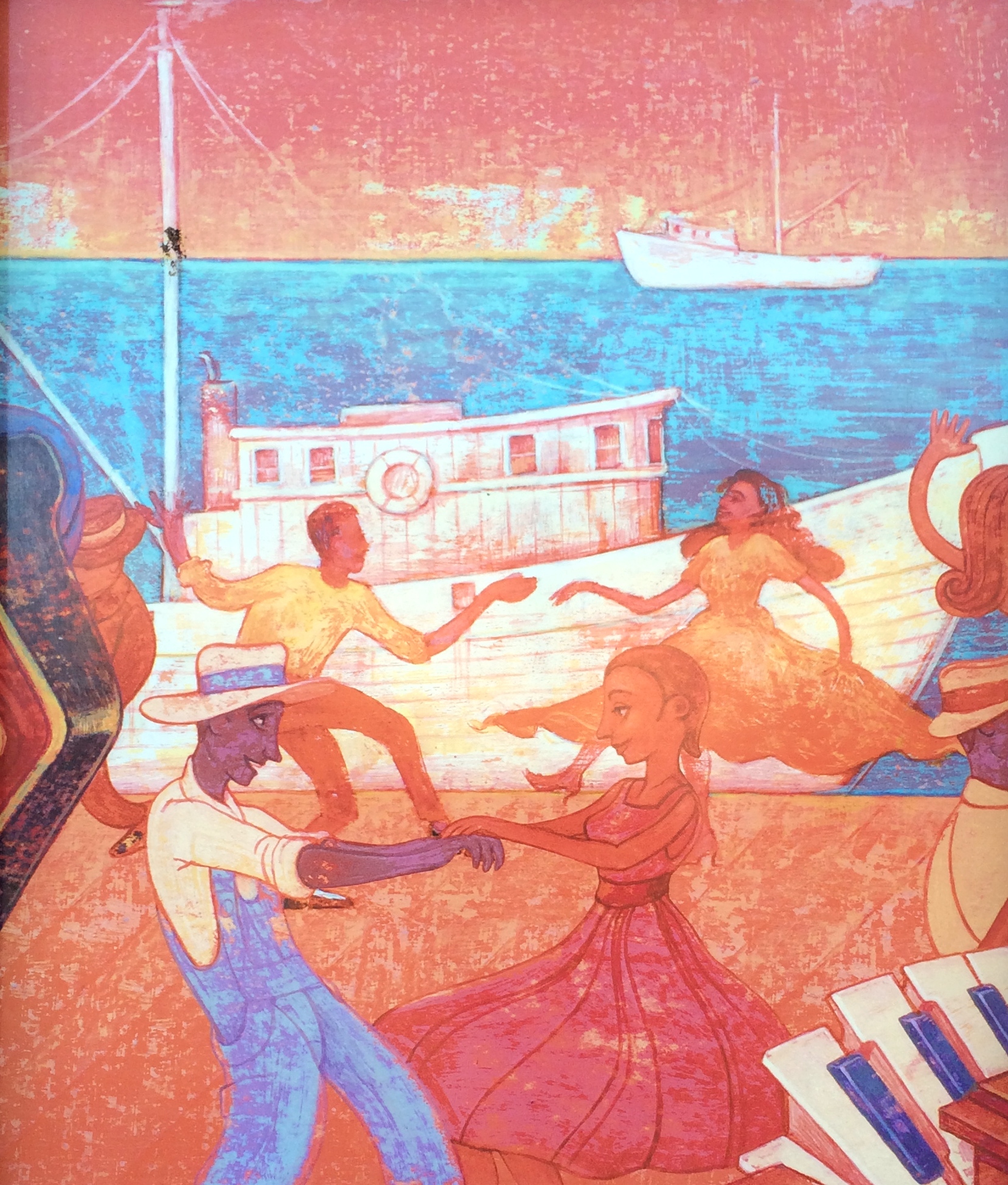 Corporate logos have replaced these lovely depictions of Cajun culture.  Too bad!

As I said above, murals come and murals go.  Berkeley is changing before our eyes, but the loss of these murals isn’t necessarily the result of the development boom.  No soapbox here or now about what is happening with Berkeley, only these photos celebrating what we once had and no longer have.

There is one exception to what I just said – the imminent loss of the mural at the old quarters of the Center for Independent Living. 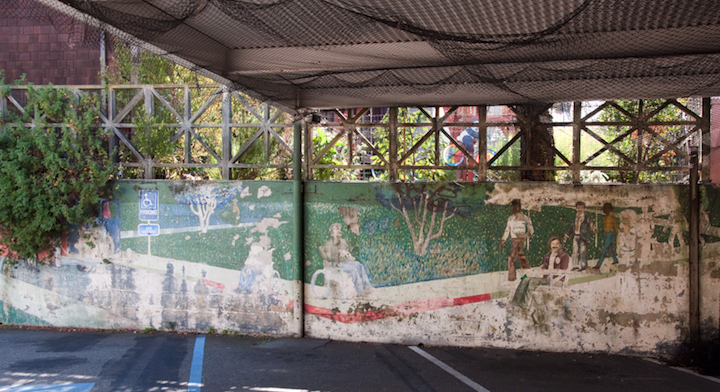 This mural is, for me, so important that dedicated an entire post to it a few weeks ago.  I went to see it the other night but it was too dark.

I showed the photos to my friend.   He lingered over the Popeye’s Cajun murals.  “The strange thing is not that they are gone, but that they were there in the first place.  I wonder what the story is behind it.”  He was born on a day where it is predicted that those born that day will want to find out the story.  They are great people.  I know one other, so maybe “they are great people” is a stretch.  Not enough data points. 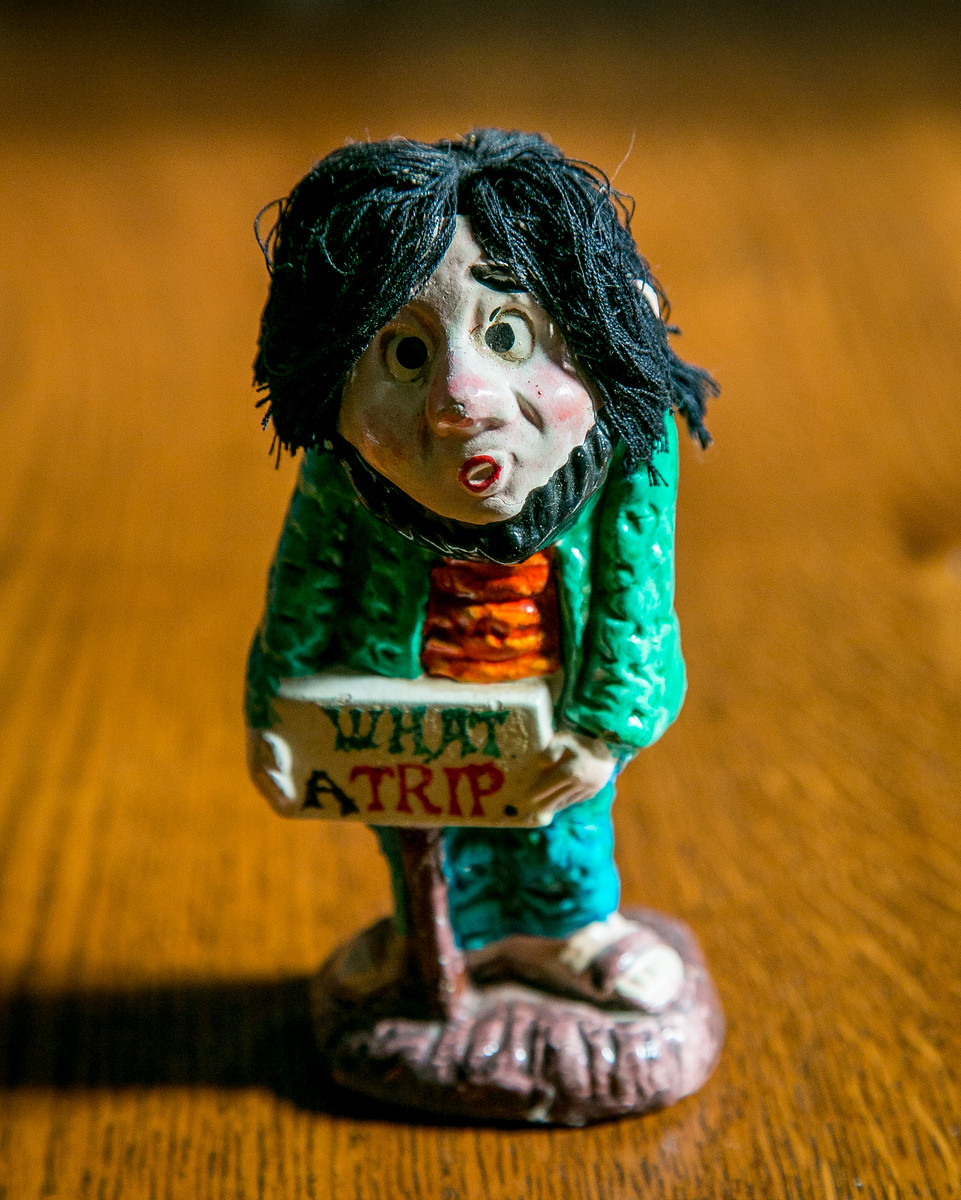