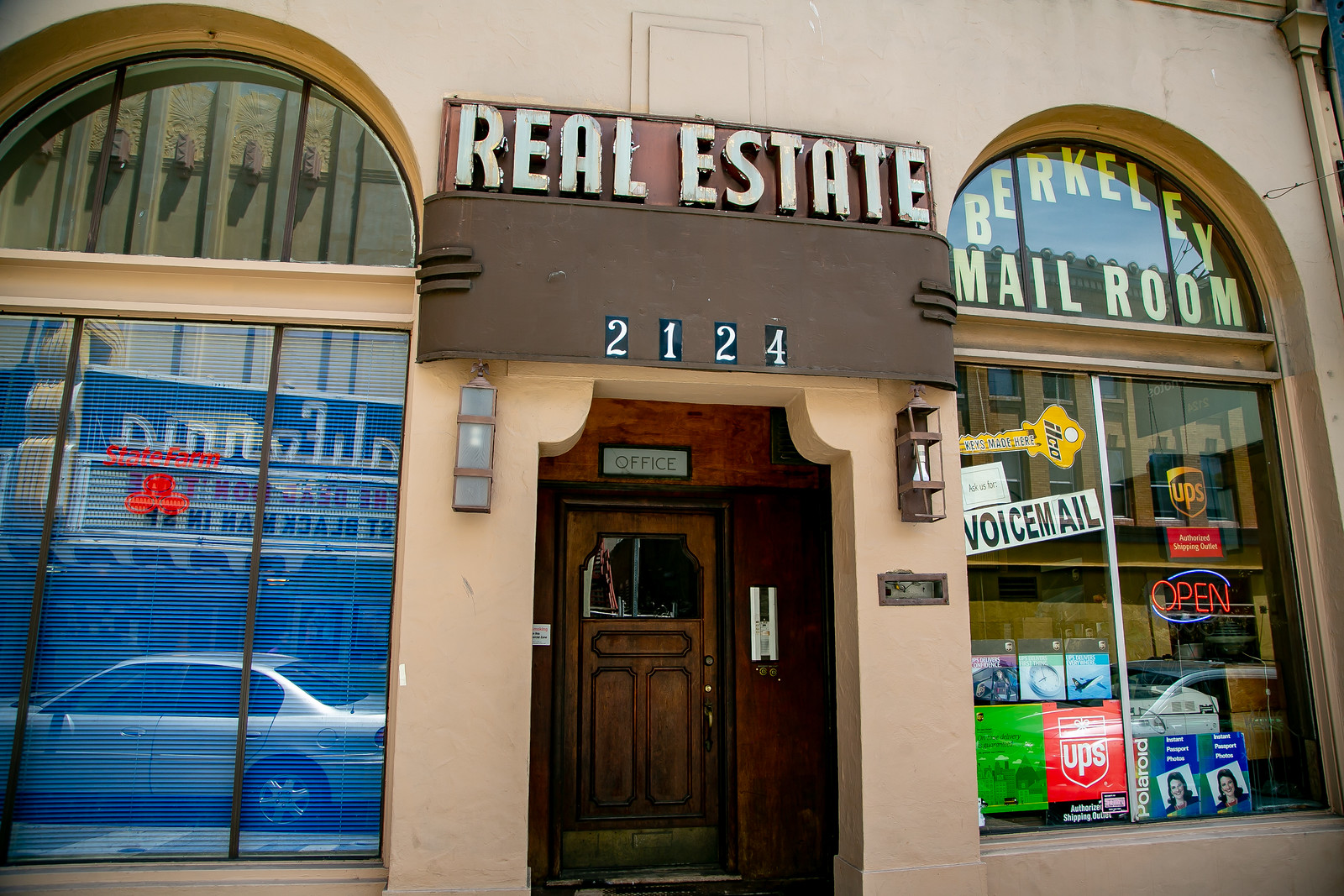 I find private mail box stores of interest in my exploration of quirky Berkeley.  Not everyone will agree with me. 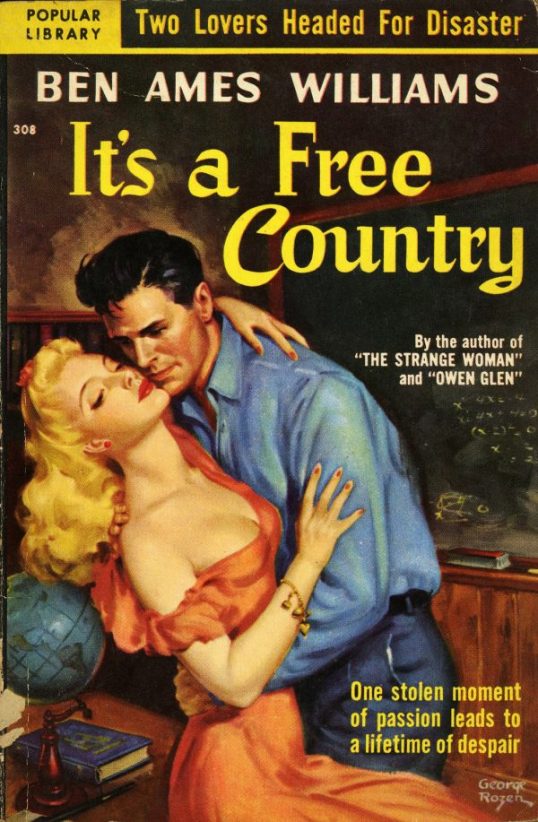 It’s a free country.  You don’t have to agree with me.  Hear me out, though.

I have posted on the laundromats of Berkeley.  They are almost without question quirky in some sense of the word as i use it.  There is a common denominator between the private mail box center and the laundromat, although I am not having an easy time explaining it.  Private business in a private public space?  I’m overthinking it, creating a problem where none exists.

Here, I look at five of the more than five private mail box centers that exist in Berkeley.  My lead photo above is from the Private Mailroom on Kittredge.  Its signage and facade are right out of a 1930s hard-boiled detective novel set in southern California. 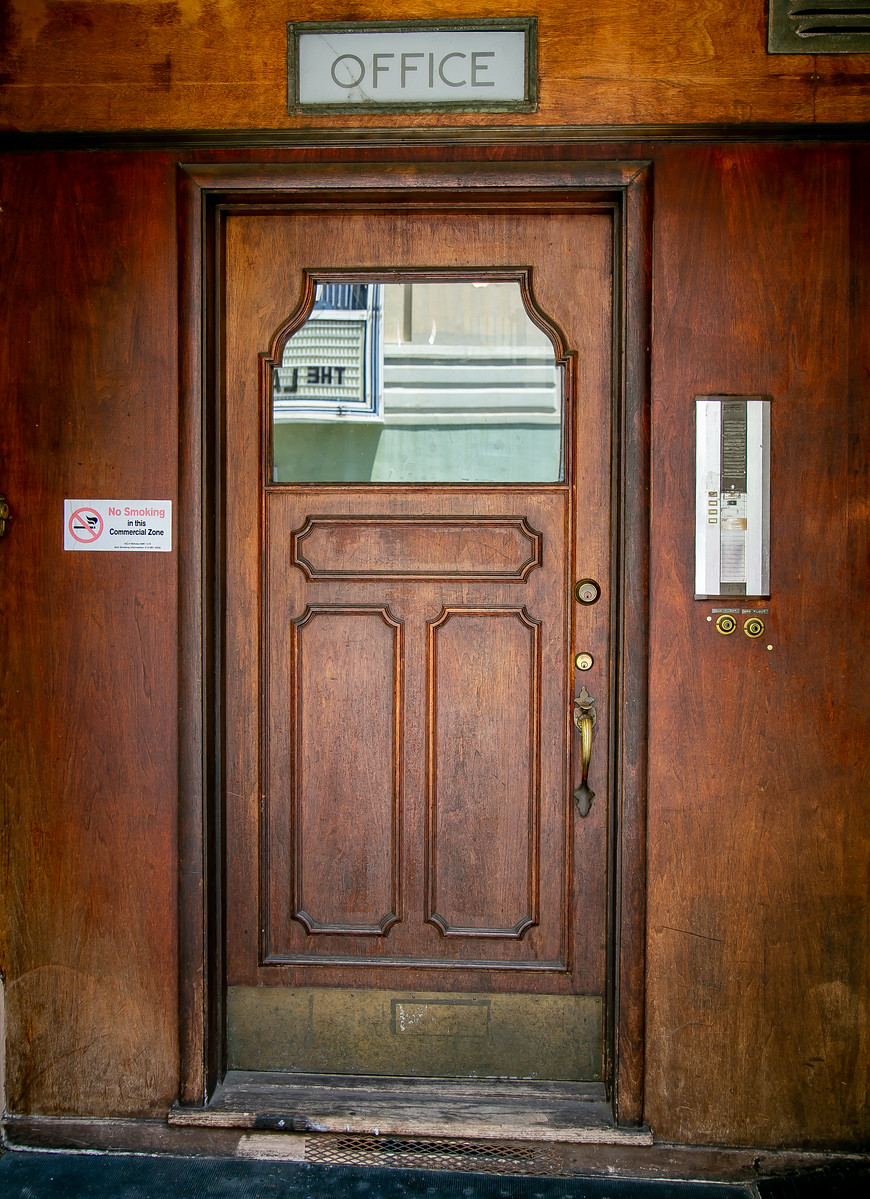 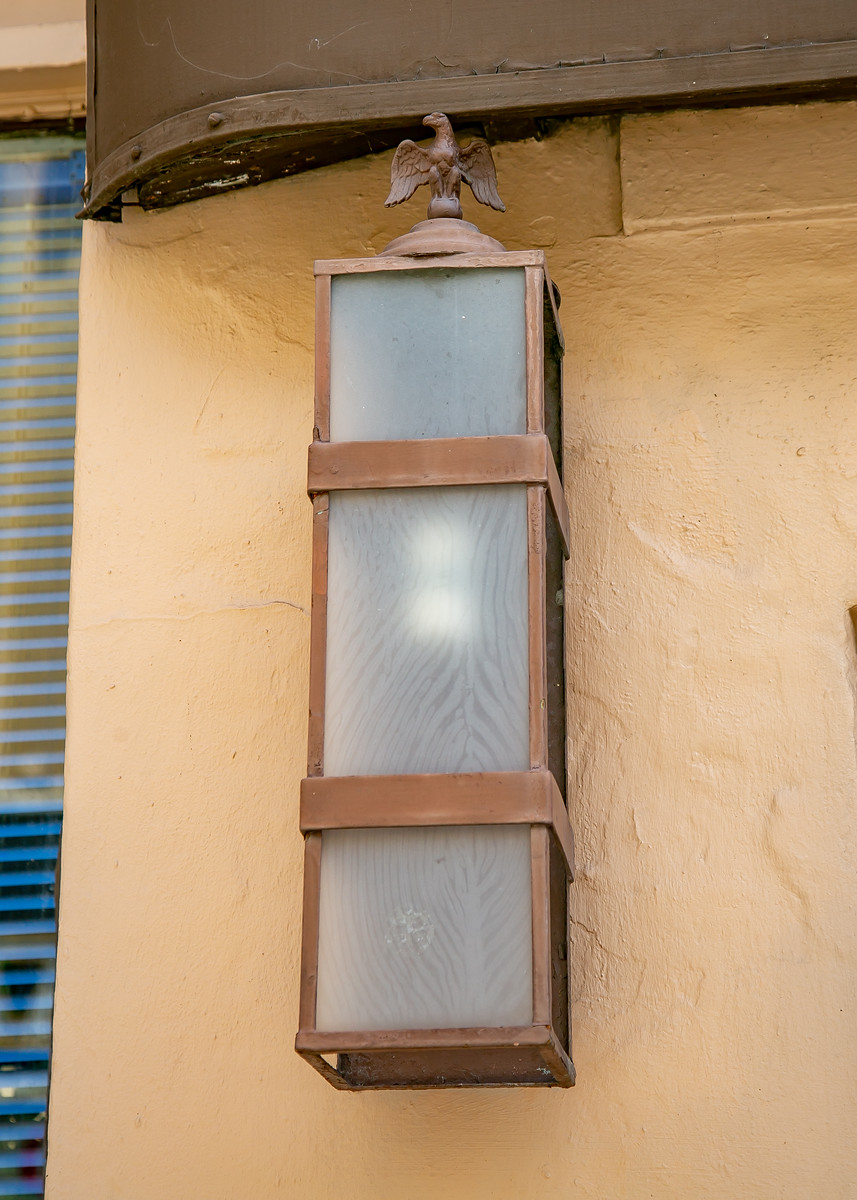 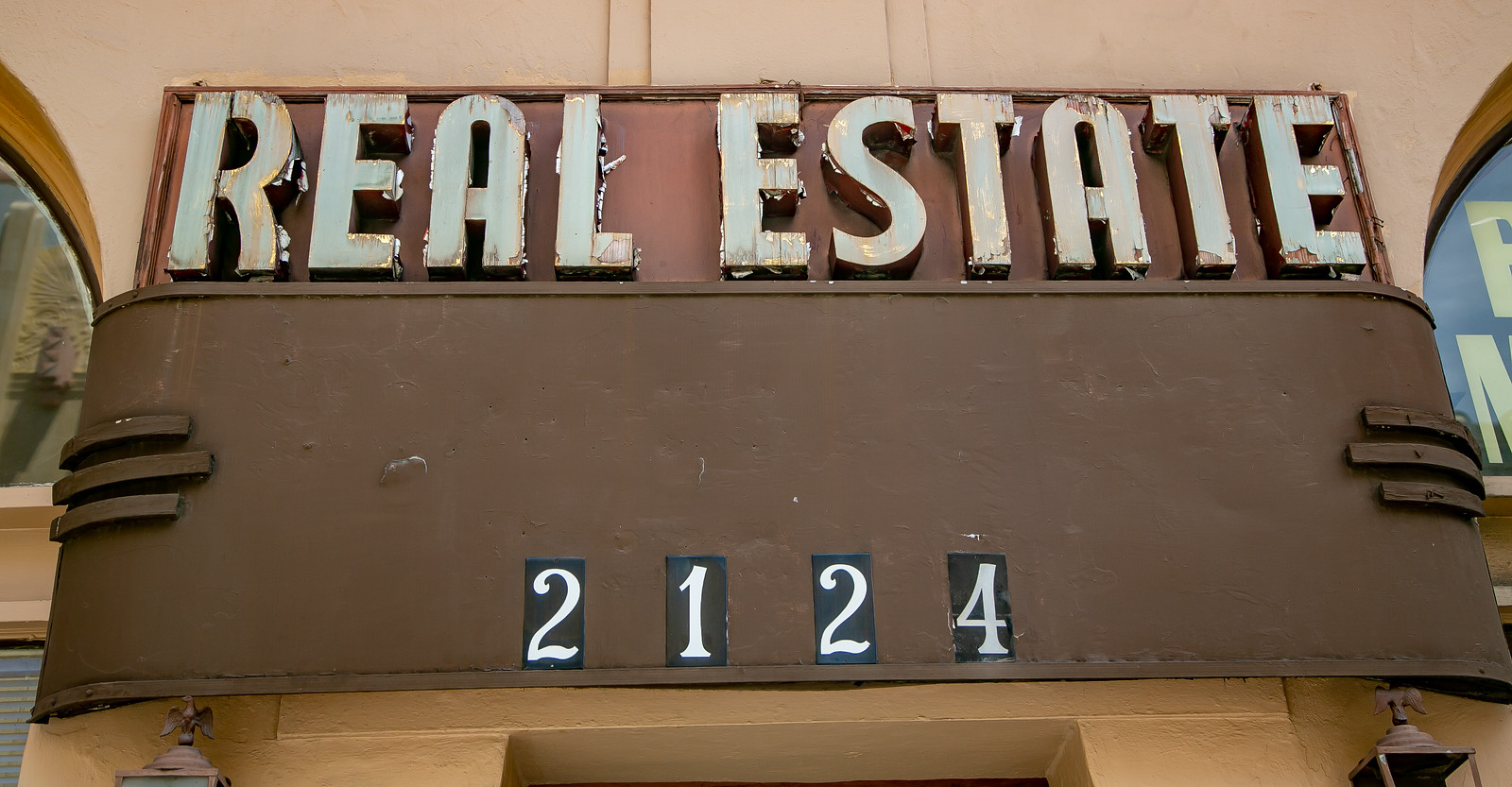 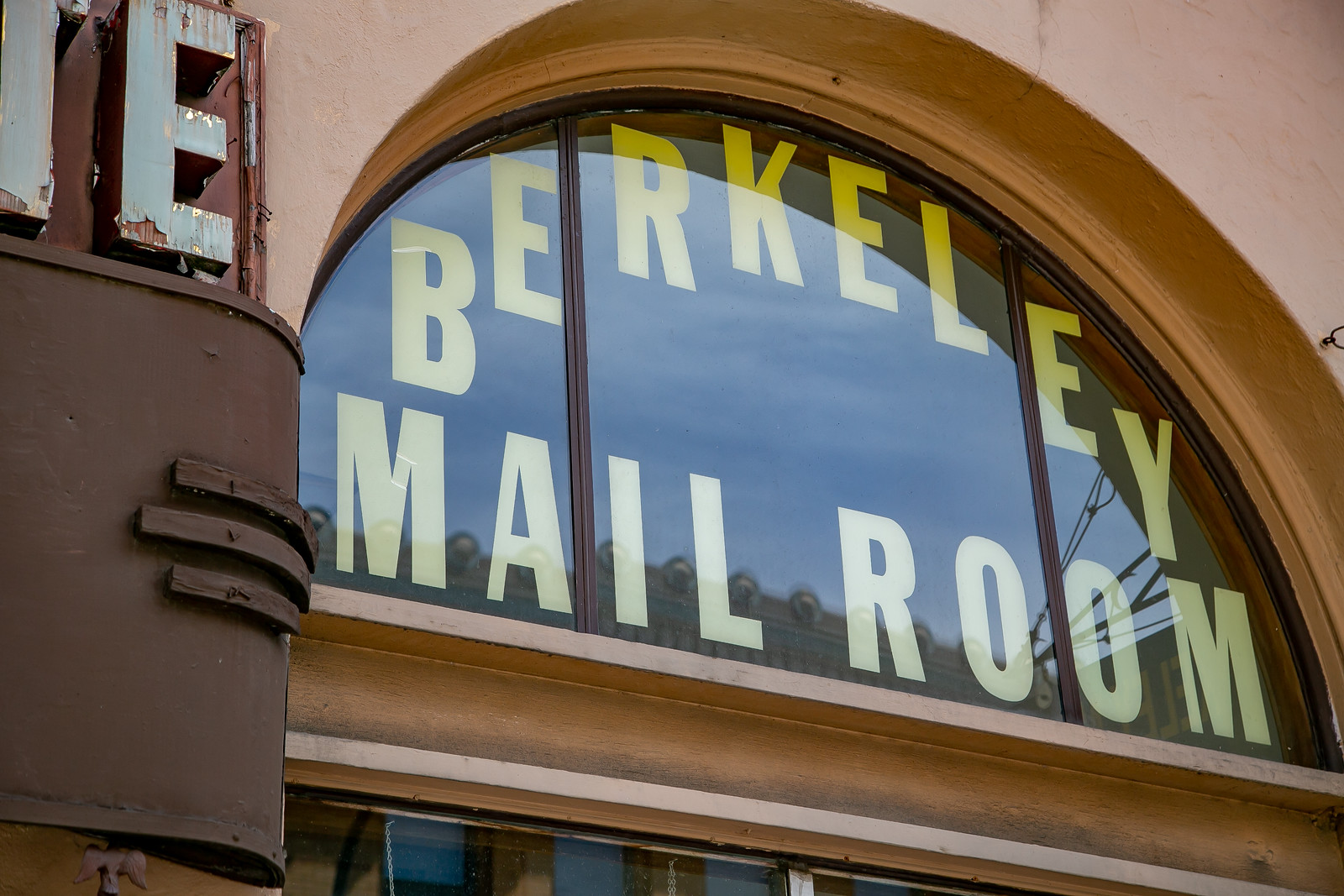 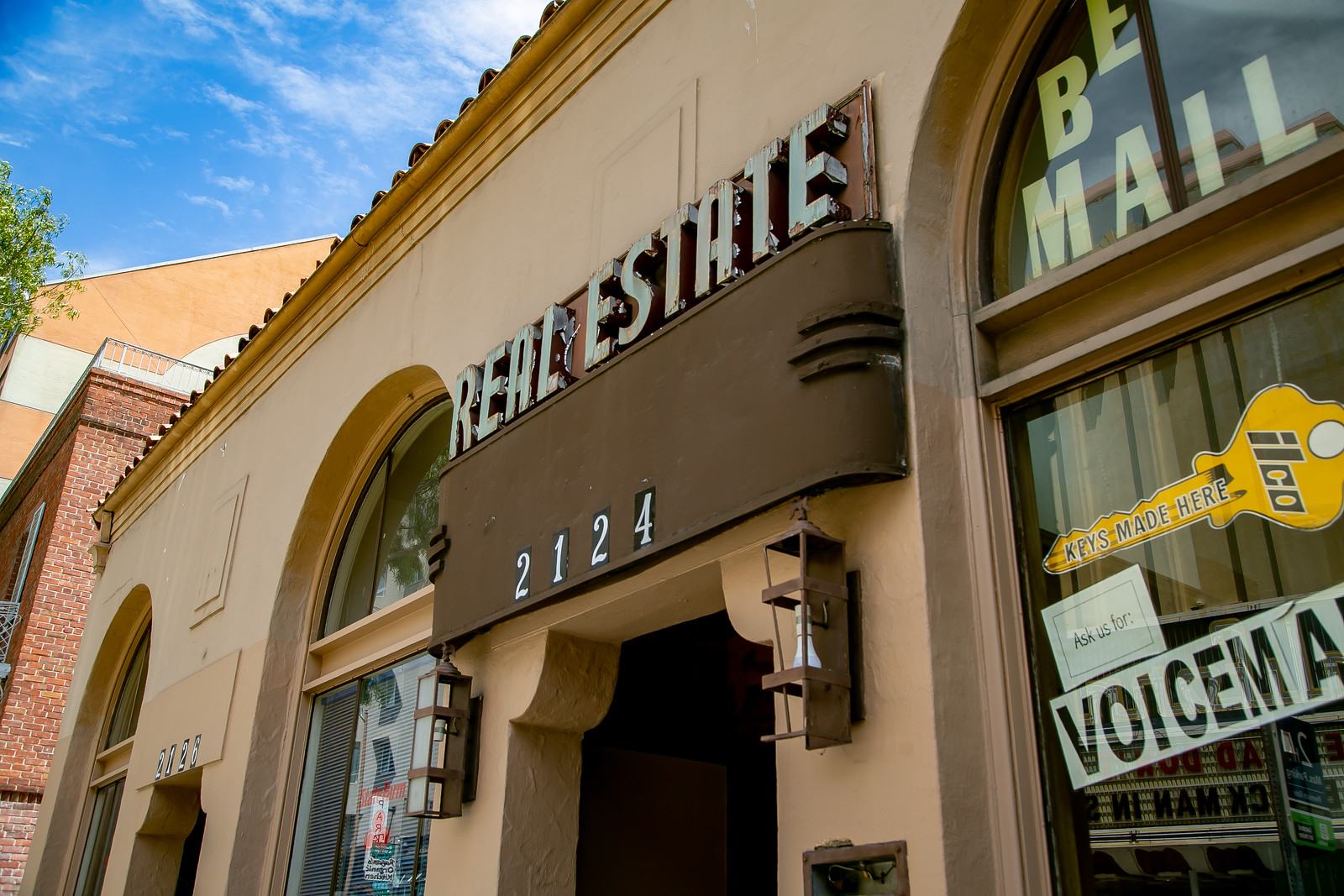 Call me a hopeless romantic, but I see the Mailroom and I am reading James Cain or Raymond Chandler, Dashiell Hammett, or Nathanael West.

Believe it or not, there is a private mail room with an exterior that is as cool as or maybe even cooler than the Mailroom. 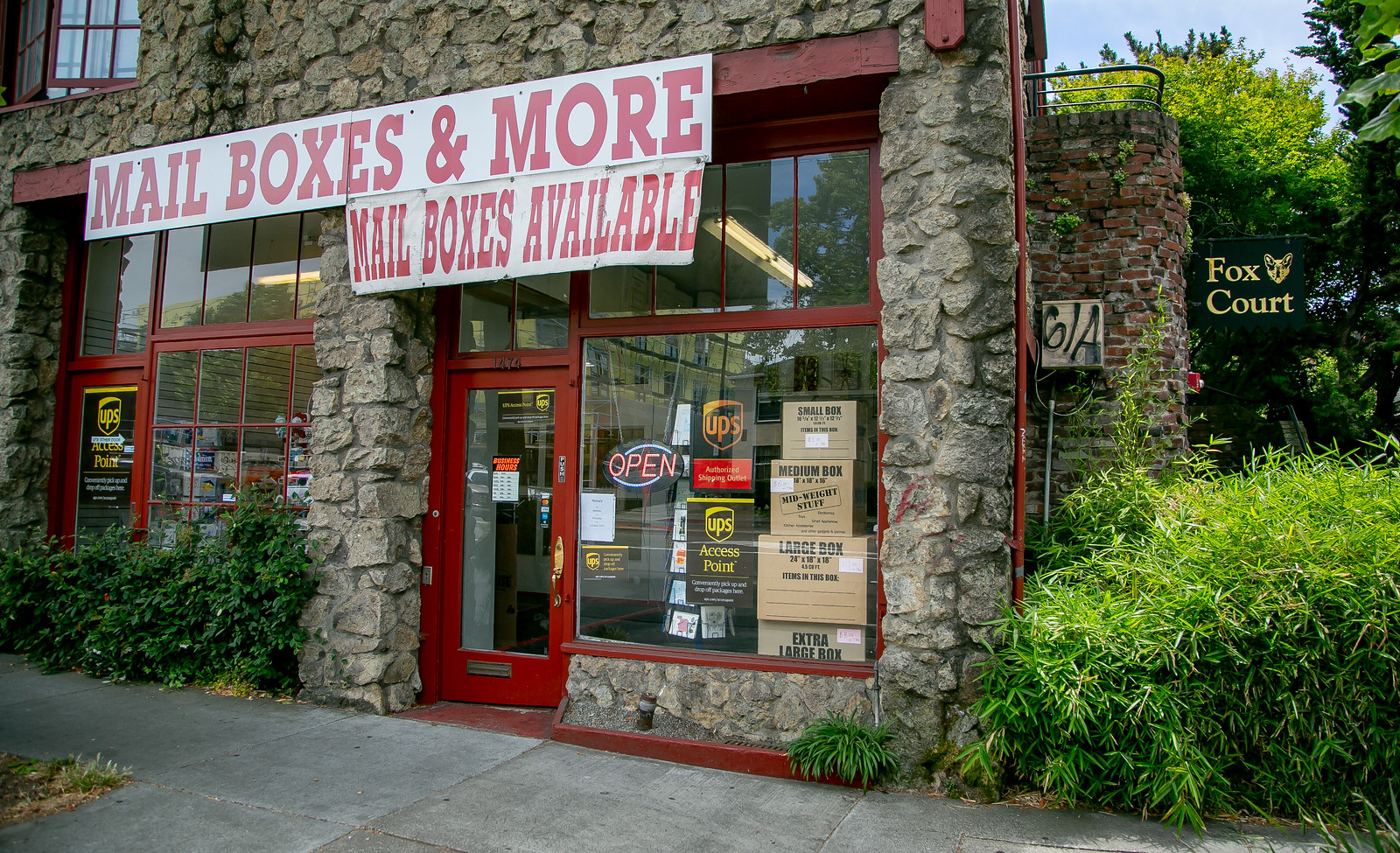 Mail Boxes and More is the street-facing portion of Fox Court, built between 1927 and 1930 by the Fox Brothers.  The architectural heritage of these Romantic Tudor Revival cottages is described in this BAHA post. 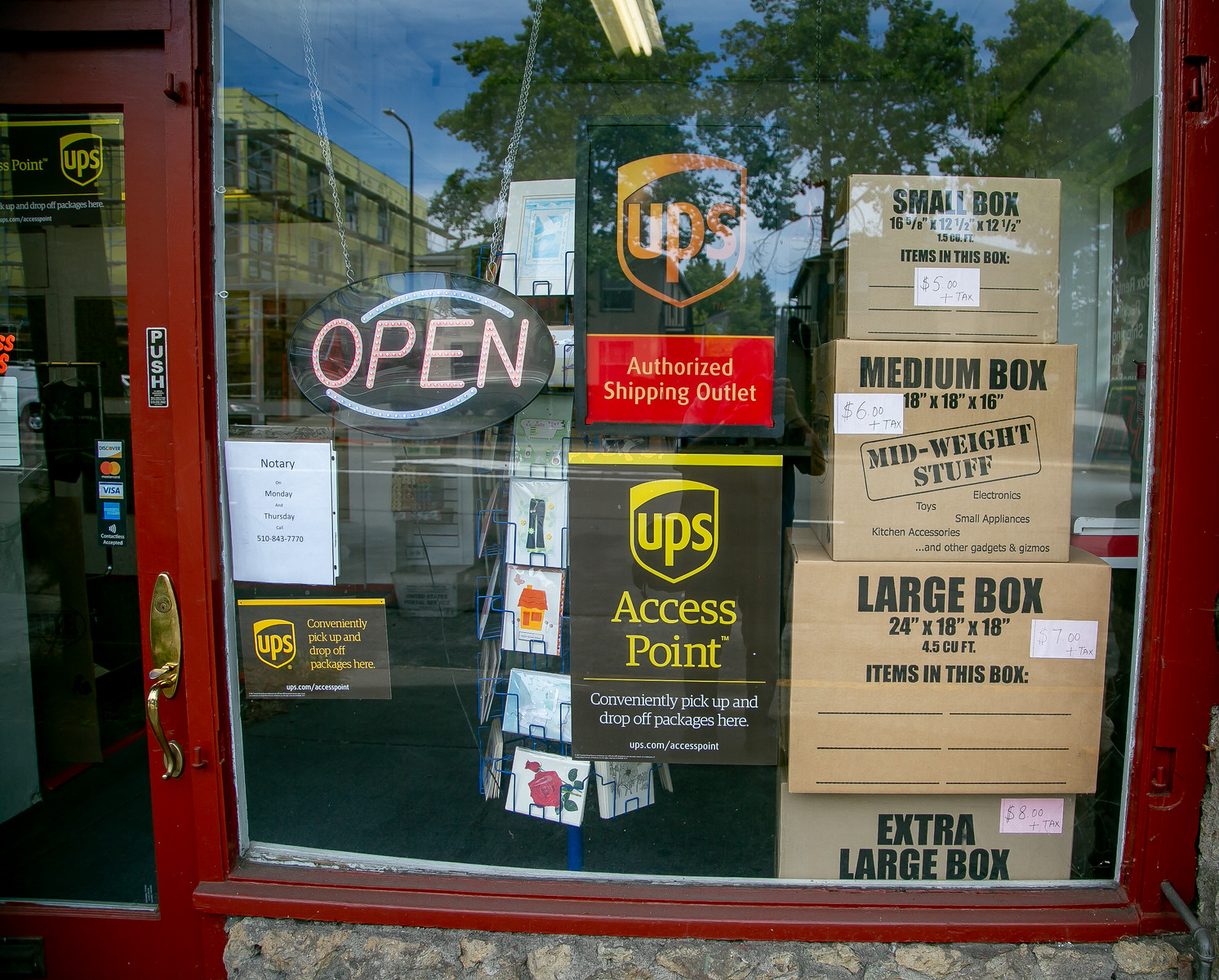 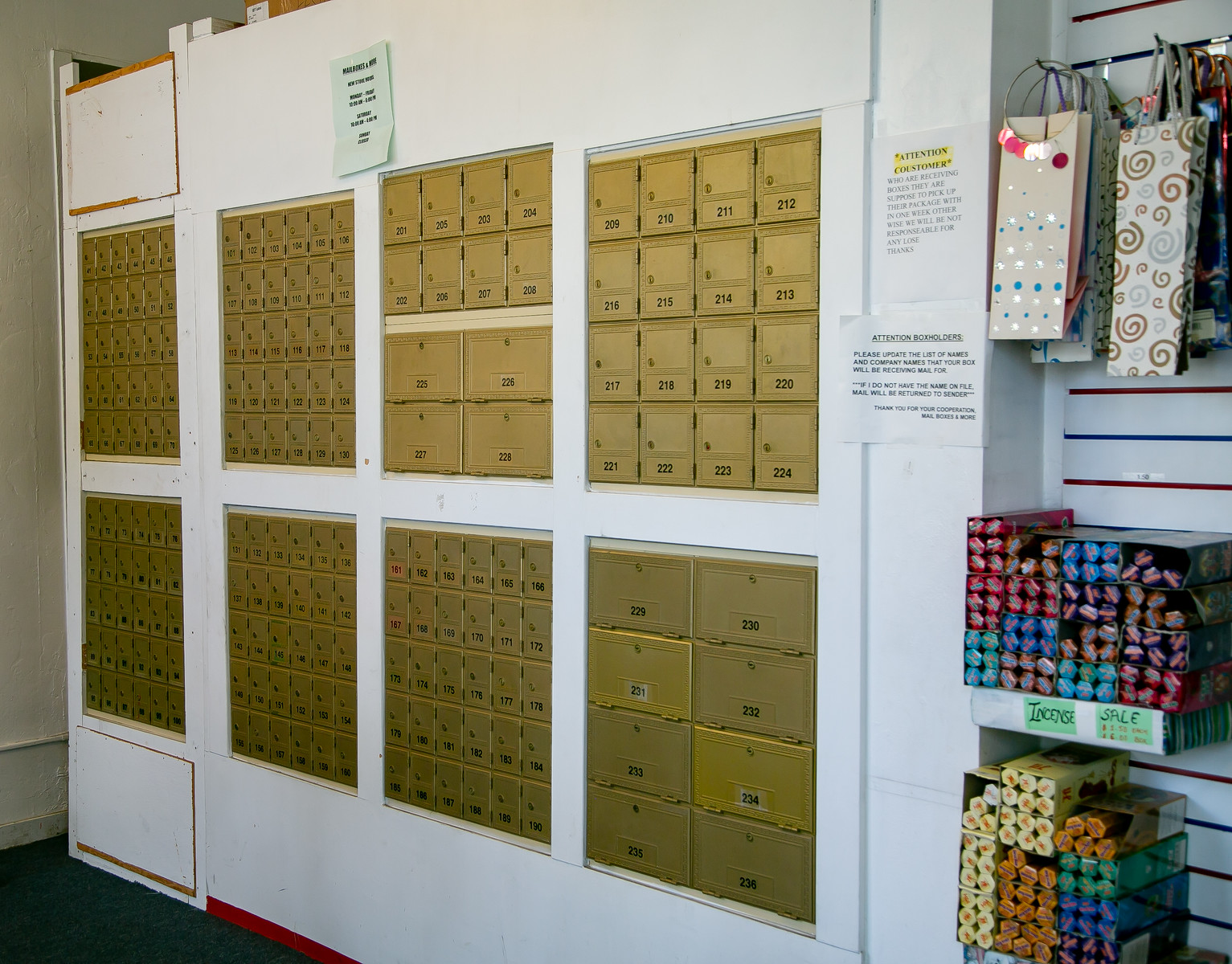 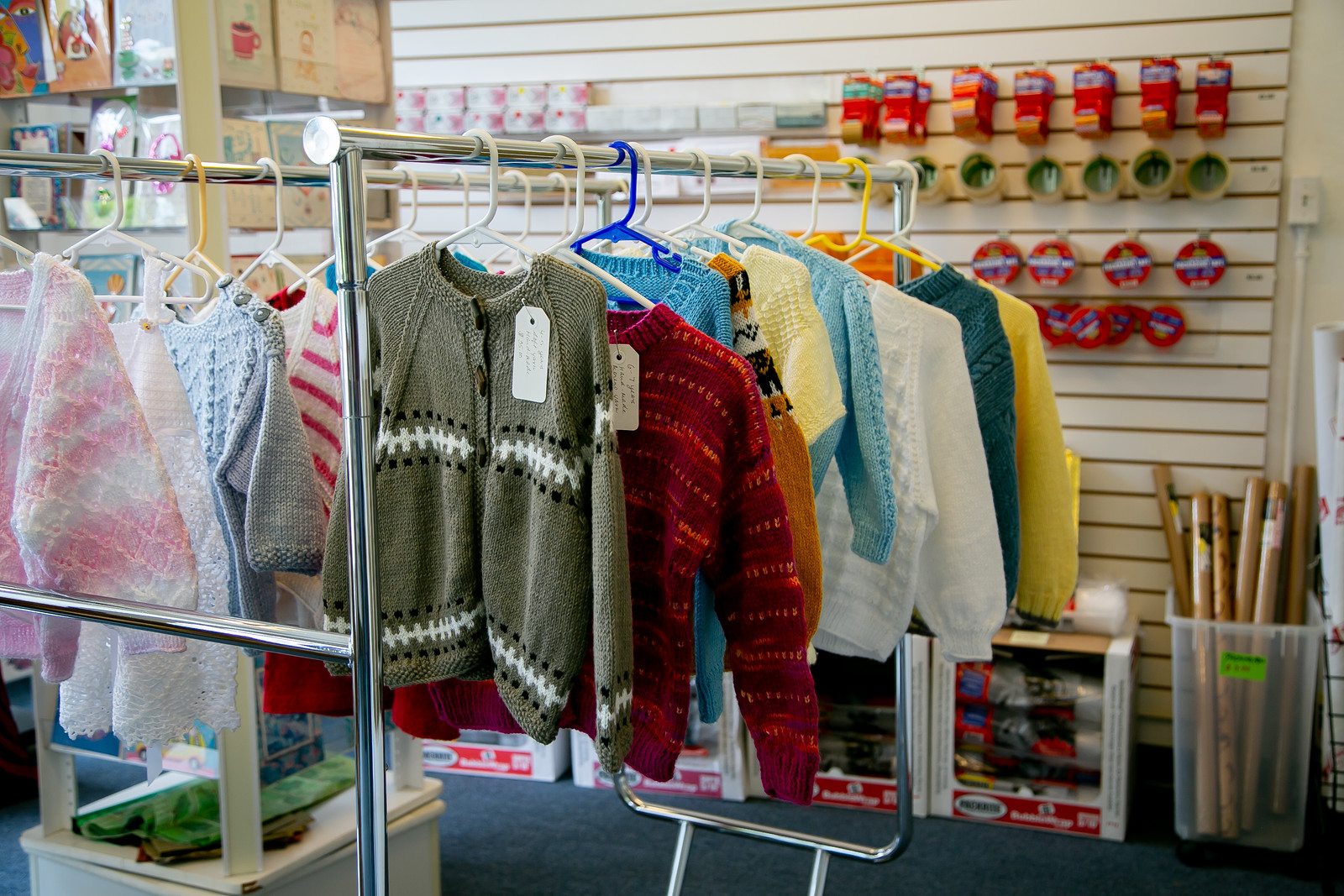 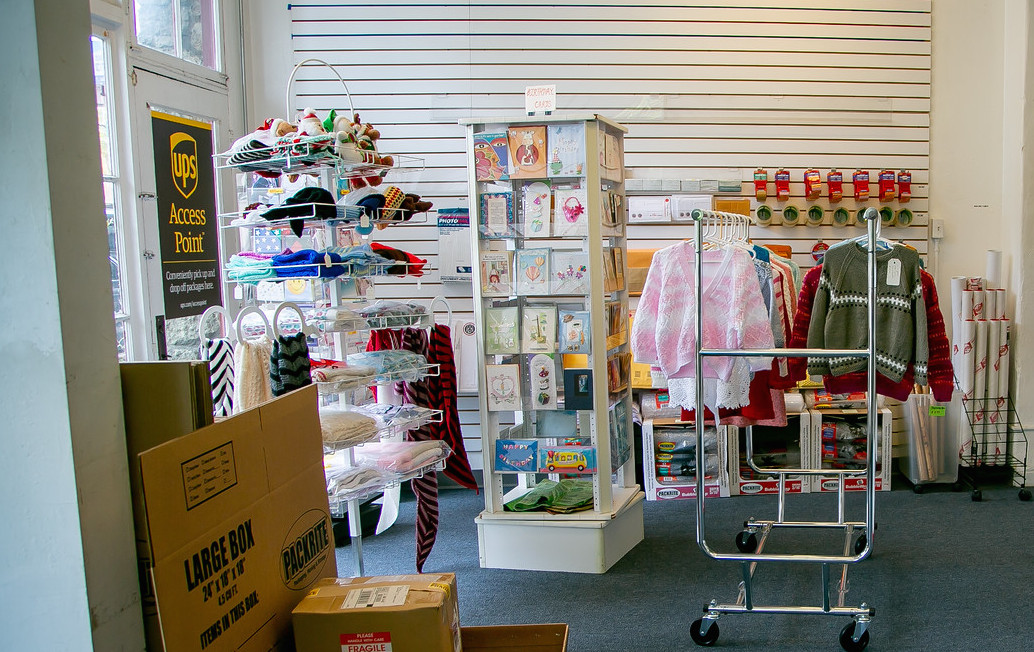 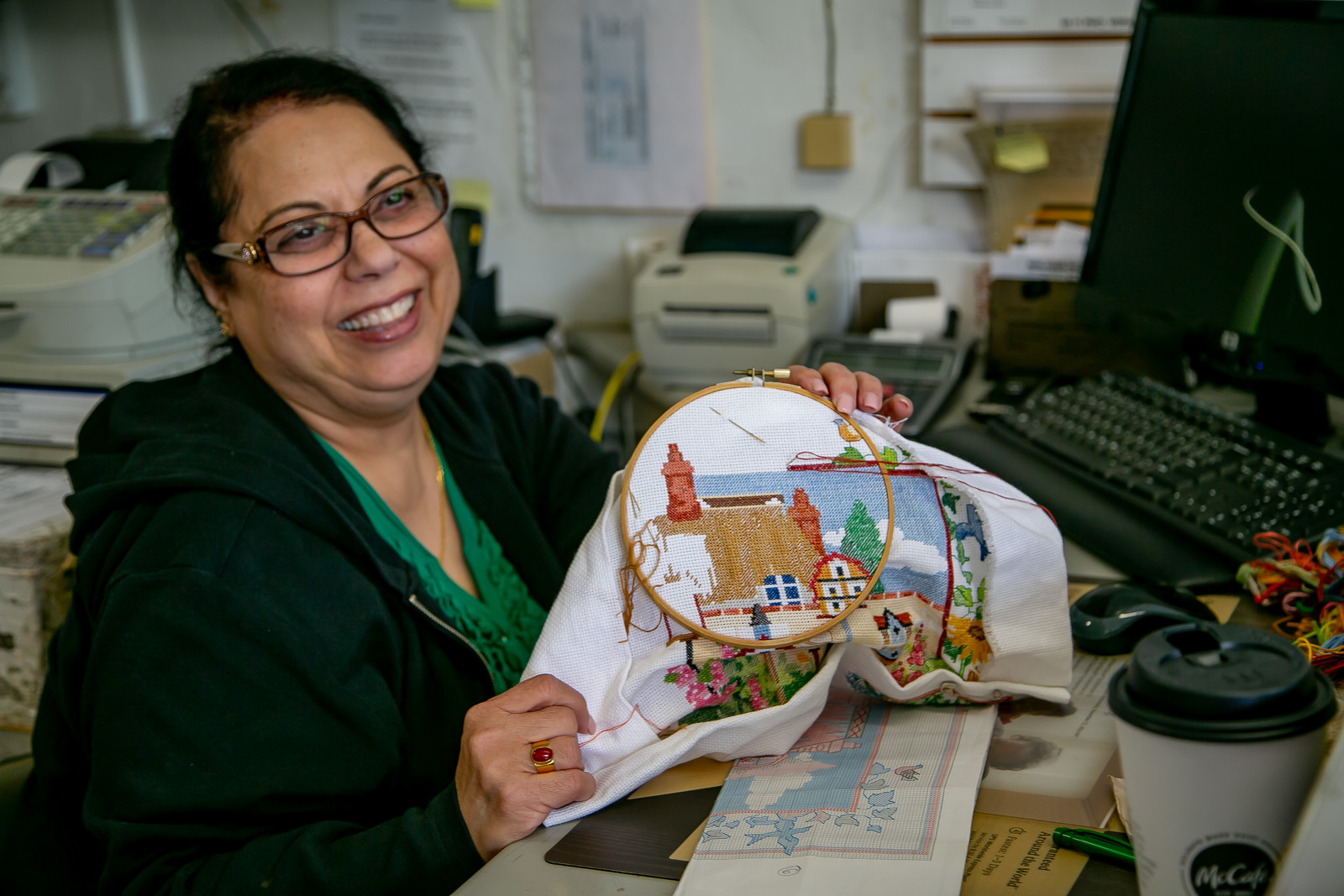 Now, a couple mailrooms that are without prestigious buildings, but with a definite pizazz on account of the amount of signage. 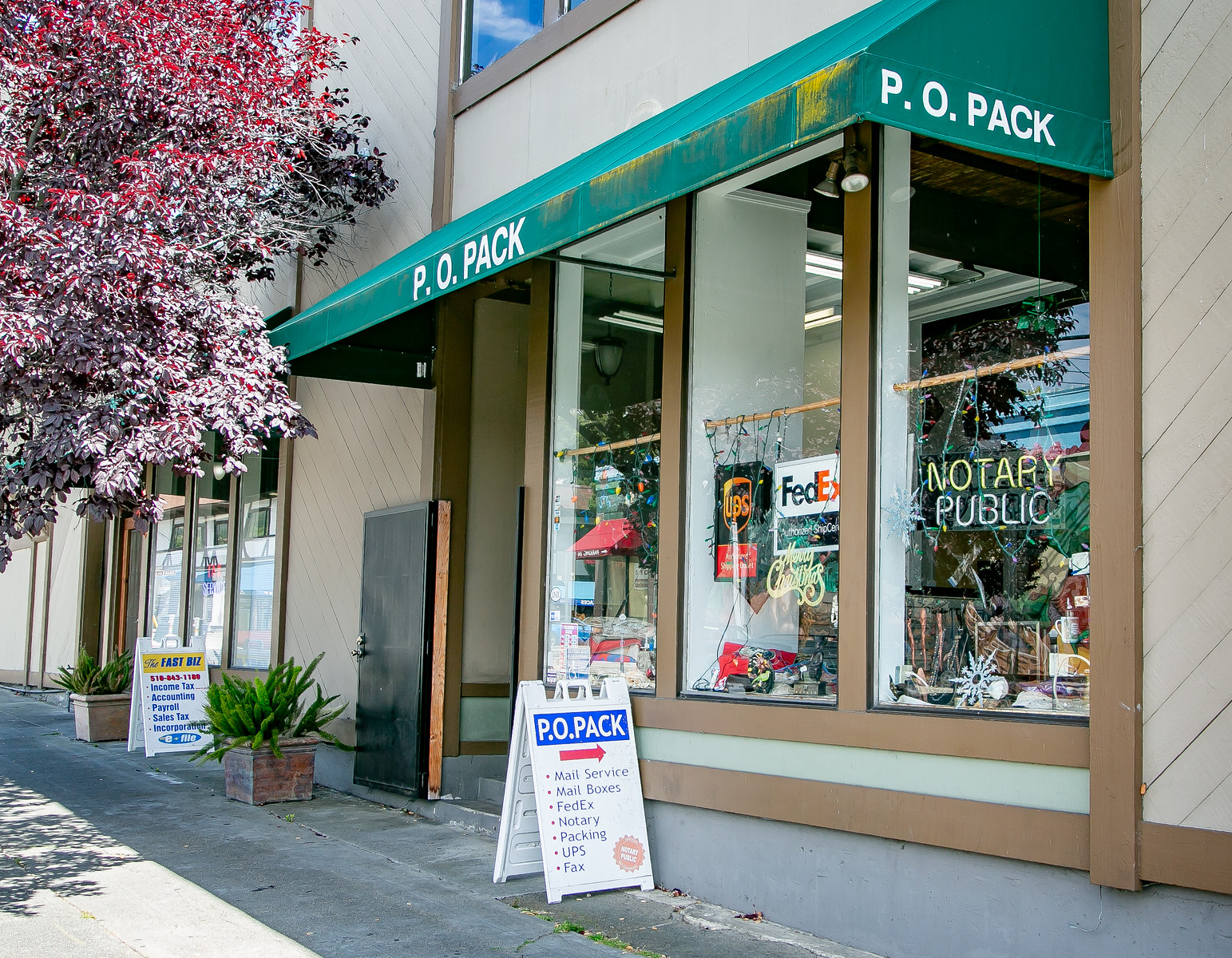 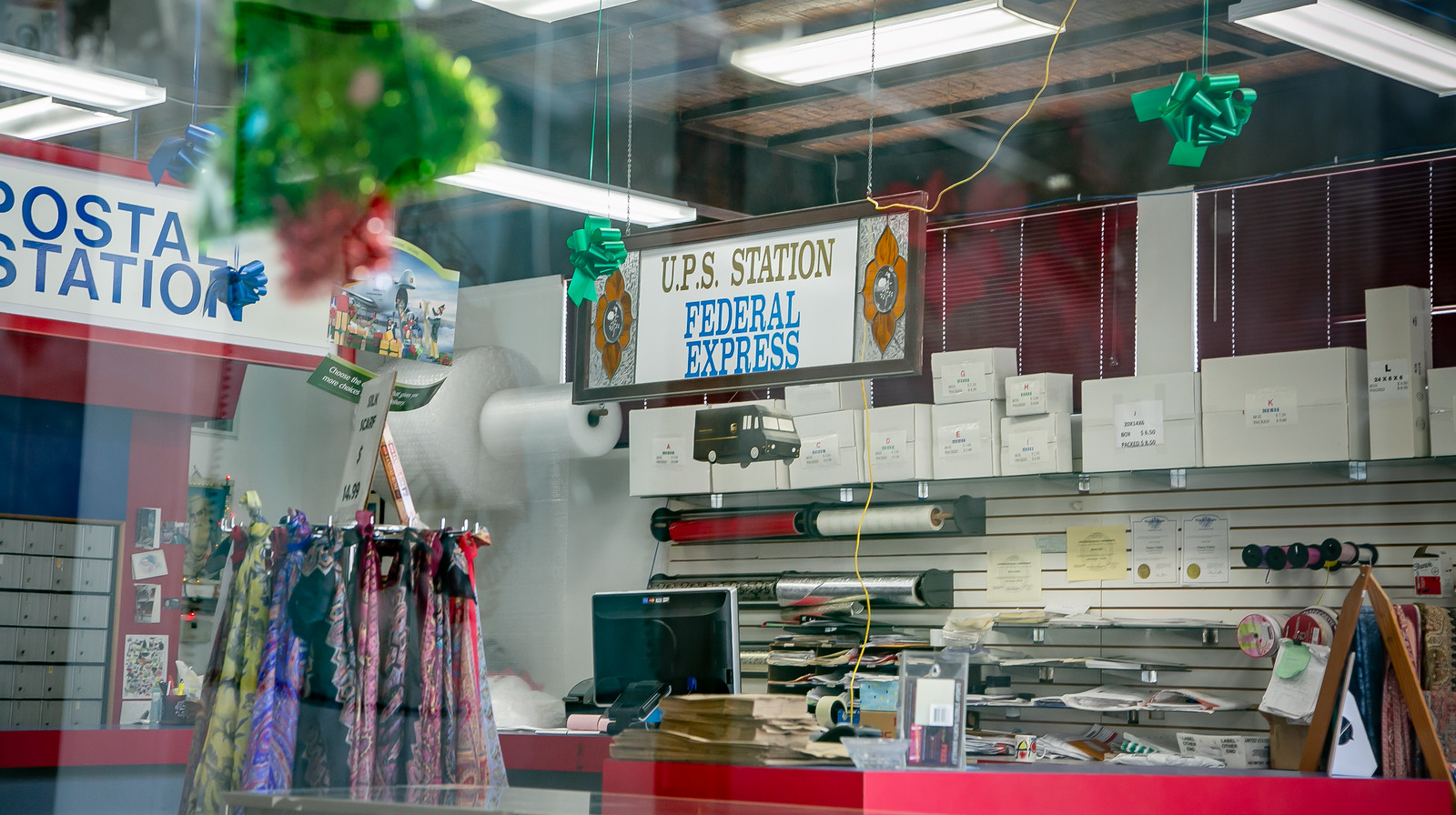 Busy!  Among their ancillary services are fingerprinting and live scanning.  No knitting though. 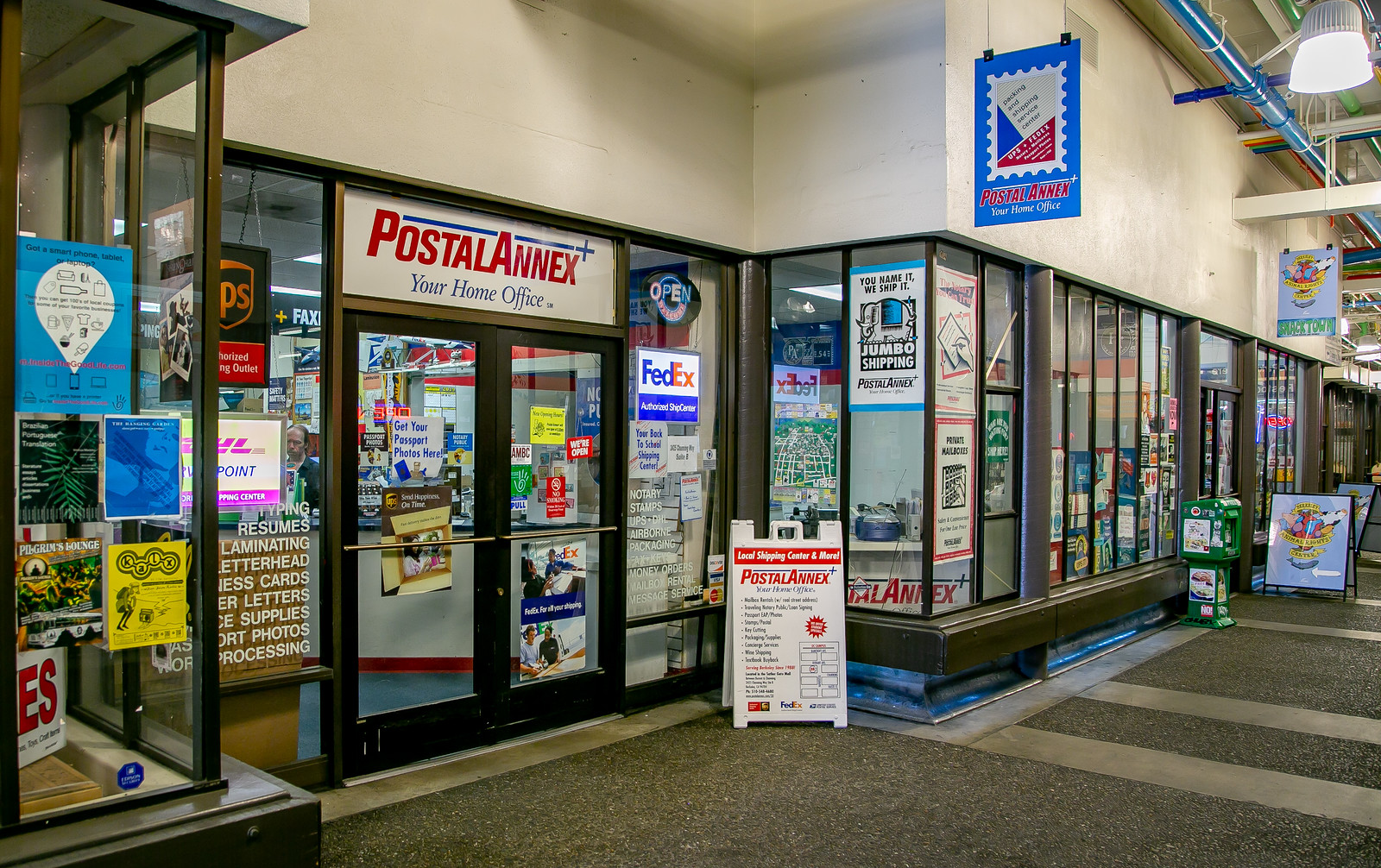 It might be me and the mood I’m in, but the surfeit of signage here at the Postal Annex makes me smile. 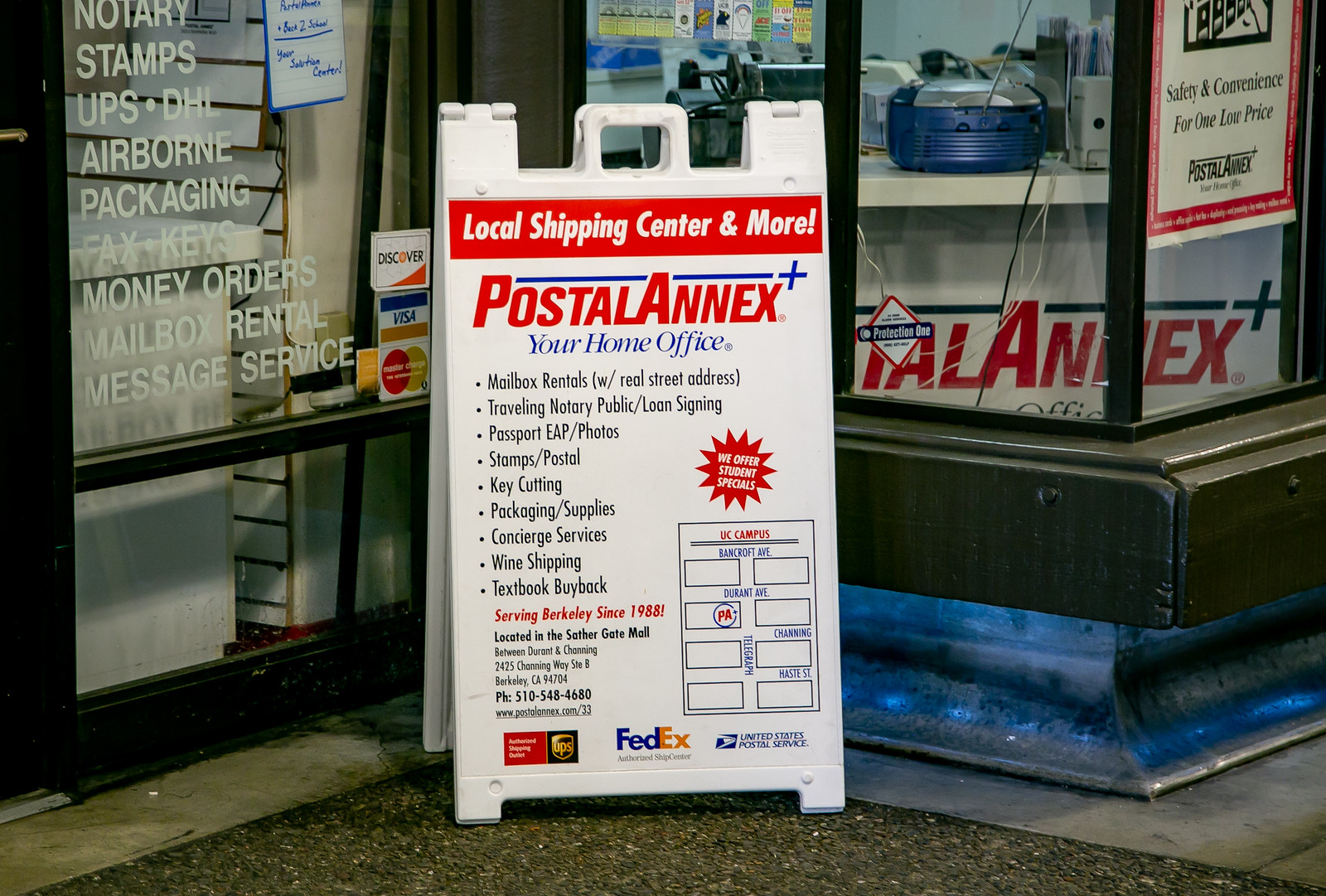 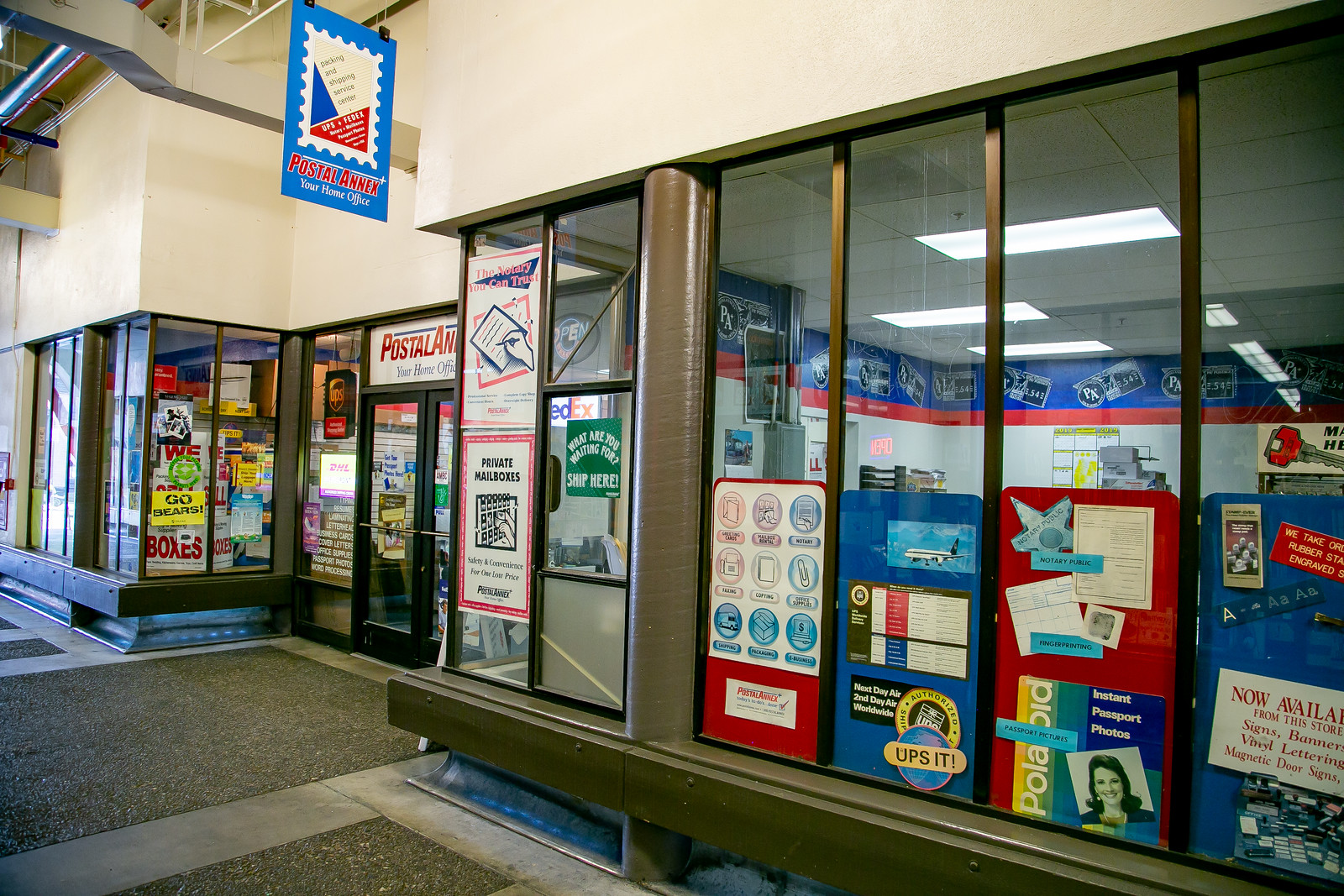 Last and not least is the official private mailbox business of Quirky Berkeley. 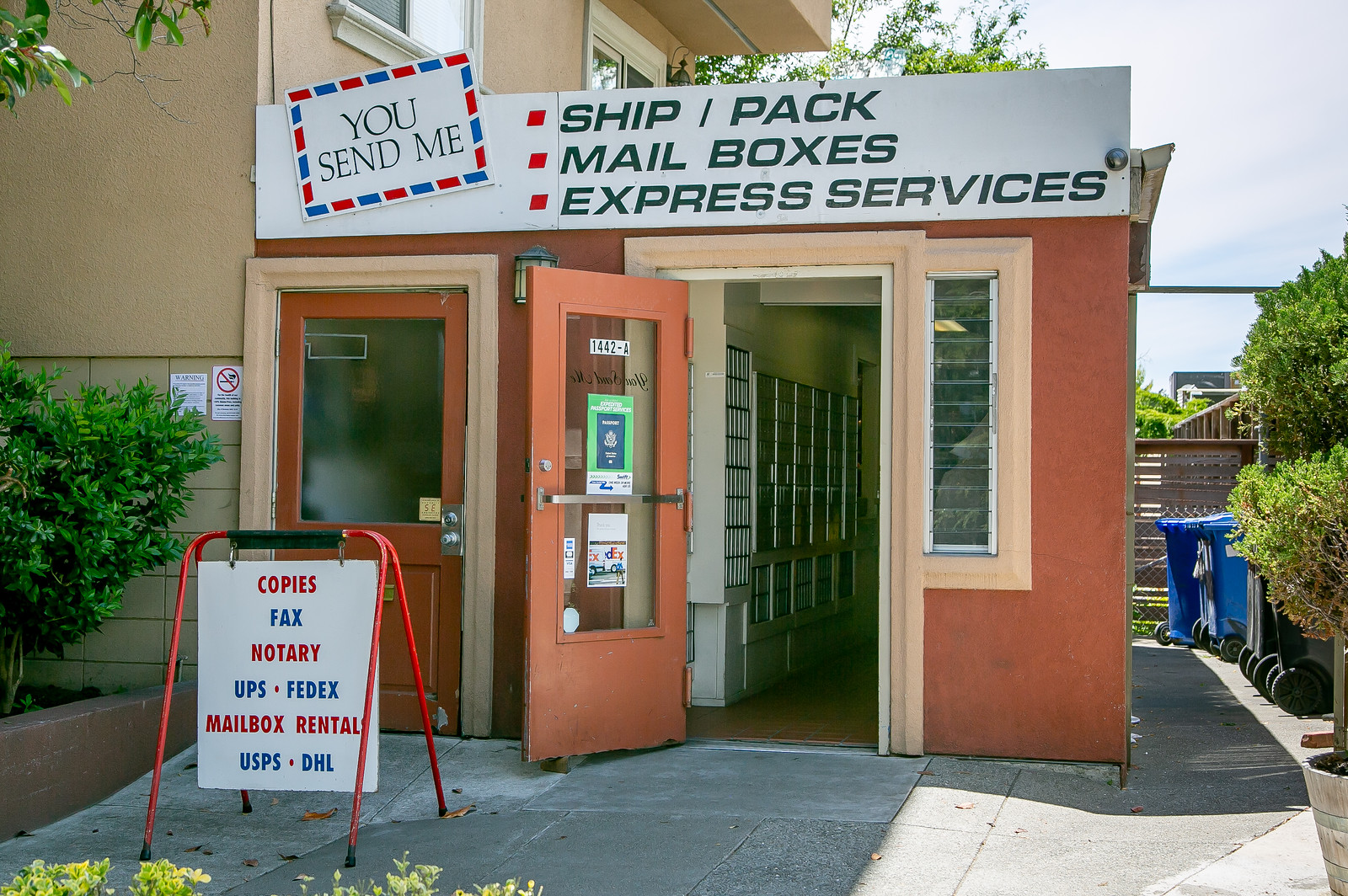 I ship there.  I notarize there.  I love it there.

The official name for the business that I am talking about is s “commercial mail receiving agency (CMRA).” A CMRA customer can receive mail and other deliveries at the street address of the CMRA rather than the customer’s own street address. Depending on the agreement between the customer and the CMRA, the CMRA can forward the mail to the customer or hold it for pickup. A CMRA operates independently of the national postal administration and is therefore able to receive courier packages or other non-mail.

In my book, there is something magical about notaries.  There is pomp in the procedure  – the book of signatures and thumb print and the embossed seal – that far outweighs the actual power wielded by a notary. 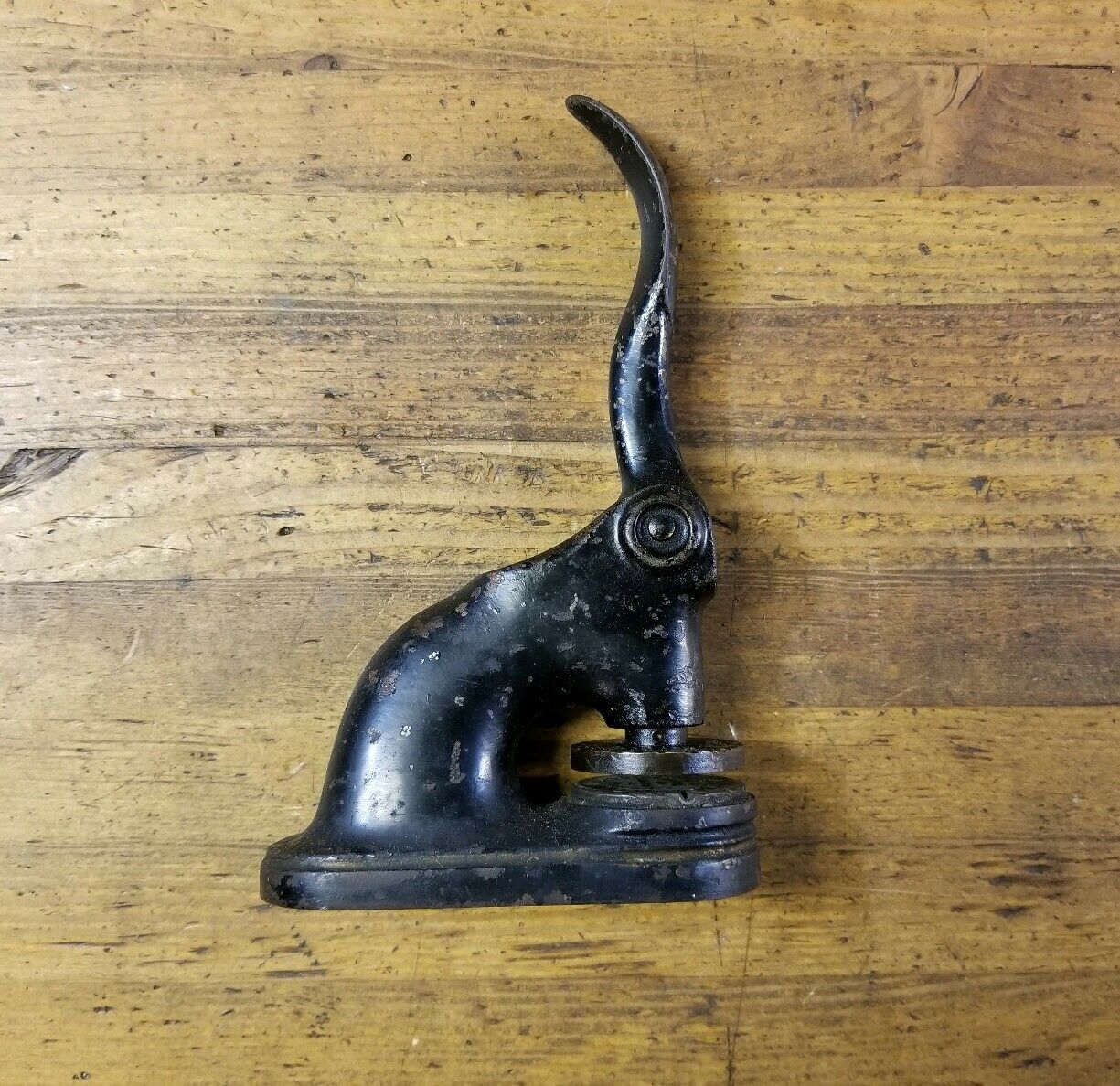 When I was working with the United Farm Workers, notary publics were a big deal in the Imperial Valley, just across the border from Mexicali with its notarios. 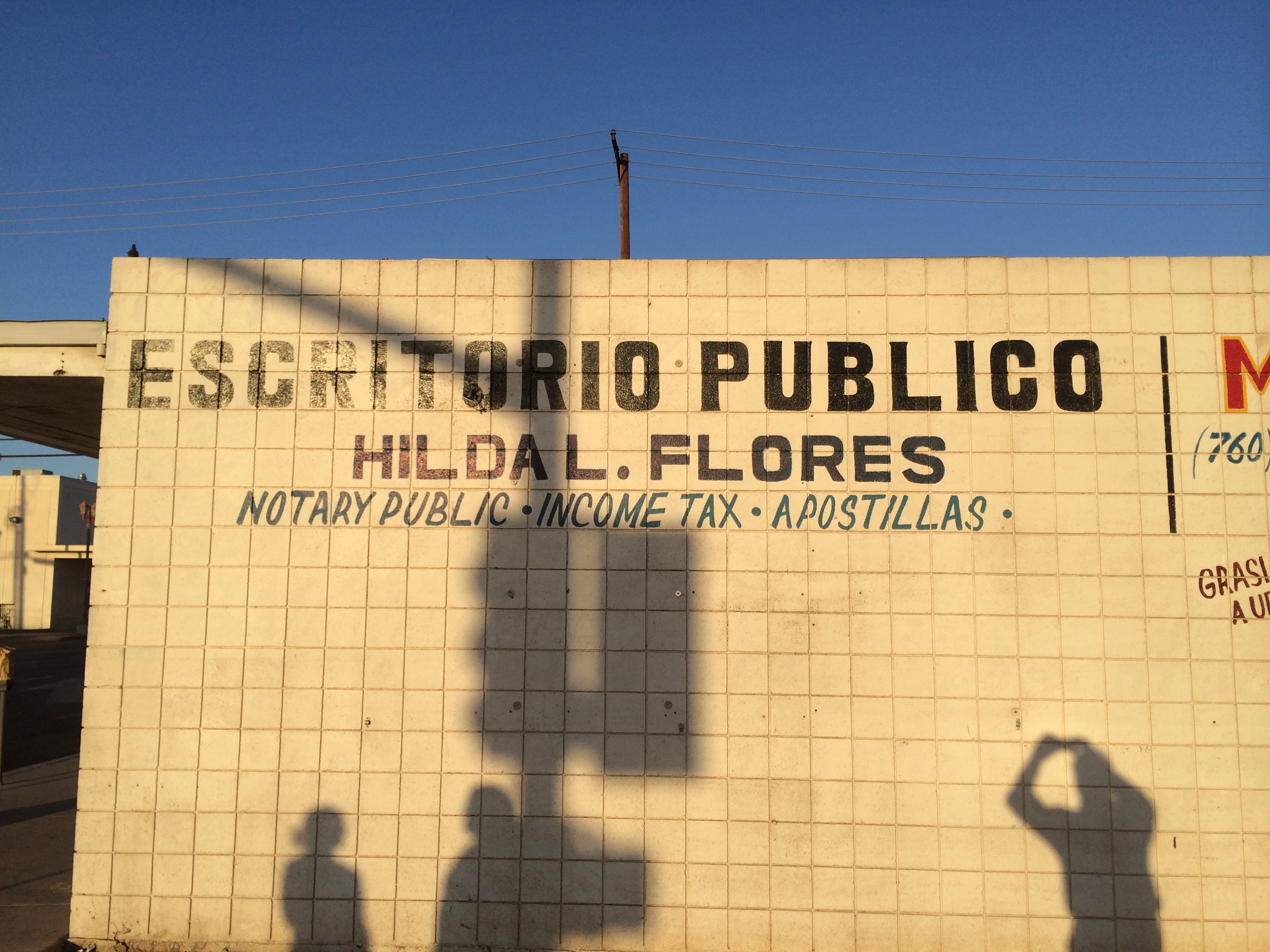 In almost every block of downtown Calexcio or El Centro or Brawley  you’d find a se-habla-espanol notario/escritorio.  They perform many basic services for immigrants, such as liaison with utilities, car payments, letter-writing, insurance, and more. 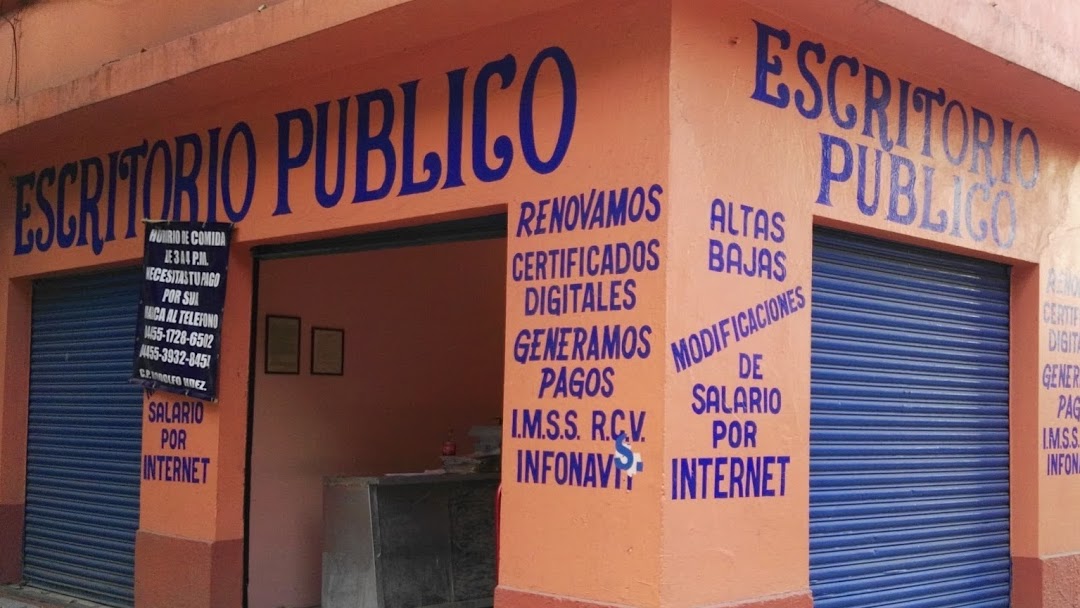 This photo is not from the Imperial Valley – but how could I possibly resist?  It is from  Iztapalapa, one of the Federal District of Mexico City’s 16 boroughs, located on the east side of the entity.  It is Mexico City’s most densely populated suburb.  More than a third of its people live in poverty.

I asked my friend to come for a glass of ice water and look at the draft post.

“Boy do I have something to show you” he said. 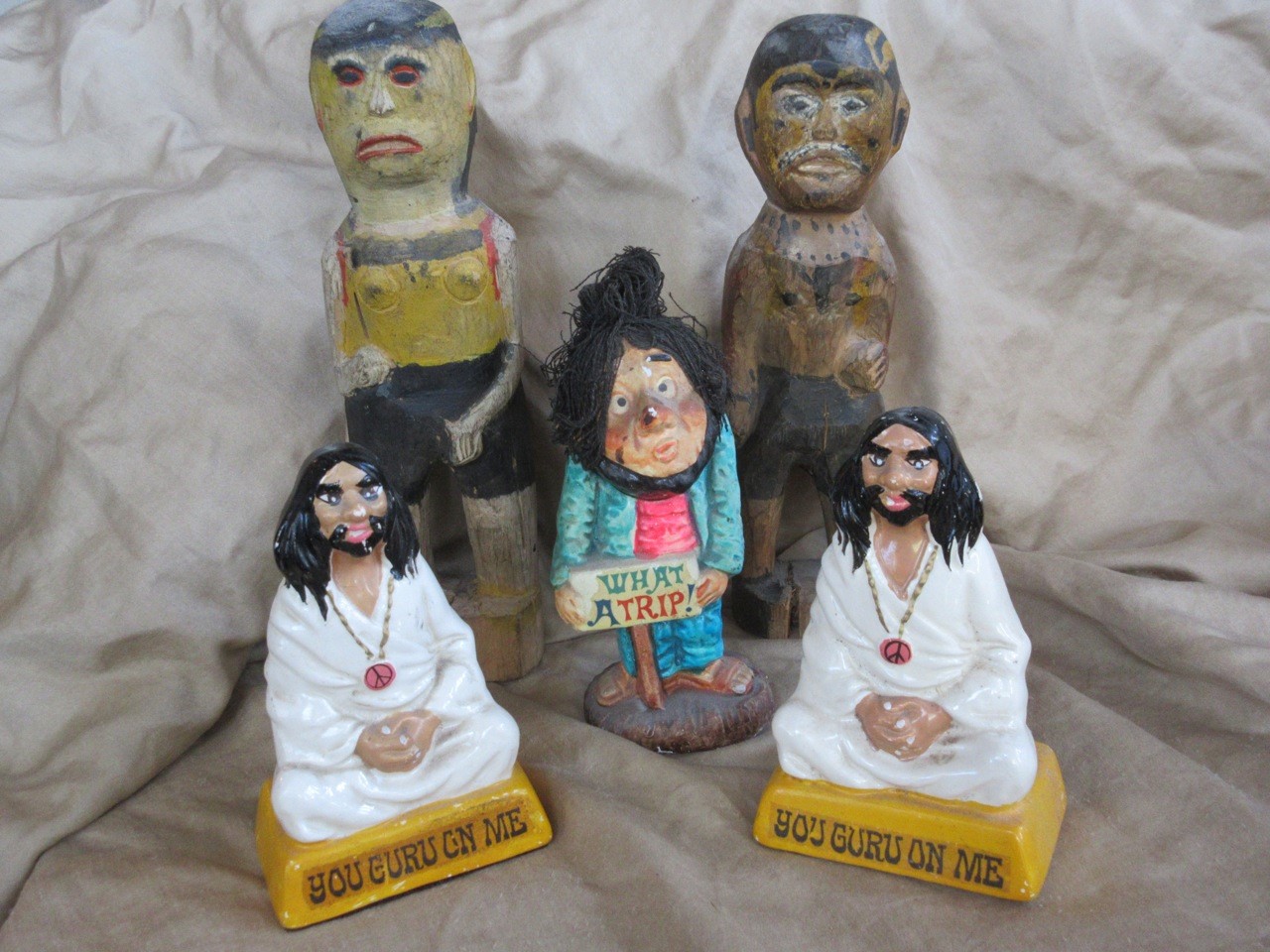 “Dude sent me this photo.”

I said I didn’t see the big deal – his twin Earl with a couple of friends. 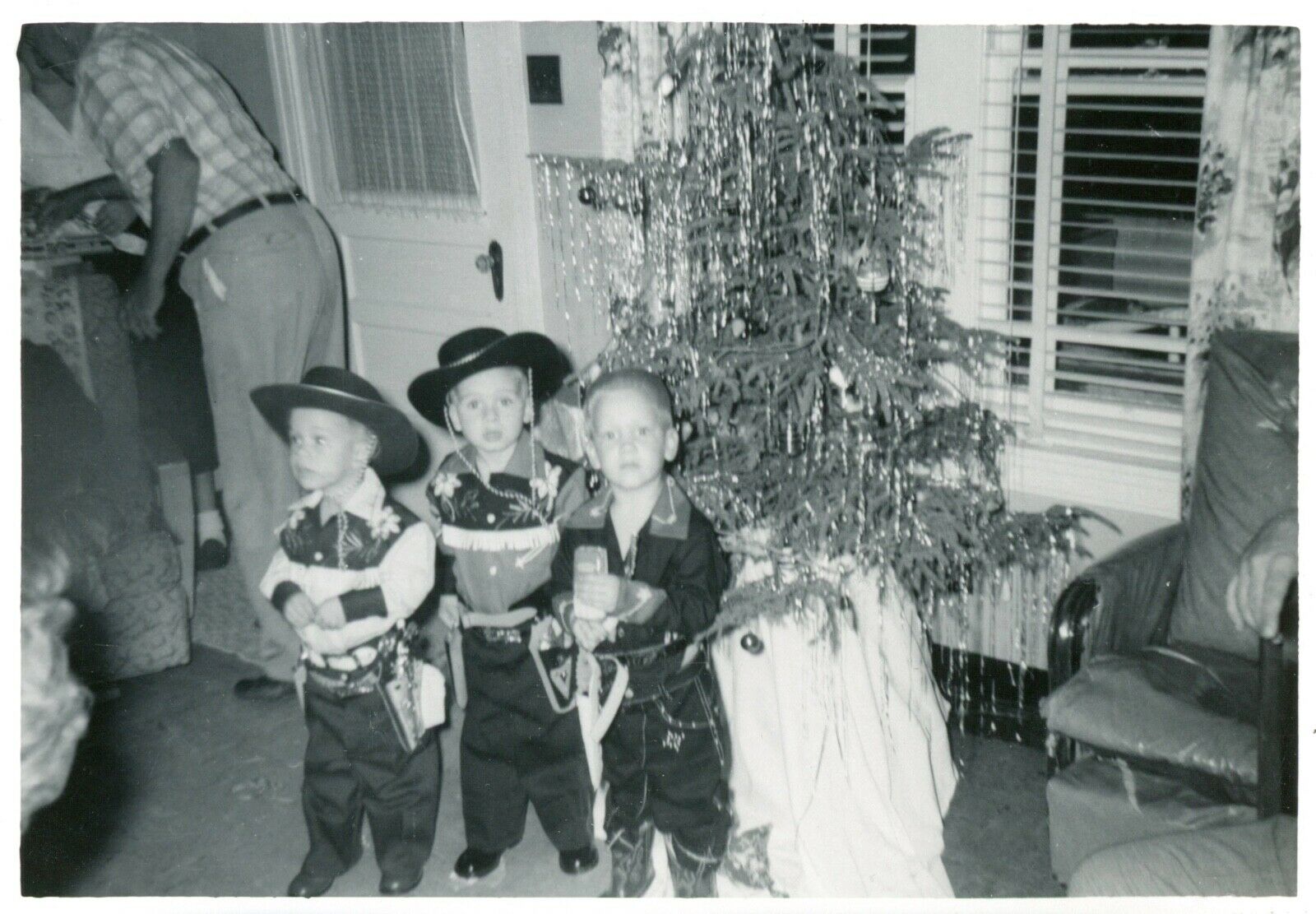 “Nope, not Earl.  When we were young, we were kind of close to our cousin named Duke.   At least we thought he was our cousin.  Like us he had a Norse god nickname – Ve.   Right after this Christmas photo our aunt and uncle moved to the Upper Peninsula with Duke and we never saw him again.  Weird.” 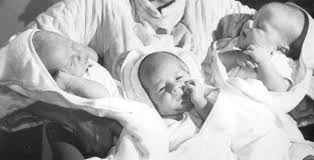 “When my mom was near the end of her life, Earl was helping her clear stuff out.  He found this photo of what looks like triplets.  He asked her and she gave it up – we were triplets not twins.  Triplets not twins!!!! When we were three our parents asked our aunt and uncle to raise Duke because he just didn’t fit in – that’s what she said – that and my aunt couldn’t have children.  There were three of us.  The kid we knew as our cousin, Duke, was our brother.  You can see the resemblance.  Earl is trying to track him down through through the friend who sent the photo.  This shit is weird.”

I agreed but regressed.  What did he think of the private mailbox post? 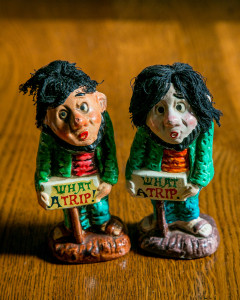 P.S. Quirky Berkeley says farewell to Jay’s Shoe Repair on Solano near the Oaks Theater.  It was a small shop, too good to last forever.  A loss. 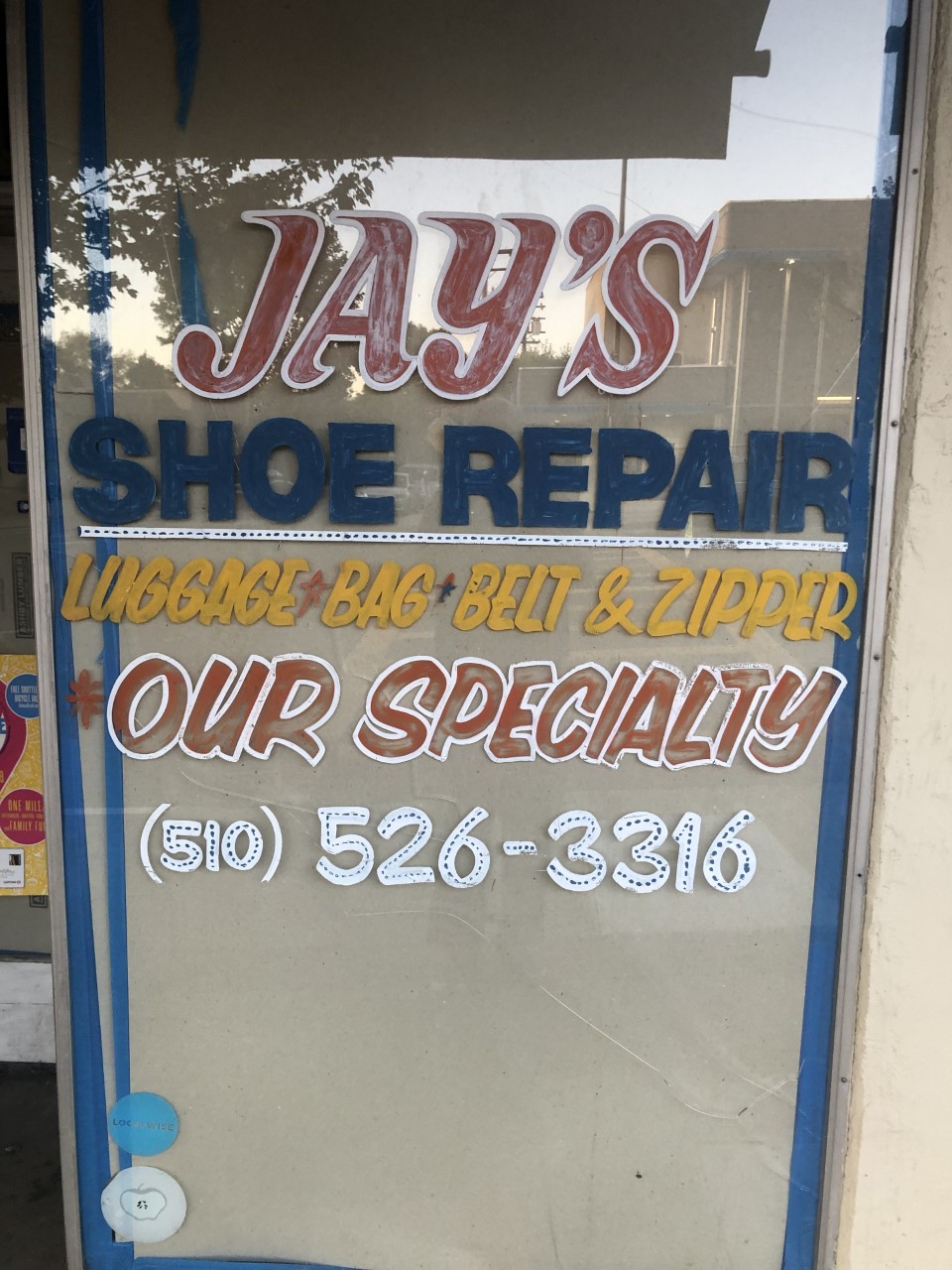