The words “quirky” and “Board of Regents” do not appear in the same sentence with any regularity. 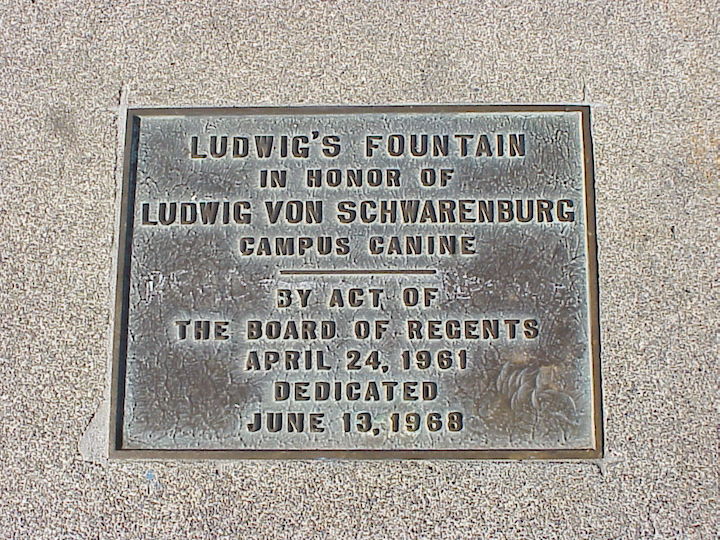 With Ludwig’s Fountain they do.

Between 1959 and 1965, John Littleford brought Ludwig to campus every day.  As John worked, Ludwig worked the crowd at the fountain between the Student Union Building and the Dining Commons opposite Sproul Hall.

Ludwig played in the water, accepted food offered him, and chased balls or frisbees if thrown.  At about 5:30 every evening Ludwig left the fountain and went home.

I have found several photos of Ludwig or at least purported to be of Ludwig: 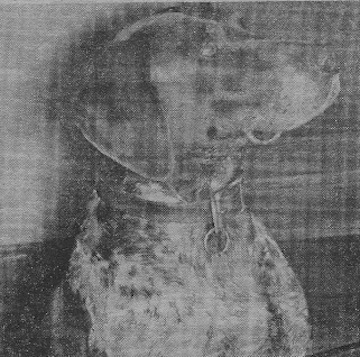 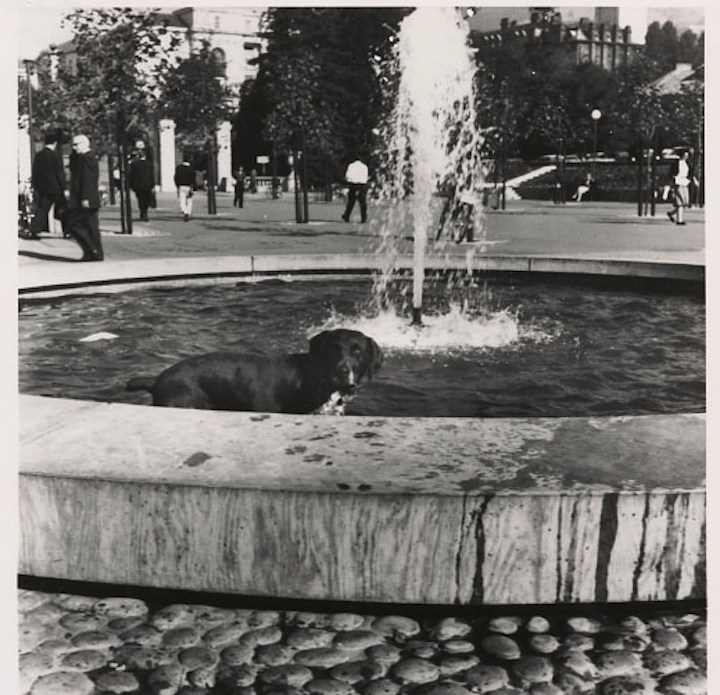 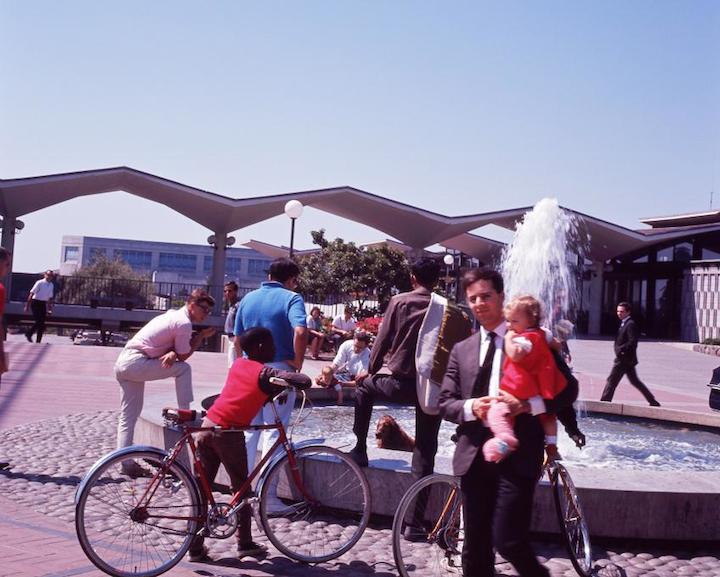 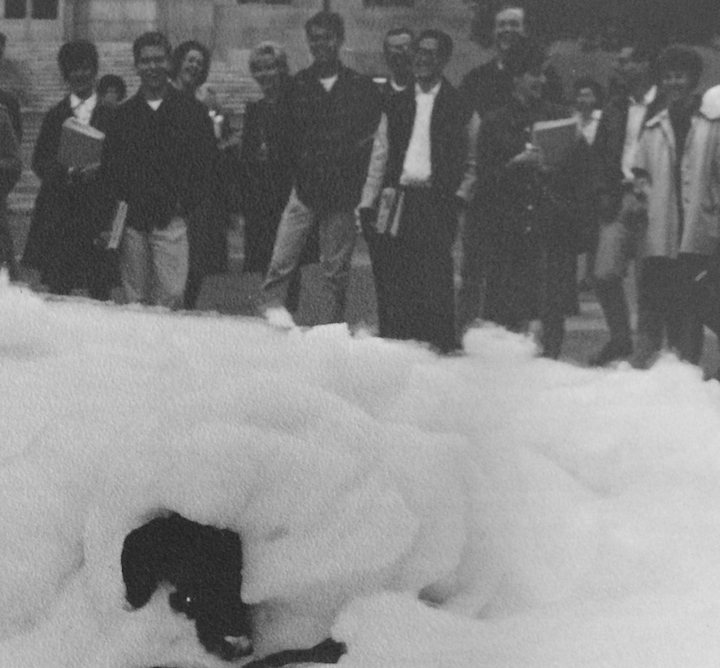 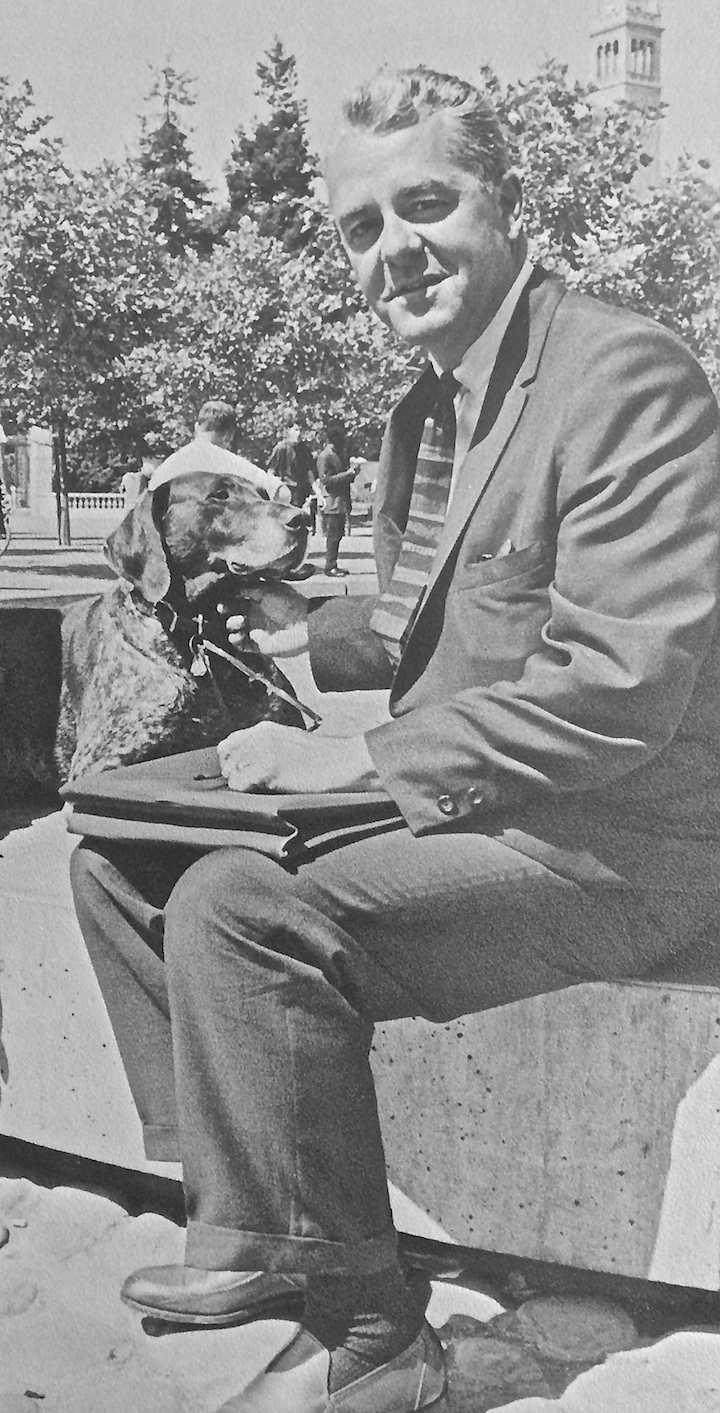 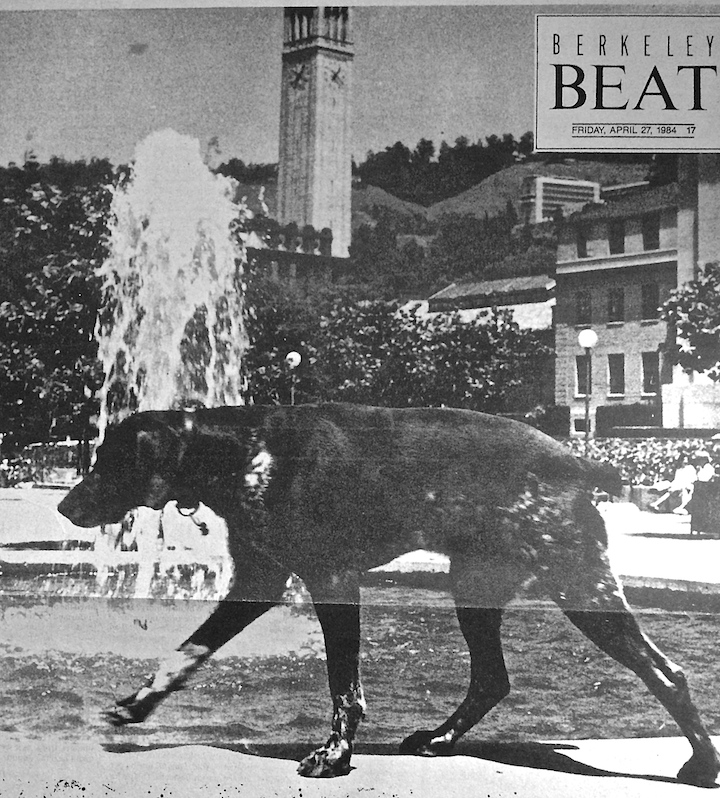 I am not sure about the color one, which suggests a Golden Retriever.  But it is a great photo from another time of the fountain and a dog.

In September 2015, Tom Stetler of Wilmington, North Carolina sent me two stunning Ludwig photos taken by his parents when they were students in Berkeley, one on a busy day, one on a slow day for Ludwig: 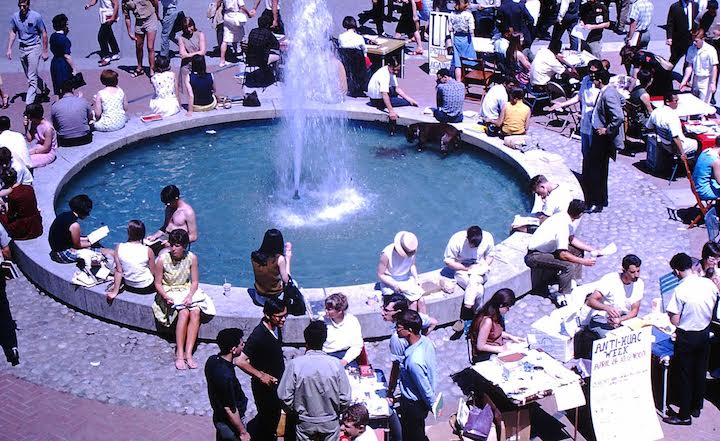 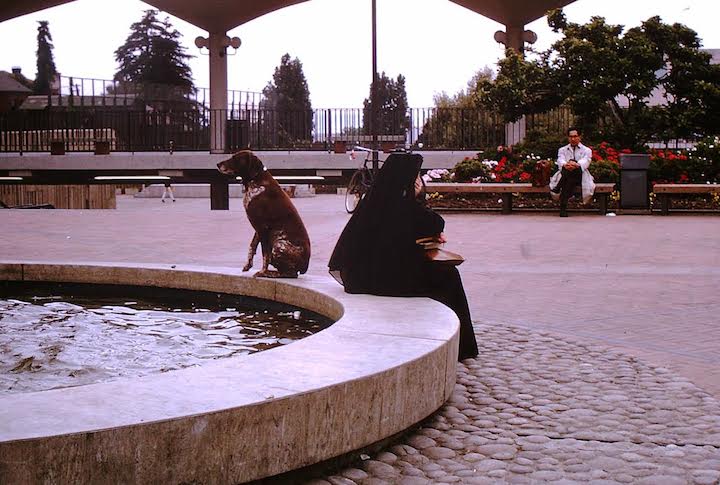 Plus – one photo that shows the fountain and mentions the dog in the caption above the photo: 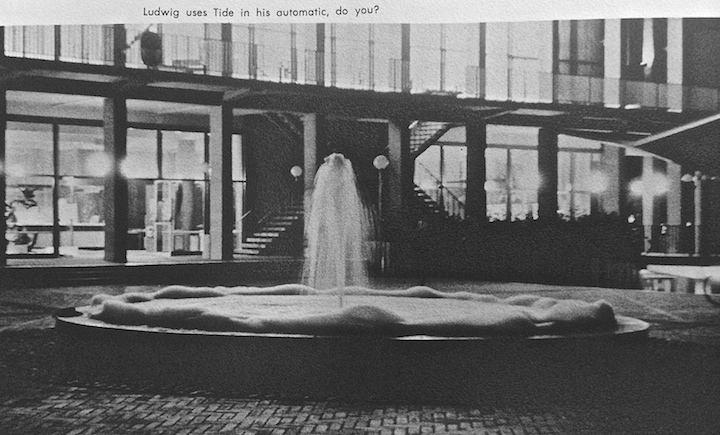 Robin Pemantle sent me this photo taken of him with Ludwig in the mid 1960s. 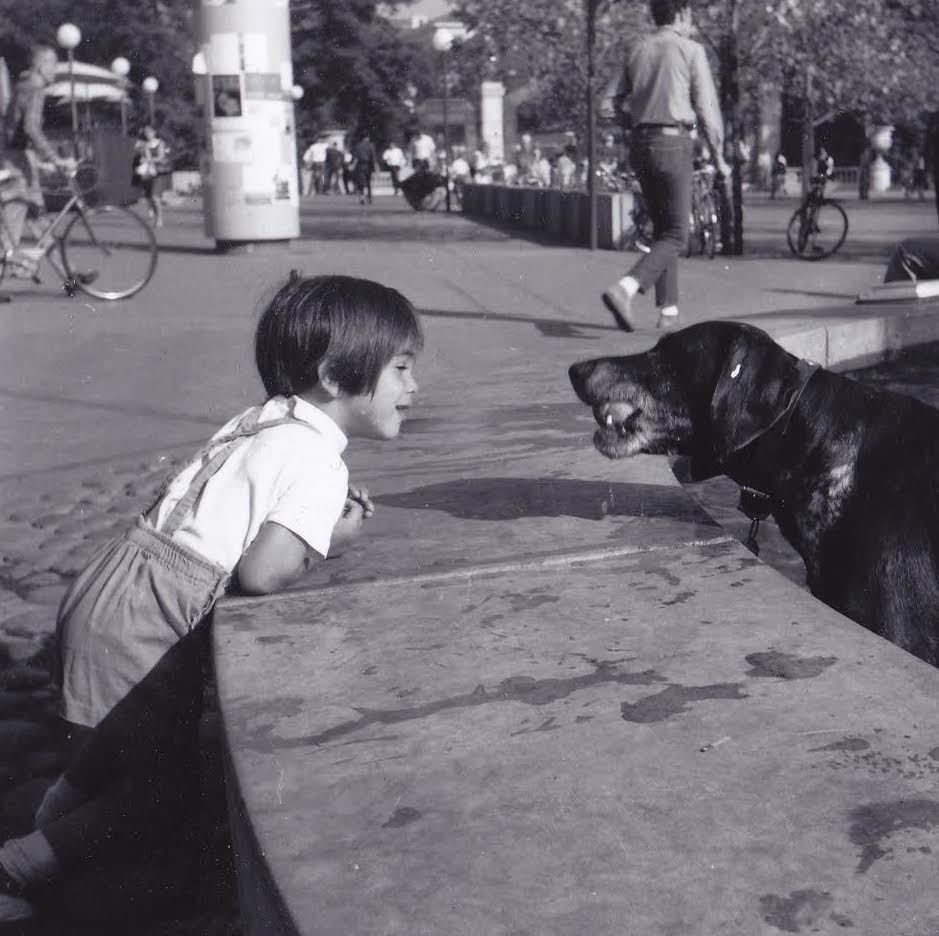 This is a photograph of staggering beauty.  Thanks Robin.

Plus a cameo appearance by Ludwig in a home movie shot by Mehrdad Etemad in 1962, in which Ludwig appears at 3:55 to have a dog follower as he inspects the suds in his fountain. 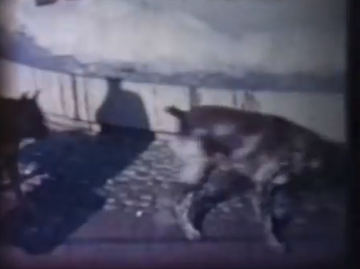 In 1961, which was still early in Ludwig’s career on Sproul Plaza, the Regents named the fountain after him.  The name stuck.  In his article about Berkeley activism in The Nation on September 27, 1965, Hunter Thompson wrote: “You hear the same talk on the streets, in coffee bars, on the walk near Ludwig’s Fountain in front of Sproul Hall, and in other houses where activists live and gather.”

I have seen a claim that Ludwig was part of the crowd during the Jack Weinberg police car occupation in Sproul Plaza on October 1, 1964.  Curt Mekemson wrote: “Someone had found a bullhorn and people were making speeches from the top of the police car while Jack sat inside. I situated myself on the edge of the fountain next to the Student Union and idly scratched the head of a German Short Haired Pointer named Ludwig while I listened.”

This photo, another sent me by Tom Stetler, shows Ludwig in his fountain during a FSM rally on Sproul. 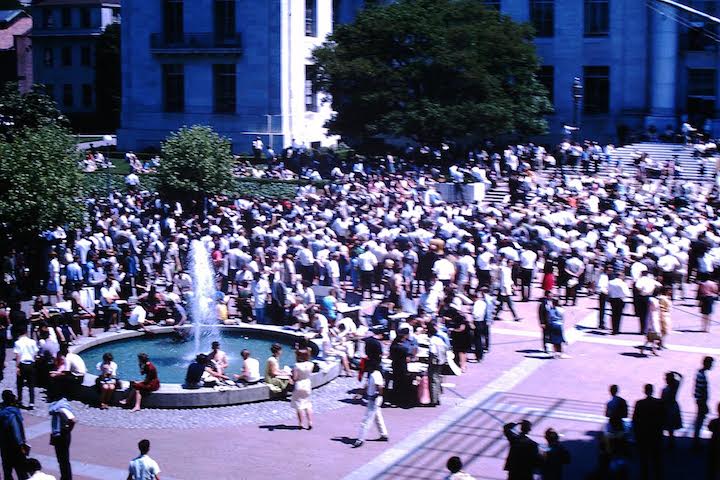 The photo is blurry, but there he is, our dog, the fountain, the rally, the plaza. 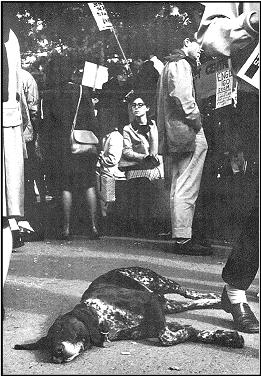 Ludwig napping during a FSM event. 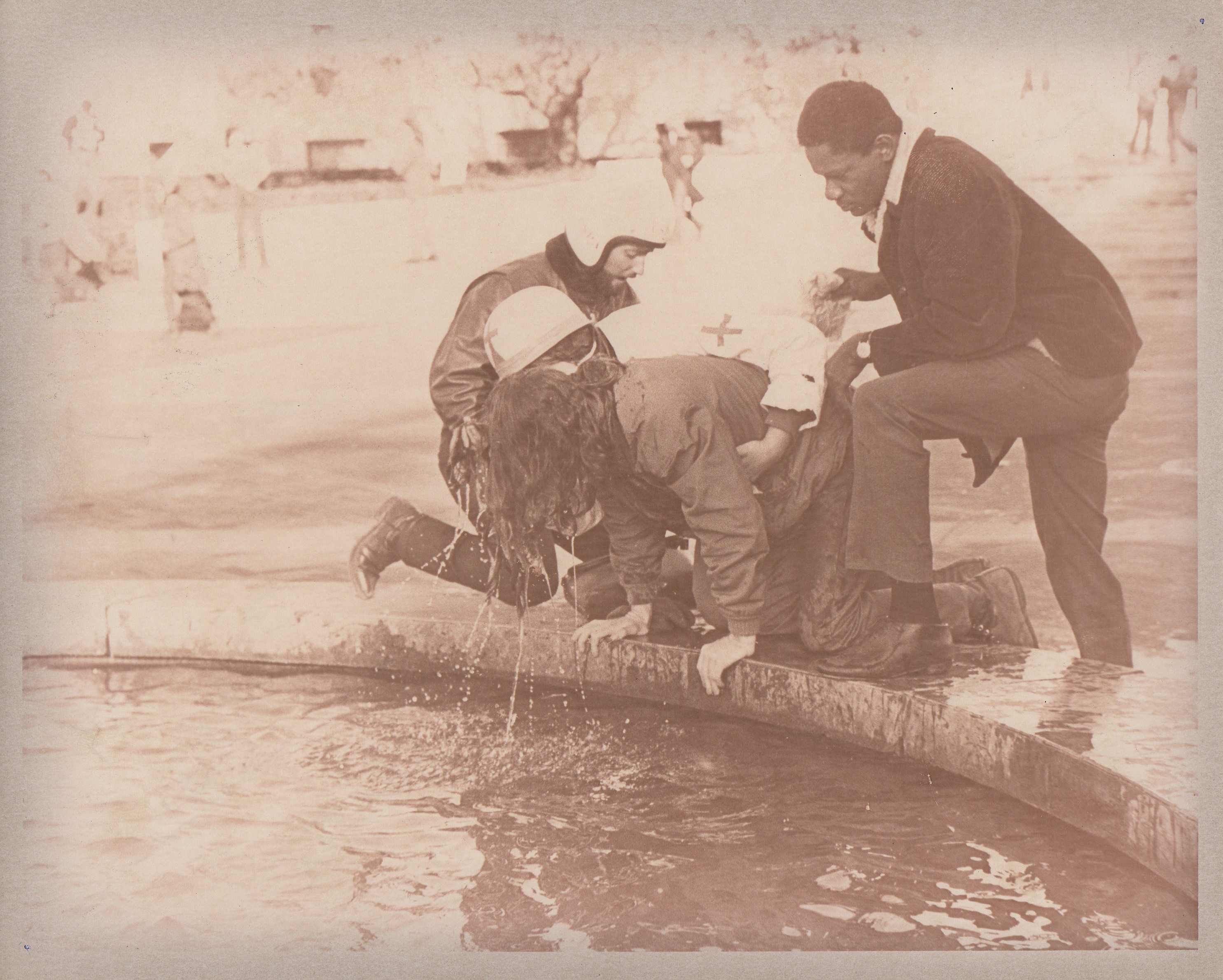 Five years after Free Speech was People’s Park.  Ludwig was no longer on the scene, but his fountain was.  Here students use the fountain water to rinse tear gas from their eyes.  Ludwig would have approved.

I have seen a claim in an Associated Press story of August 6, 1965, that Ludwig was almost elected student body head.  The Daily Californian of April 17, 1984, further reports that the committee supporting Ludwig for president of the student body (the Ad Hoc Committee for the Transcendentalization and Beautification of Student Government) campaigned for Ludwig arguing that his leadership would usher in an era “in which student government would at last be given the leadership, courage, and depth of vision it desperately needs.”    “I Like Ludwig” buttons were very popular on campus.

I have seen a claim by W.J. Rorabaugh in Berkeley at War that Ludwig was a faithful listener of Holy Hubert, who preached in Sproul Plaza.

John Littleford moved from Berkeley to Alameda in 1965, Ludwig’s time at the fountain ended.  The Associated Press story about Ludwig moving to Alameda was carried in papers throughout the United States.

In The Campus Guides: University of California Berkeley, we are told that Ludwig’s portrait was hung in the Student Union and the alumni magazine issued a proclamation naming Ludwig “Friend of the famous, hero of coeds, and acknowledged power behind the University.”  “Ludwig Day” was celebrated on September 18, 1965, at California Memorial Stadium when UC played Notre Dame.  Student body president Jerry Goldstein led the 70,000 fans in singing “Auld Lang Syne” to Ludwig.

An Alameda bank official in a letter to Ludwig said: “We would like to assure you that there is a very fine fountain in the center of Alameda. We would like you to try it out.”

Ludwig lived what Robinson Jeffers called a “good and joyful” life at the fountain.

Good for the Board of Regents for this touch of quirk.

I showed the photos to my friend.  Gabby had just sent him a second carton of Christian record albums.

My friend was fascinated by the albums but welcomed a return to the reality of Quirky Berkeley. He claims to have known Ludwig well.  He claims to have even visited Ludwig in Alameda after the Littlefords moved.  He knew exactly what he thought about Ludwig and Ludwig’s Fountain: