My father was born 100 years ago today, on May 16, 1916, in Germantown, Philadelphia, Pennsylvania.  We always called him Dick.  Never anything else. 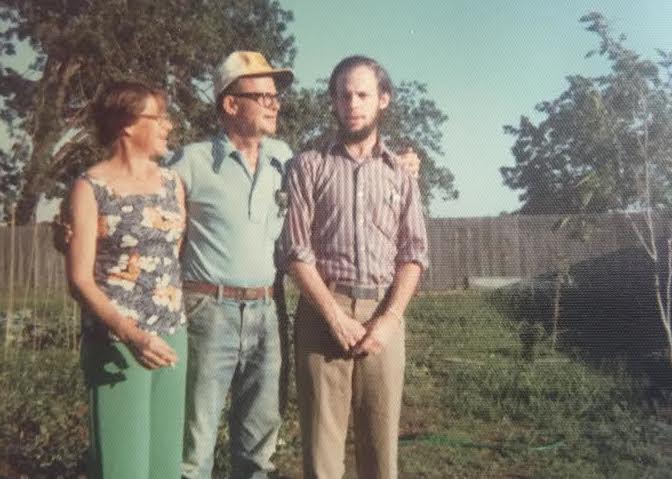 My mother was 57 in this photo.  The backyard was on its way to garden glory, which my mother sustained until she moved to Maine in 1994, 18 years later.

I was 24 in the photo. I was living in El Centro and studying for the Bar, which I would take and pass that summer.  Terrible beard!  A mistake of youth.

This would be my father’s last birthday. 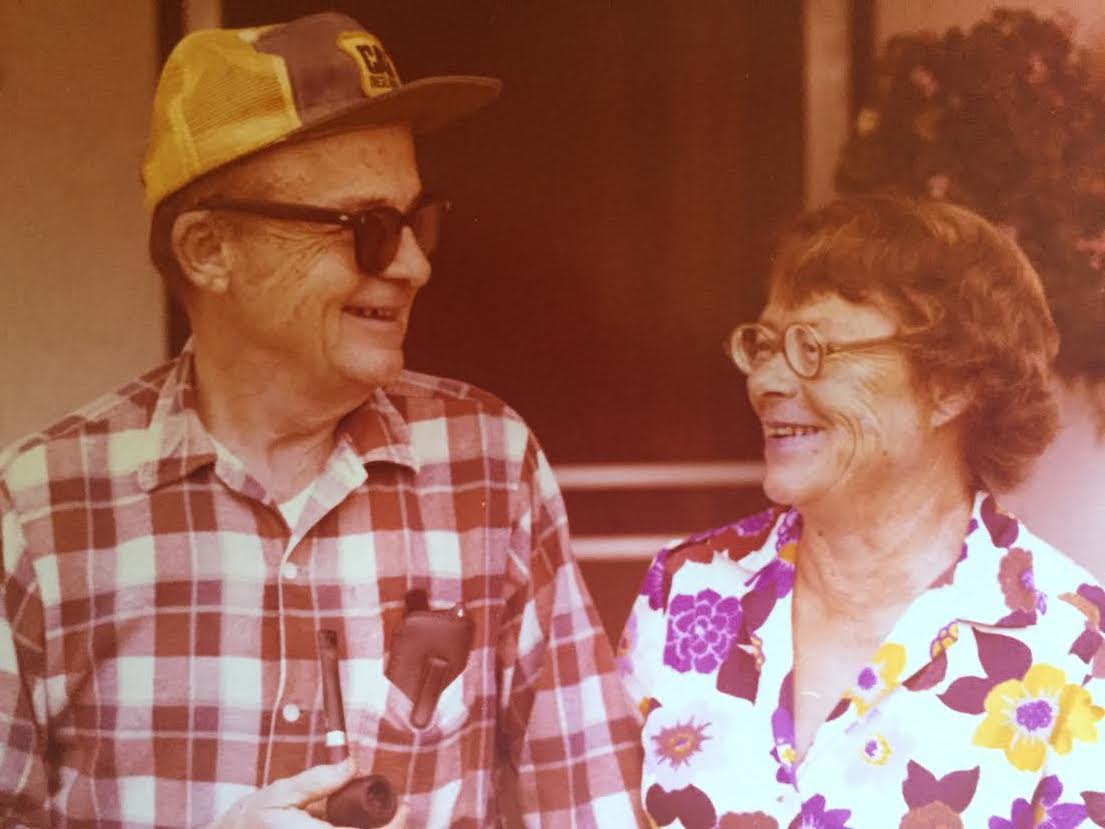 This is one of the last photos of my parents together, a few months after his birthday.

He had a heart attack in November 1976, came home from the hospital, and took up life.  He bought a tropical fish aquarium and shortwave radio. 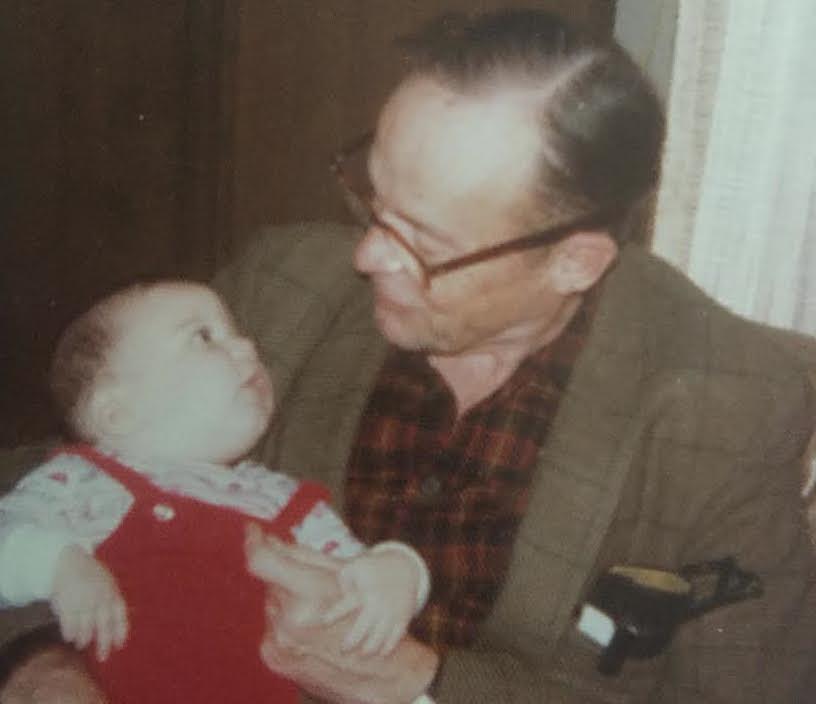 At Christmas, my sister Jeanne visited with her firstborn, Tony. 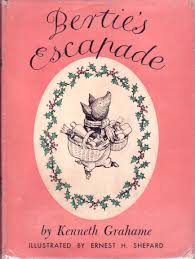 On Christmas Eve, my father read us Kenneth Graham’s Bertie’s Escapades as he had when we were children.  Halfway through he handed it to me and asked that I finish it.  I did.  After Christmas dinner I left Yuba City to return to my work with the UFW in the Imperial Valley.  That was the last time I saw him.

On January 6, 1977, he went for a walk with my sister and Tony.  A few blocks from home, near the Seedling Nursery, he pointed out some almonds still on an almond tree to my sister and then collapsed, probably dead before he hit the ground. 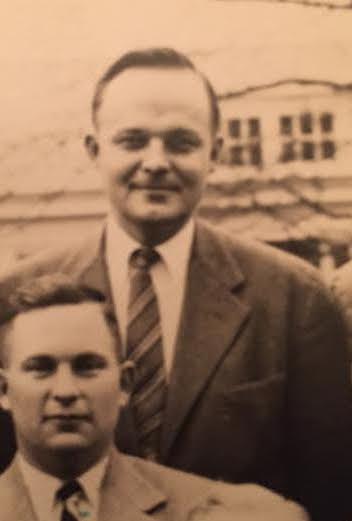 My father was a hard and serious worker. He was not able to go to college when he graduated from high school on account of his father had died and my father’s college savings were spent on a grave marker.  He went to night classes at the Wharton School, the University of Pennsylvania.  He was a self-made man.  His last job, as a management consultant, was with Ford, Bacon and Davis in New York.  He commuted from Bryn Mawr.  He provided well.

He was passionate about many things. 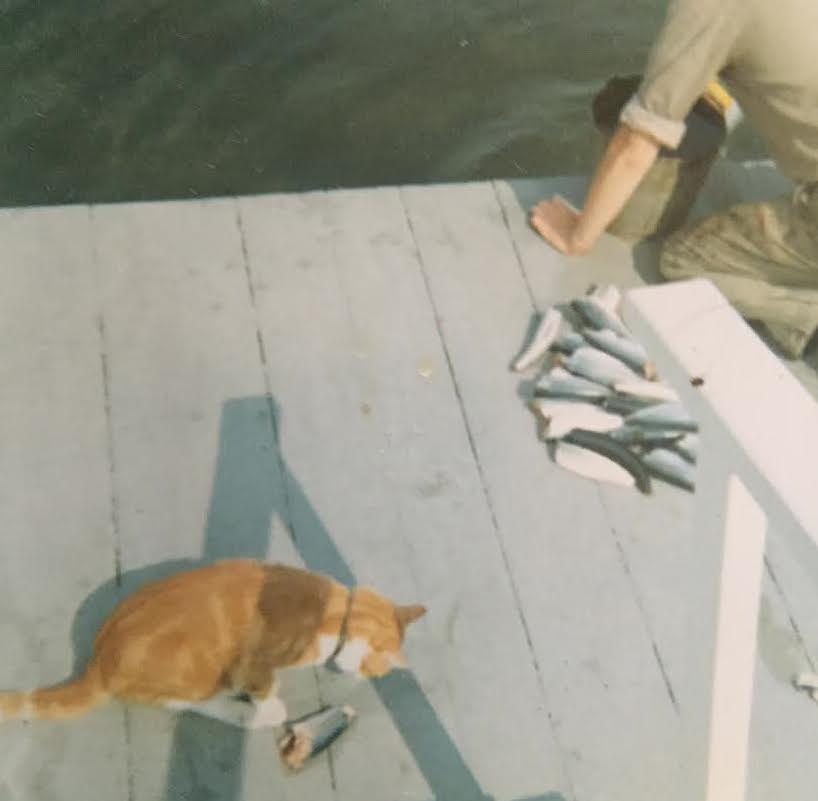 He loved to fish.  Our few weeks in Maine each summer were magical.  He fished every minute that he could. Flounder, cod, mackerel.  Our orange cat Brandy would greet him at the float when he came back from fishing, jump in the boat, and pick his fish.  My father and mother would dig clams in the mud flats.  Once a summer he got up wicked early and went out with a lobsterman.  He loved it.

My father salted a crock full of mackerel each summer and brought it home.  He would soak a few fillets each week to leach out the salt and then fry the mackerel for his Sunday breakfast.  Nobody else joined in on the salt mackerel.

As a boy he was a shortwave radio operator.  He kept a love for shortwave all his life.  In the few months before his death he had gotten a new shortwave radio and logged all that he heard.

He was a collector.  For many years he collected stamps.  He encouraged my boyhood collections – stamps and flat lead soldiers. 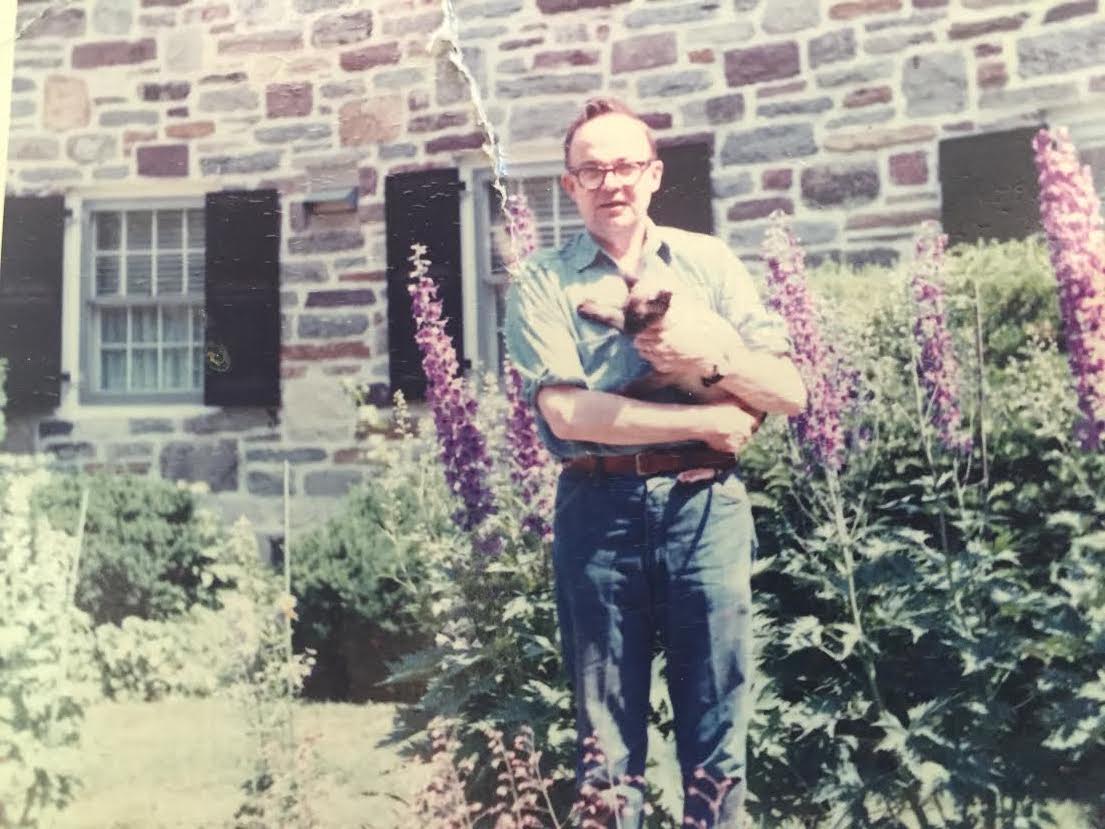 He loved, probably above all, to garden.  He built greenhouses and grew orchids.  He loved delphiniums and dinner-plate dahlias and chrysanthemums.  He loved vegetable gardening the most.  His favorite Christmas present was the new Burpee Seeds catalog.  He planned his garden new each year, starting in the winter.  When it was warm enough to plant he spent every minute he could after work and on weekends in the garden. I remember his pride in his lima beans. I remember walking through the snow on Christmas in 1974 to cut the last of the Brussels sprouts in his garden at Haverford College.

Stewed tomatoes on a slice of thin white Pepperidge Farm bread – it was heaven to him.

For some years he threw himself into HO-gauge model railroads.  He had  a big layout in our basement, really elaborate. 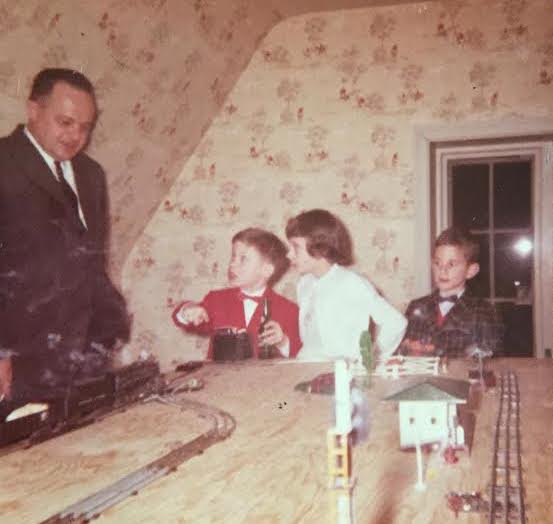 My father, me, my cousin Big Jean, my cousin Jay at the Lippincott house, 306 Laurel Lane, Haverford

He built a train table (American Flyer) for my cousins Jean and Jay as a surprise Christmas present in 1957 or 1958. 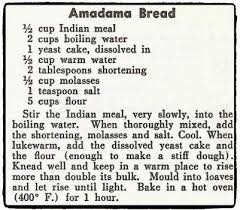 He was a good cook.  He loved baking bread, especially anadama. He built a rising box for dough.  He cooked Sunday breakfast (pancakes, omelets, studentenfutter) and steaks on a little Hibachi grill on our front porch on Sunday nights. He would stand with the grill on the coldest winter nights, smoking a pipe, with our orange cat Brandy.

He loved a martini.

For a few summers he was enamored with pistol shooting and reloading his own ammunition.  This was a Maine activity, with John Gay.  About the same time he embraced camping.  He made camping boxes.  We were all about camping for a few summers. 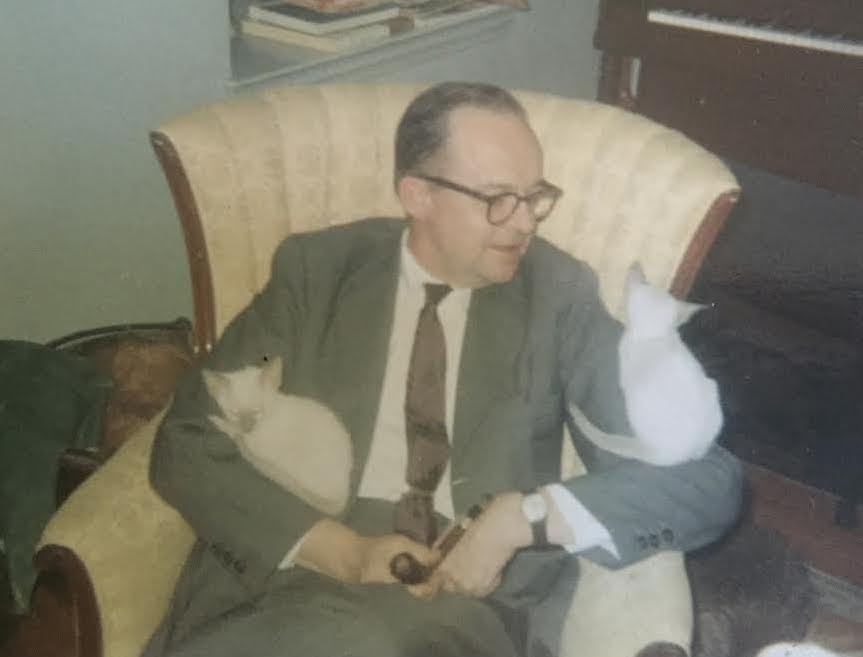 He loved cats and dogs, a lot. 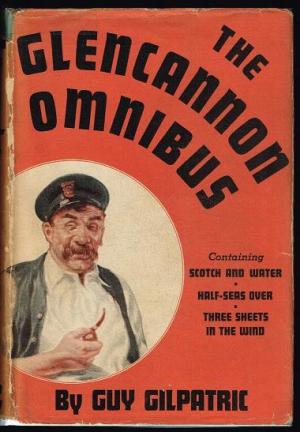 He loved to laugh.  Phil Silvers and Jackie Gleason made him laugh.  As a family we sat in the living room and listened to comedy albums – Nichols and May, Bob Newhart, Bill Cosby, the Smothers Brothers, Eddie Russell.  Guy Gilpatric’s Glencannon stories made him laugh out loud.  Ludwig Bemelmans and Archy and Mehitabel made him laugh.  I have those books. 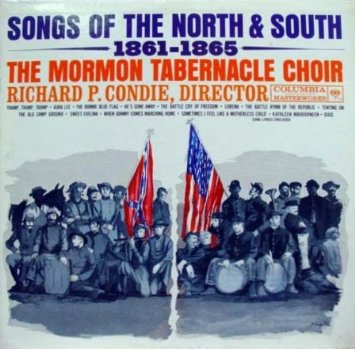 I only saw him cry once.  He was listening to the Mormon Tabernacle Choir singing songs from the Civil War, not long after his mother died in 1962. 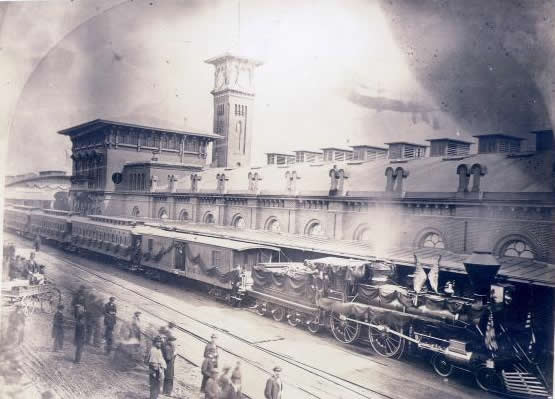 The songs evoked his childhood, his parents, his grandmother who as a little girl saw Abraham Lincoln’s funeral train pass through Philadelphia.  He was not a sentimental man.  He hated organized religion.  But the Civil War songs made him cry.

He had no brothers or sisters.  My mother died in 1998.  Two of my father’s three children are alive. 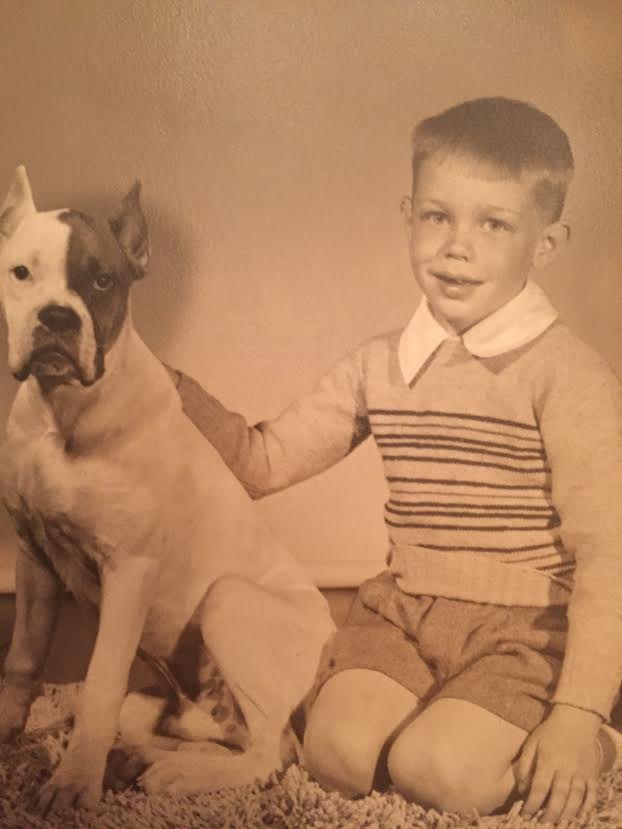 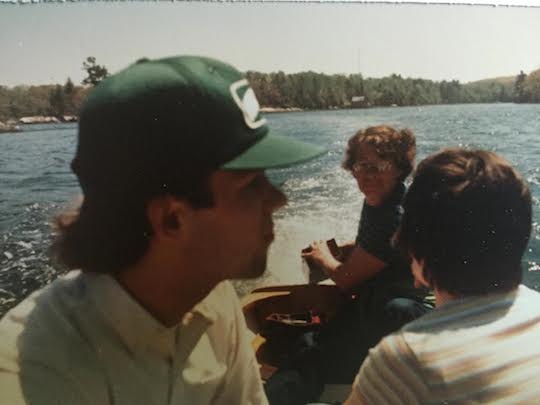 In the summer of 1977 we scattered my father’s ashes in John’s Bay, just outside South Bristol, Maine.  He loved fishing there – mackerel – out near Witch Island.  And then 21 years later my sister and I scattered my mother’s ashes there.  Sally Gay’s ashes are there too.  She died in 2005.  I don’t know where John Gay’s ashes are. 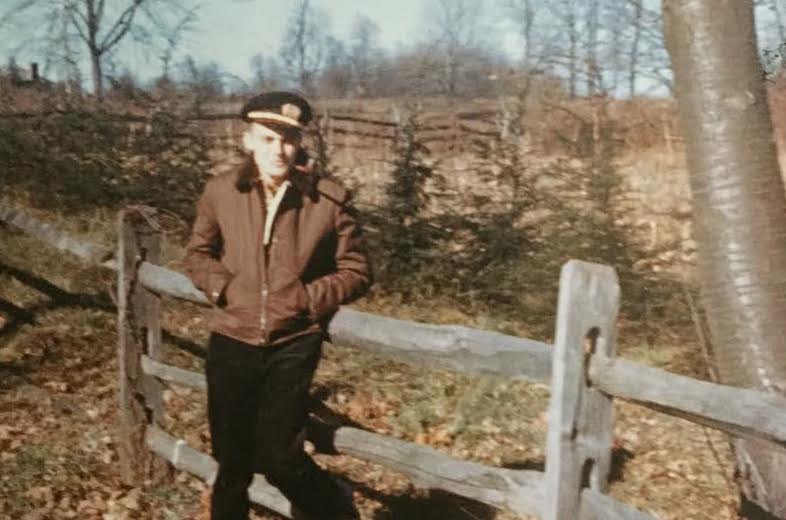 My father loved my mother.  This photo is before me, just after they bought a farm on Goshen Road in Newtown Square.  He is wearing his Merchant Marines jacket.  Life was in front of him.  They had a white boxer named Teenie (shown in the photo with my brother above) and two cats and chickens. 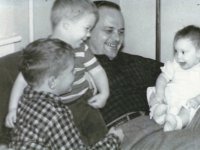 He loved my sister, the baby in this photo.  He was one for nicknames. 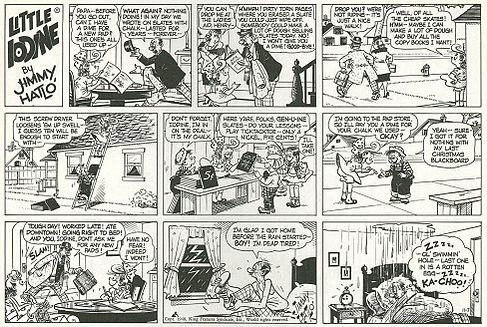 My sister was “Little Iodine.” 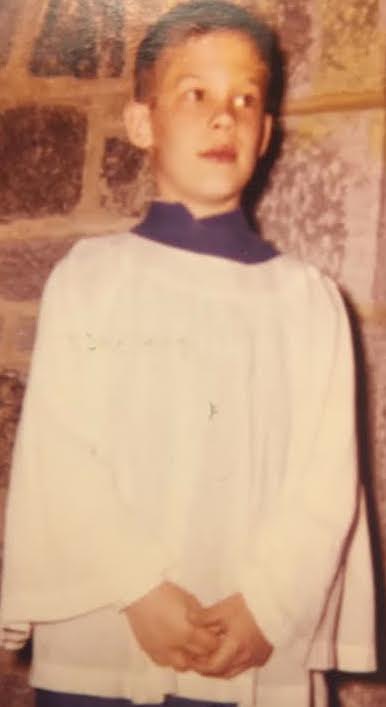 I was “The Priestling.”  Go figure!  He was “Uncle Lushwell.”  His nickname for himself.

When I was 10 or 11, my mother encouraged my father to play catch with me.  This was not his strong suit.  He tried.  He threw awkwardly, caught awkwardly, but he did it.  I flinch thinking of that.  He tried.

In the summer of 1969 we commuted into Philadelphia together, leaving home before 6:00.  I dropped him at the North Philadelphia Pennsylvania Railroad Station where he caught a train to New York.  I continued on to my job at the Ladybug warehouse in northeast Philadelphia. 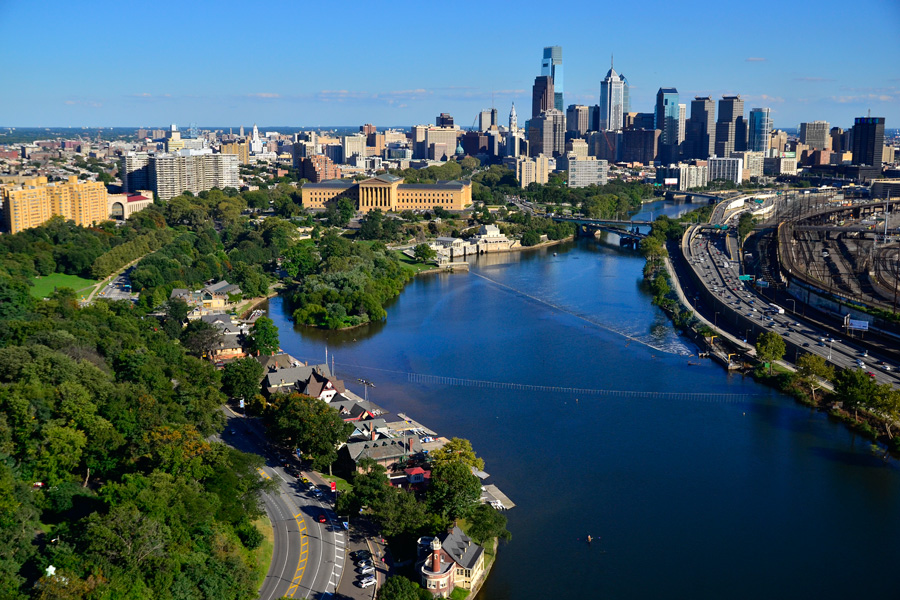 I picked him up at the North Philadelphia station at about 7 in the evening.  We drove home, out the West River Drive.  Hot, humid, green summer nights. We talked more in those drives than we did the whole rest of our lives added up.  He told me about his boy days, about school, life with a strict Scotch Presbyterian family, summers in Ocean City, New Jersey, and camping one summer with friends in Wissahickon Valley Park.  I wish I had gone home those nights and written everything down.  I didn’t!  But my lord do I remember the closeness of those hot summer nights driving home in twilight talks.

He left us a cassette tape recording where he talks about his family.  I did not have the courage to listen to it until 1999, 22 years after he died.  Oh dear, to hear him.  There is a Philadelphia accent that I didn’t remember. 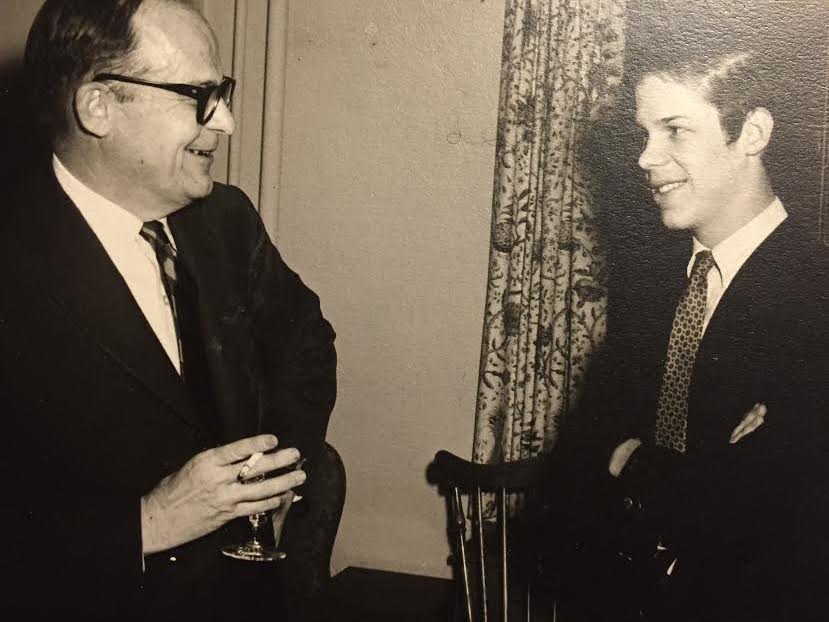 I can’t listen to Cat Stevens sing “Father and Son” without crying.  It was my anthem of protest in those years.  It is my anthem of loss now.  My father had a stroke on July 1 1970, commuting to New York.  It was the day of my selective service lottery.  I had declined a student deferment, had burned my draft card, and was registered 1A.  He was so afraid for his son.  Shaped by the Depression, he could not imagine the path I was choosing.

I thought that his 100th birthday would be joyful for me.  It might yet.  So far it is only the sense of loss for a father I loved who has been gone so long.

He signed letters to me “As ever.”  I once found that impersonal.  I don’t now.

As ever, your son, Tom, whom you sometimes called Tommy.